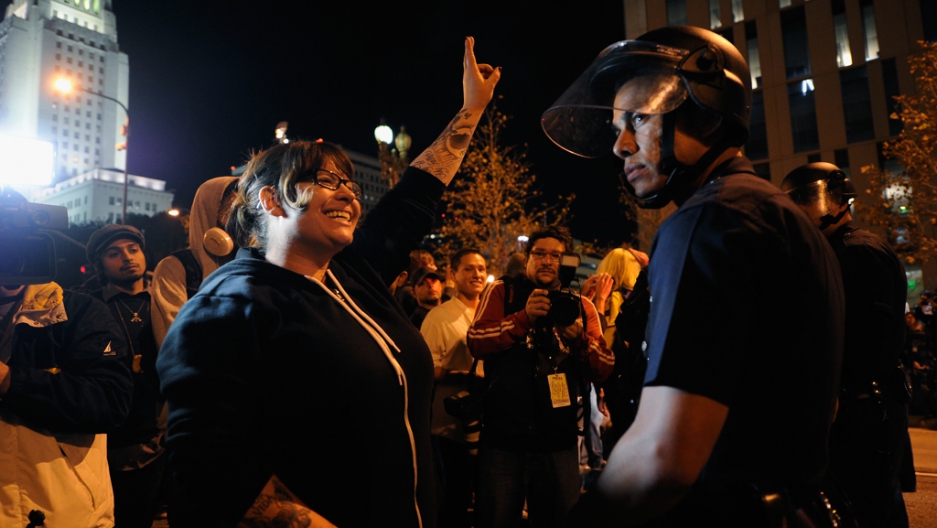 An Occupy LA protestor blocks the street in front of a police officer near the Los Angeles City Hall after the deadline to dismantle the Occupy campsite expired on November 28, 2011.
Credit: Kevork Djansezian
Share

Rubber bullets were used, though sparingly, when around 500 Los Angeles Police Department officers stormed the camp.

Speaking at a news conference afterwards, Police Chief Charlie Beck said the arrests were mostly peaceful and nobody was injured.

The arrests were made after some protesters booed and refused to leave when an unlawful assembly was declared, and they had been given 10 minutes to vacate.

The LAPD had issued the first eviction warning at 11:20 p.m., reported Neon Tommy, the digital news site of the University of Southern California.

Protesters set up barricades to block the police, and some set off fireworks in the camp, reported the Los Angeles Times.

The Times reported that hundreds of LAPD officers have deployed from their staging ground at Dodger Stadium toward downtown Los Angeles.

An LAPD police helicopter announced the commencement of the department's action, flying low and circling the City Hall steps and flooding the encampment with its spotlight.

The Washington Post reported that LAPD had closed off all the streets surrounding the park in front of City Hall.

According to a live blog of the action by Neon Tommy, Carol Sobel of the National Lawyers Guild met with LAPD officers about police action against the protesters.

Los Angeles Mayor Antonio Villaraigosa told protesters they had until Monday at 12:01 a.m. to clear out the park outside City Hall. About half of the 500 tents remained past the deadline, reported the Associated Press.

Meanwhile, early Wednesday morning police cleared out the Occupy Philadelphia camp and protesters began to march in the streets, CBS News reported. The protesters were given three warnings to evacuate.