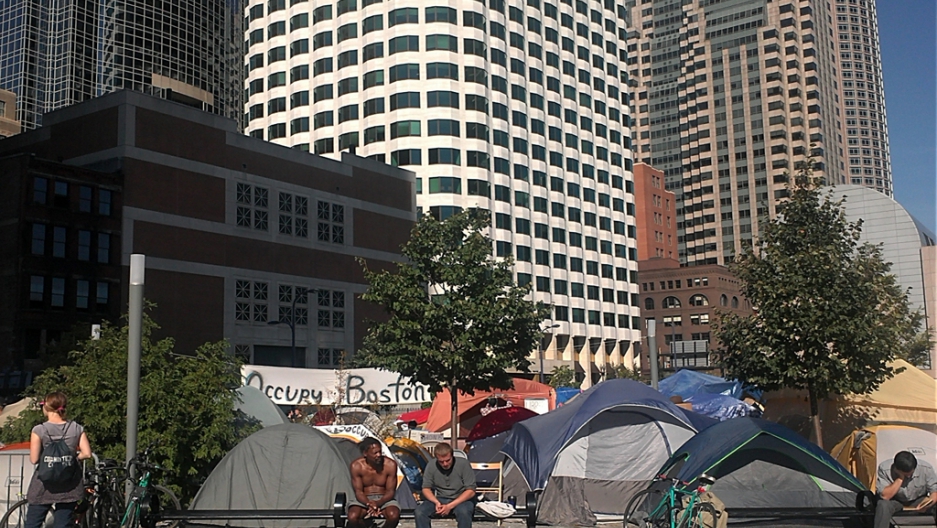 BOSTON — A court hearing Thursday may determine the fate of the Occupy Boston encampment, as the city takes steps to evict the protesters who have pitched tents in the city’s financial district since early October.

The Boston news comes on the heels of more than 200 arrests in Los Angeles and 50 in Philadelphia early Wednesday when demonstrators refused to obey police orders to leave their grounds. This leaves the Occupy Boston camp as one of the most prominent in the country.

Boston’s 200-page eviction document, filed in court on Tuesday, said that the protesters sleeping in the dozens of blue and grey tents in Dewey Square, by the Rose Kennedy Greenway park, have no legal rights to continue living on public property, according to the Associated Press.

The Boston protesters have already begun distributing small, red “Occupy Your Right” flyers urging people to gather in front of the courthouse for the hearing on Thursday.

“We’re too big to shut down, even if we lose the park,” said 22-year-old Mike Michaelson. “If we’re evicted, we’re going to try to keep moving on.”

The occupiers face a variety of opponents who seek their ouster, including Boston Mayor Thomas Menino, who had previously said he supported the Occupy movement.

“I want to have the tools to remove them from the Dewey Square area,” he said in an interview with WCVB-TV, a local television station in Boston.

Complaints of drug sales and unhealthy living conditions were cited in a Nov. 8 letter to Menino by the Rose Fitzgerald Kennedy Greenway Conservancy, the organization that oversees the park.

The protesters readily admit some violence and drug use at the camp.

In the latest incident, a man claiming to be living in the Occupy camp was arrested Sunday after he allegedly threatened to stab a man at a nearby subway station.

But some occupiers said they would be surprised if crime had not somehow creeped into the camp, since tents were set up almost two months ago.

“You have to consider that this is a community built within a messed up society,” Jeff Nunes said as he sat in a folding chair next to Michaelson, his friend. Nunes said drugs and violence aren’t concentrated in Occupy tents across the country, but that it’s a reflection of the outside world’s problems.

The 17-year-old high-school dropout said he decided to join Occupy Boston because he is “fighting for injustice everywhere” and for those whom he said need the current system to change, like his mother and father.

Nunes said growing up he watched his parents, both emigrants from Brazil, try to attain the “American Dream.” Instead of finding success in the United States, both ended up in dead-end jobs, unable to support their son.

Nunes said he was sent to live in foster homes for two years, and he eventually dropped out of high school to find work.

By the time he ran away from his last foster home, he said he realized he was at an important crossroads in his life: either join the military or join the movement in Boston. He has been occupying Dewey Square for almost two months now.

“It pretty much changed my life,” Nunes said about the movement. “It’s the best thing that could have happened to me.”

But no matter what it means to some of the occupiers, the fate of the encampment is still uncertain, especially at a time when many other Occupy locations around the United States seem on the brink of eviction or have already been removed.

In New York’s Zucotti Park, tents and generators have been banned from the park area, though protesters can still demonstrate.

But in Boston, many of the protesters said they won’t let anything disrupt the Occupy movement’s progress — even if it comes to eviction.

“The movement is going to keep going, because there are a lot of people out there who really need it and a lot who really care about it,” he said.

Michaelson, who sported a worn black baseball cap reading “Boston — the city of revolution,” nodded in agreement with Nunes as they sat together near the entrance to the camp.

“If this movement is successful, which as long as I’m alive I’ll make damn sure it is, it will affect everyone in the future,” Michaelson said. “This is for my kids and my kid’s kids.”