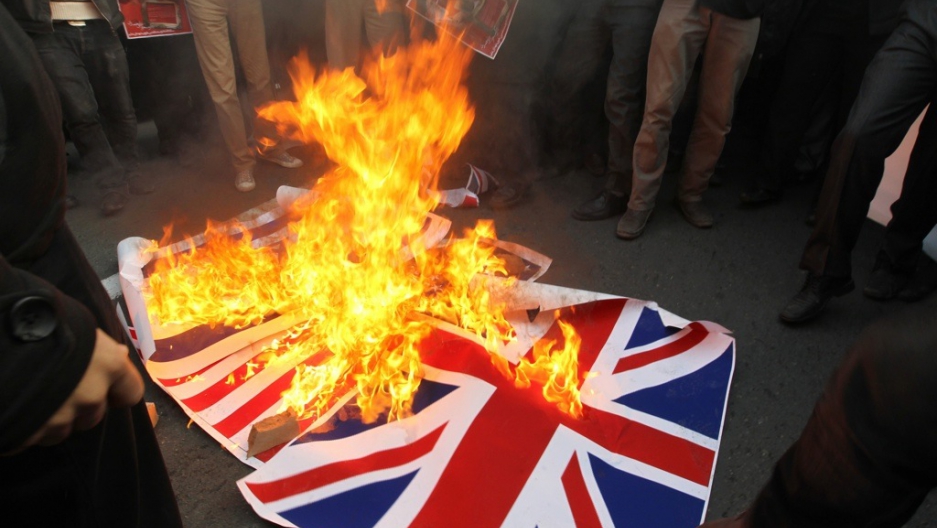 TEHRAN, Iran — When Iran’s finance minister appeared in front of parliament earlier this month to defend himself in a $2.8 billion banking scandal that implicated several members of President Mahmoud Ahmadinejad’s administration, analysts were certain that the president’s days were numbered.

The scandal appeared particularly egregious in light of the economic pressure placed on Iranians by international sanctions. And calls for justice quickly rang out.

But in a surprise decision, parliament voted to retain the minister, indicating that perhaps Ahmadinejad is on firmer political ground than many had thought.

The scandal, however, represented one of the most serious challenges to Ahmadinejad’s presidency and underscored a deepening rivalry in Iranian politics — one that could represent a lost opportunity for the United States and the West if Ahmadinejad loses.

More from GlobalPost: Top 10 ways the US tries to subvert Iran

Challenging the president is a growing conservative movement that disapproves, among other things, of his diplomatic overtures to the West, and even more so of his belief that non-clerical leaders are just as legitimate as clerical ones.

On Tuesday, Iranian students stormed the British embassy in Tehran in reaction to economic sanctions placed on Iran by the United Kingdom. The dramatic protest, which appeared to be tacitly allowed by Iranian authorities, came several days after the Iranian parliament endorsed a bill to expel the British ambassador and downgrade Britain’s diplomatic status.

Iranian analysts said the entire spectacle was a striking example of the conservative movement’s growing power.

"They always look for the opportunity to take Ahmadinejad on and discredit him by challenging whatever he proposes,” said one Tehran-based analyst who asked not to be named. “The most recent example is UK ties. Ahmadinejad has not once spoken about downgrading ties but the [conservatives] started the campaign to expel the envoy and successfully got the bill approved.

“Ahmadinejad, as unlikely as it may seem, is the most moderate Iranian official there is and if he was not constantly challenged, discredited and his plans stopped at home and internationally, he would make more concessions and normalize Iran’s relations with a good part of the world.”

Over the past several months conservatives have accused Ahmadinejad and his closest associates, most famously his chief of staff, Esfandiar Rahim Mashaei, of being part of a “deviant current” that is seeking to upend religious rule inside the country.

Ahmadinejad’s penchant for traveling to New York and the locally accepted belief that he would mend ties with Washington if not for his own domestic political challengers have long created suspicion among the conservatives, who adhere to the state ideology established when the Islamic Republic was first created in 1979.

It didn’t help that Mashaei is on record saying, in 2008, that, “Iran is friends with the American and Israeli people. No nation in the world is our enemy, this is an honor.”

Anti-Zionism and anti-US imperialism are twin pillars of the Iranian ideological system. The Islamic female dress code is another, and Ahmadinejad has long argued that it is not the government’s job to police what its citizens wear.

Conservatives consider such views to be completely incongruous to the system they hope to maintain. And the fact that politicians, rather than religious leaders, are promoting such changes makes the threat even more real, according to political analysts in Iran.

More from GlobalPost: Iran is building a nuclear bomb. So what now?

At the height of the reform movement between 1997 and 2003, then-president Mohammad Khatami and his allies made no attempt to amend the constitution — which is rooted in Islamic law — or the accepted order of business.

Even during the weeks of protests following the 2009 election, neither of the de facto opposition leaders, Mir Hossein Mousavi nor Mehdi Karroubi, called for the dismantling of the system they helped build. In fact, more than anything, they wanted the constitution to be upheld.

If the conservatives succeed in ousting Ahmadinejad, experts say any opportunity for the West to open diplomacy with Iran will be that much harder, a belief made starker by Tuesday’s storming of the British embassy.

Members of Iran's powerful Larijani family, who hold so many posts in the Iranian government they are sometimes compared to the Kennedys, are leading the conservative tide and are the most-ardent supporters of Surpeme Leader Ali Khomenei and his ideological rule.

“The Larijani brothers and other like-minded Iranian insiders have risen to power based on their fealty to the Supreme Leader, and are thus unlikely to say or do anything out of step with Ayatollah Khamenei,” said Reza Marashi, research director at the National Iranian American Council.

The most well-known of the Larijanis is Ali, Ahmadinejad’s longtime political foe and a losing candidate in the 2005 presidential election. He previously served as Iran’s nuclear negotiator and is now the speaker of the parliament. He has relentlessly pursued corruption allegations against his rivals and he is expected to run for president again in 2013.

His brother Sadeq is the head of Iran’s judiciary. This branch of the government repeatedly blocked Ahmadinejad’s attempts to release the American hikers held on spying charges. They were finally released on bail on Sept. 21, after serving two years in a Tehran prison.

A third brother, though, is perhaps the most controversial in the family. Mohammad Javad Larijani studied math at the University of California at Berkeley and is the head of Iran’s human rights commission.

Earlier this month he appeared live on MSNBC, where he said, “The United States of America is the largest and the greatest country supporting terrorism.” He is also remembered for a 2010 incident in which he called US President Barack Obama the Farsi equivalent of the "N" word.

Their first cousin, Ahmad Tavakoli, runs a body called the Parliamentary Research Center; a somewhat benign name for the location of Iran’s classified documents, and has therefore been the source of many of the allegations of fraud and corruption against the family’s rivals in government, including Ahamdinejad's finance minister.

The looming power of the Larijani family, and the threat it poses to the president, is worrying to the West and, experts say, could leave the United States and Britain with an even more fickle enemy than it has now.

"Their view on engagement with the West has long been grounded on suspicion of Western intentions and ability to fulfill their end of any negotiated compromise," Marashi said of the Larijanis.