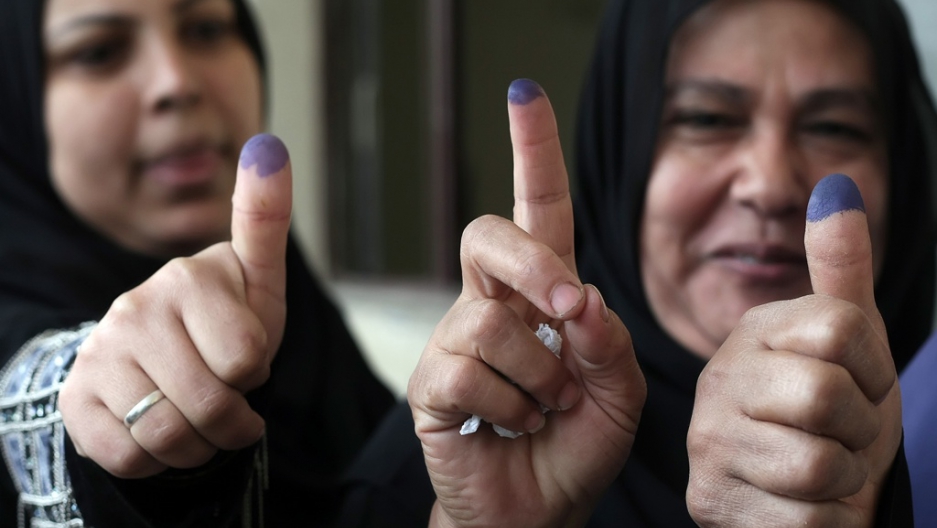 CAIRO, Egypt — Egyptians came out in record numbers to vote this week in round one of the country’s parliamentary elections, the first since the ouster of the autocratic former president, Hosni Mubarak, in February.

Thousands of voters waited patiently in seemingly endless lines at polling stations around the capital, eager to dip their fingers in the purple phosphoric ink to signify that they had cast a ballot in the nation’s historic race.

Unofficial estimates, including government reports in state media, placed the voter turnout at well over 50 percent just after the final polls closed on Tuesday.

Overall, Egyptians seemed confident that this latest vote was a drastic departure from the murky days of Mubarak-era elections, which were frequently marred by fraud and vote-rigging.

More from GlobalPost: Was Egypt's revolution just a military coup?

And they were optimistic that the country was finally clearing its first significant hurdle in the long transition to democracy.

“This time it really felt like a free and fair election,” said an excited Ahmed Eissa, who had just voted in Cairo’s working class neighborhood of Boulaq. “In the past, people from the government would come into polling stations and literally force us to vote for certain candidates.”

The apparent success of the elections, which came on the heels of a week of violent clashes between police and protesters in Cairo, seems to have muffled some of the loudest anti-government voices in Tahrir Square — for now at least.

Tens of thousands of demonstrators descended on Cairo in the days before the vote to demand the military relinquish power to a civilian government.

The protests flared after the deaths of more than 40 people in resulting clashes with security forces.

But during the two days of voting in Cairo, Tahrir Square was relatively empty. Only a couple thousand of the most diehard protesters remained camped out in tents, chanting against the army. Even the dozens of young vendors hawking revolutionary trinkets along the streets in the square seemed to be bored.

In long lines at overcrowded polling stations, many Egyptian voters rejected the idea that ongoing street protests were the only way to affect real political change in the country.

“Tahrir doesn’t speak for the whole country,” said Heba Shunbo, a liberal voter in the upscale neighborhood of Zamalek, echoing comments made over the weekend by Egypt’s military leadership.

“What will protesting actually provide for the country? Even if my party doesn’t win, we have to vote. Isn’t that democracy?” she asked.

For three decades, Egyptians watched from the sidelines, powerless to prevent Mubarak’s ruling party from winning by laughable margins on election days. Many voters cried foul with allegations of ballot-stuffing and state-sponsored violence.

This time around, although there were massive improvements, the vote wasn’t exactly flawless.

The late arrival of ballots and judges, and overcrowding at small polling stations, left some voters waiting for up to seven hours. Many parties openly broke the law by campaigning during the two-day election, sometimes even outside polling stations. One administrator was even taken hostage by frustrated voters, according to local reports.

Others were baffled by the complex rules that required people to vote for both parties and candidates on two separate ballots.

“I didn’t recognize any of the names I voted for. I just chose randomly,” said 72-year-old Fawzy Mohamed in downtown Cairo. “I just hope my voice helps to give us a more stable and secure Egypt.”

The convoluted electoral process, critics said, was only the latest in a series of mismanaged steps implemented by Egypt’s transitional military rulers, who assumed the reins of power following Mubarak’s ouster.

Following the clashes in Cairo last week, some in Tahrir had urged their fellow Egyptians to boycott the elections.

“If Tantawi leaves, then I would vote. Otherwise, my vote will never make a difference if we are still living under military rule,” said Ezzat, 22, who stayed true to his word and did not vote.

The calls to protest at the polls, however, seem for the most part to have fallen flat.

Many voters in Cairo said they were actually supportive of continued military rule to maintain political and economic stability following the week-long clashes that left parts of the capital resembling a war zone.

“These people in Tahrir want the country to burn. Do they want to turn Cairo into Beirut? We need the military in power for security,” said Nabil Adly Mohamed, 54, after voting in a polling station a few blocks from Tahrir Square.

The biggest winner in this debate may have been the Muslim Brotherhood, which lost some popularity among those camped out in Tahrir for ignoring pleas to return to the square after the clashes.

Most observers said the Muslim Brotherhood’s Freedom and Justice Party was poised to make major gains throughout the country, especially in the northern Delta region near Alexandria, Egypt’s second largest city.

Although most Egyptians still resent military rule on some level, the once-banned Muslim Brotherhood, appeared willing to tolerate it for the time being — if it meant a long-awaited opportunity to participate in Egypt’s political arena.

The issue of transitional military rule is a lingering complaint that will not be resolved by these parliamentary elections — which will not even finish until early 2012.

“Calls to boycott these elections are just wrong. Voting at polls is the only way to affect positive change in the country,” said Ahmed Osman, a member of the Muslim Brotherhood’s Freedom and Justice Party.

“And if we don’t get things right this way, we can always go back to Tahrir,” he said.