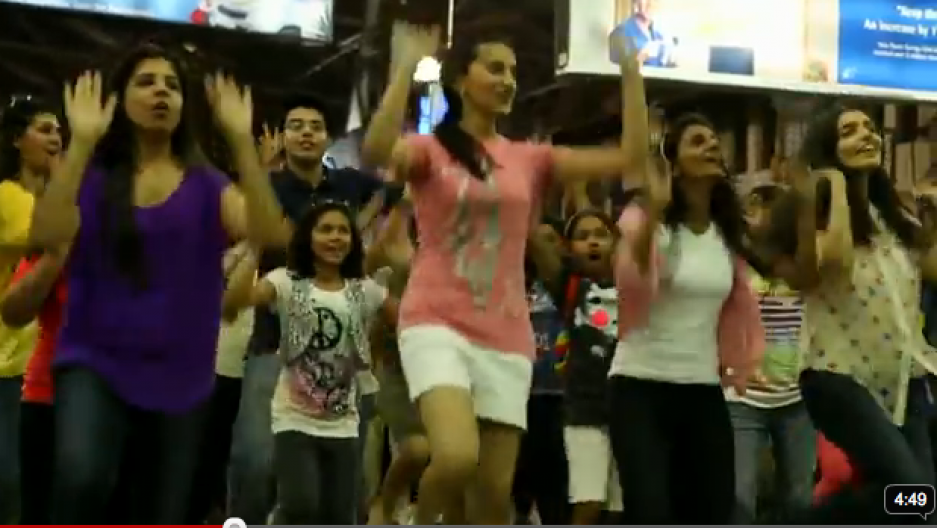 For the past three years, Mumbai's historic Chhatrapati Shivaji Terminus (CST) train station has been known primarily as one of the major sites attacked when Pakistani gunmen held Mumbai under siege for three days in November 2008. Not this week.

Now, CST is being referred to as the site of a Bollywood-inspired flash mob dance party.

About 200 people gathered at CST Sunday and surprised commuters by suddenly breaking into dance. The video of the dance, shown below, has quickly gone viral in India.  A YouTube version has been viewed close to 50,000 times, and the video was featured on local Indian sites like NDTV plus international news sites like the New York Times and Washington Post.

The edited video begins with a scene of a crowd of passengers waiting on platforms as they prepare for their train to arrive. Suddenly, a thin young woman dressed in stylish jeans begins dancing to the title track from the Bollywood film, Rang De Basanti. Another young woman joins her, a crowd begins to form around them and soon a whole collection of young people are dancing together.

The dance took a month to plan, according to one of the organizers, Shonan Kothari, a former researcher for Harvard Business School.

"One of the top items on my travel to-do list, which I never got around to in Europe, was to be a part of a flash mob,”  Kothari told the Times. “Since India didn’t have anything of the sort, I figured I’d do it myself."

Watch the video, which says it was filmed on November 27, below.