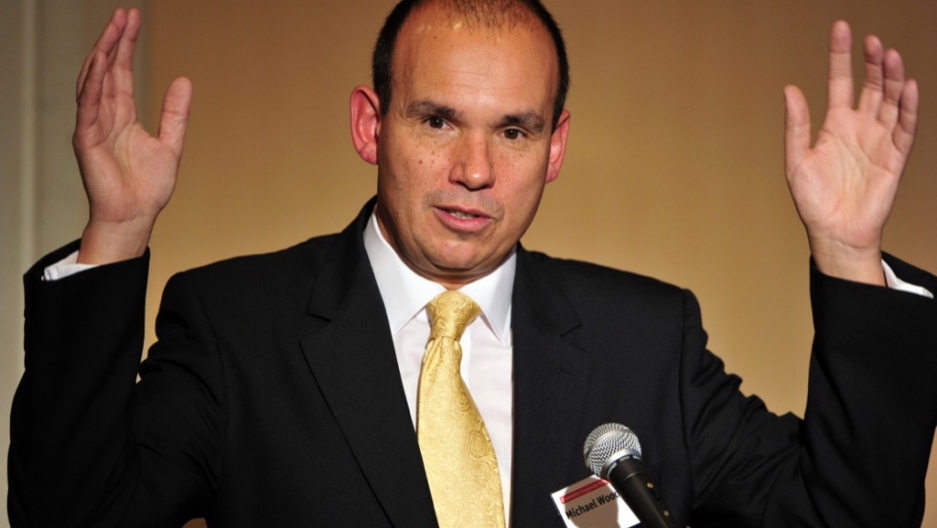 Former Olympus president Micahel Woodford gestures as he delivers a speech at a seminar in Tokyo on November 24, 2011.
Credit: Yoshikazu Tsuno
Share

TOKYO, Japan — The drama unfolding at Olympus, according to none other than its chief protagonist, is worthy of a John Grisham novel: questionable takeovers and dubious payments to accounts in the Cayman islands, an FBI investigation and the possible involvement of organized crime.

The discovery of the firm's opaque accounting practices raises questions about the health of corporate governance in the world's third-biggest economy and the dim prospects for further foreign infiltration of Japan's conservative boardrooms.

On Nov. 25, the saga reached fever pitch as the man who blew the whistle on financial misdeeds at Olympus, as distinguished a Japanese company as you will find, returned to Japan to talk to police and confront former colleagues who have now become his foes.

In the month since he was ejected from his position as Olympus chief executive, Michael Woodford has launched a crusade to discover the truth of a scandal that could lead to the firm's delisting from the Tokyo stock exchange, a move that would threaten its very existence.

More from GlobalPost: Olympus admits to covering up losses

The 51-year-old Briton, who rose to the top of the Japanese camera and medical devices company just weeks before his sacking, shocked investors when he claimed that the firm had hidden investment losses for two decades, using some of $1.3 billion spent on dodgy mergers and acquisitions to conceal its failures.

"This is a bizarre situation that I find myself in," Woodford told a packed press conference in Tokyo. "I find myself in this John Grisham novel. Flying to New York to meet the FBI, references to organized crime, boardroom conflicts, character assassination. It has been stimulating."

His suspicions were aroused last summer, when an article in a little-known Japanese magazine, raised questions about Olympus's 2008 acquisition of the British medical equipment maker Gyrus for 210 billion yen, including an astonishing 70 billion yen ($900 million) to two investment advisers based in the Cayman islands.

Doubts were voiced, too, about Olympus's acquisition of what Woodford has described as three "Mickey Mouse" Japanese companies, including a cosmetics manufacturer, which had no connection with its core business.

But the bombshell that sparked febrile coverage in the foreign media was the accusation, as yet unproved, that Olympus may have enlisted the help of organized crime syndicates, known in Japan as yakuza, to hide the losses.

When Woodford confronted the company's then-chairman, Tsuyoshi Kikukawa, he was told to catch a bus to the airport. He was immediately relieved of the keys to his apartment, two mobile phones and company car, and marched off the premises in genuine fear of his life.

But before he boarded a plane back to the UK, Woodford went to the foreign media, sparking a scandal that, weeks after the revelations, continues to enthrall and appall Japan in equal measure.

In response, Olympus said Woodford had been dismissed for failing to understand the firm's management practices. His approach, it said, "caused problems for decision-making."

But it wasn't long before Woodford was vindicated: the company has since admitted that a $687 million advisory fee paid to a now-defunct fund based in the Cayman islands was used to cover up investment losses dating back to the 1990s.

His much-anticipated return to Japan coincided with the resignations of three Olympus board members, an act of contrition apparently designed to deflect criticism.

More from GlobalPost: Climate changes rice and culture in Japan

But the firm will be automatically delisted if it fails to report its revised earnings by Dec. 14, or if investigators uncover evidence of yakuza involvement and gross inaccuracies in previous financial statements. Delisting would leave the firm vulnerable to a takeover — an ignominious end to a company with a 92-year history.

On Nov. 25, Woodford, fresh from an Olympus board meeting, told journalists that discussions with his former colleagues had been "constructive," if devoid of handshakes or an apology from the men who fired him on Oct. 14.

"There was a tension in the room, but there seemed to be an understanding that it was in no one's interest to raise the temperature," he said. "They didn't shake my hand and I didn't offer mine. We said good morning and goodbye."

In signs that the rancor of the past four weeks is abating — if only a little — Woodford made a point of praising Olympus employees and said he hoped the firm would not be removed from the Tokyo stock exchange.

His return, to a predictable media scrum, and the trio of resignations have at least given Olympus stocks a much-needed lift: shares closed up 8.6 percent on the day he met the press, although the firm has still lost 55 percent of its value since the scandal broke.

Woodford, who remains an Olympus director despite his sacking, said he had no evidence of a yakuza connection, echoing the findings of a third-party panel appointed by the firm to look into its accounts.

While his claims are being investigated in Japan, the UK and the US — It has a 70 percent sahre of the global endoscope market, and foreign investors have been quick to voice their dismay — Woodford appears ready to step out of the limelight for now.

He said he would return to Olympus if that's what shareholders want, but would not be banging on the boardroom door. "I'm not begging to come back," he said. "I didn't volunteer for this, I'm not a hero."

He told reporters his aim was to secure the resignation of the entire Olympus board so that the firm could put its house in order and move on, adding that he felt no schadenfreude at the prospect of delisting.

"I just see a lot of suffering and misery for no gain," he said. "But we should have the investigation, it shouldn't be fudged."

Whether or not investigations by the FBI, Britain's serious fraud office and Japan's securities and exchange surveillance commission shed more light on the matter, the debacle has raised doubts about ethics in the upper reaches of Japan's business world.

Even the prime minister, Yoshihiko Noda, said the scandal could harm his country's international reputation. If such stunning losses could remain hidden for so long at Olympus, what of other companies?

Having initially been happy to watch the foreign media air the firm's dirty laundry, the domestic press has finally grasped the gravity of Woodford's revelations.

The Yomiuri Shimbun, a conservative broadsheet, said in an editorial that this and other corporate scandals had "jolted international confidence in Japanese firms' ability to fulfill their social responsibilities, such as sound management and public disclosure."

Woodford, meanwhile, didn't disagree with the suggestion that the Olympus scandal would put the brakes on senior foreign appointments to blue-chip Japanese companies. "After my experience, do you think they are queuing up?" he said.

"Japan does need people to challenge and scrutinize. What Japan should do is look around the world for the best human resources ... it would be sad if no more gaijin [foreigners] come."