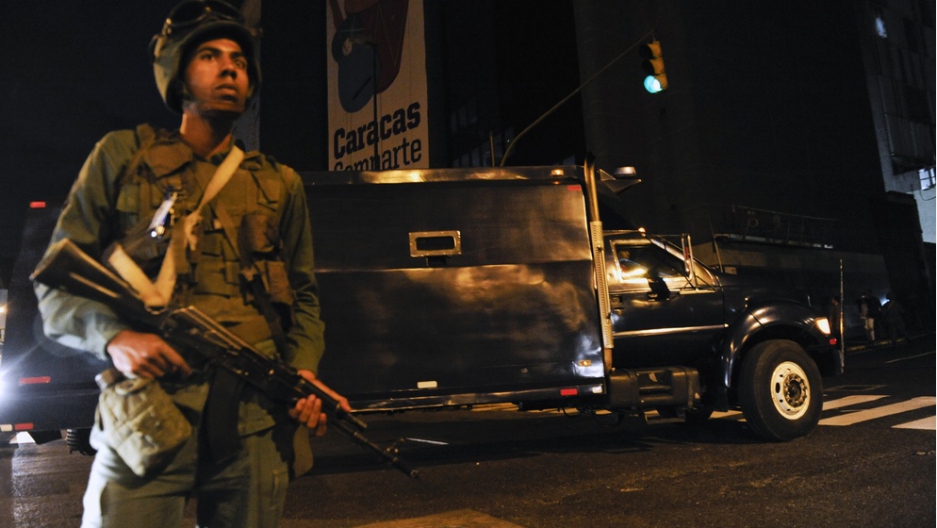 Repatriated Venezuelan gold, on its way to the Central Bank in Caracas.
Credit: LEO RAMIREZ
Share

Editor's note: This article is part of an ongoing series about the scramble for Latin American gold, which has only intensified amid the global turmoil.

CARACAS, Venezuela — Venezuela’s Hugo Chavez is going for his gold.

The first shipment of more than 200 tons of Venezuelan gold reserves returned to Caracas last Friday, with Chavez supporters dancing in the streets as tanks rolled in with armed soldiers riding on top of pallets of ingots.

Chavez had said that he planned to recall all of the country’s gold reserves — kept in the United States, Europe, Canada and Switzerland — to Venezuela.

On top of this, the country’s domestic gold trade — a hodgepodge industry that Chavez has said is in the hands of “mafia and smugglers” — is to be nationalized.

The moves shore up Chavez’s plan to end the “dictatorship” of the US dollar, as he calls it, and feed his ongoing war of words and ideology with Washington as elections loom in less than a year.

“The Yankees are broke,” Chavez said from the balcony of his Miraflores presidential palace as he celebrated his birthday in August. “They have no money to pay their debt ... Shall we give Obama a loan?” the president asked the gathered crowd.

It’s also a clear way to fill his coffers ahead of what’s likely to be the most contentious election campaign for Chavez yet, as well as to make sure that it can’t be frozen or seized should he run afoul of his Western rivals. The rhetoric appealed to Chavez’s supporters, whose votes the president is keen to secure as elections draw near.

Chavez continues to remain popular among the poor. He has courted their favor with a recent pledge to nationalize private property on the idyllic Caribbean islands of Los Roques.

However, electricity blackouts, soaring inflation and one of the world's highest crime rates have made many Venezuelans wonder whether it's time for change after 12 years of Bolivarian revolution.

“This is a political move,” said Jose Guerra, a former Central Bank official, now working as an economist in Caracas. “Chavez can say, ‘The gold is now in Venezuela, so we’ve recovered our dignity … and the reserves are now in the Central Bank.’”

With the death of his friend Muammar Gaddafi, who wrote to Chavez as his own regime crumbled, the Venezuelan president has become paranoid about being ousted from power.

“Chavez thinks that the West want him next,” said Carlos Romero, a political scientist at Venezuela's Central University in Caracas. “So it is better to have the jewels at home.”

They may not be planning regime change, but some foreign companies have brought suits against Venezuela for what they say were illegal expropriations.

Arbitration proceedings are being heard at the World Bank’s International Centre for Settlement of Investment Disputes and Venezuela, ultimately, may have to cough up for the assets it has seized. If, however, Chavez ignores the court, those foreign companies will have no chance of compensation if Venezuelan assets are not even on friendly countries’ soil, leading many to suggest this may be the real reason behind the move.

Shipping gold is extremely costly because of its immense insurance premiums. Despite this, Chavez is determined to move ahead.

While international gold reserves return home, the country’s domestic gold mining industry — around half of which is illegal —is to be brought in from the hands of “mafia and smugglers” to those of its own government.

The country produces around 11 tons of gold per year with another 10 to 11 tons extracted by illegal miners, according to Chavez. State oil — and now gold — company Petroleos de Venezuela is to hold the majority stake of 55 percent in all gold-mining ventures.

The country’s only publicly traded gold miner is now Rusoro, a Russian company listed in Canada. It will officially join forces with Petroleos de Venezuela in the middle of December, owning the maximum-allowed 45 percent share of the joint venture.

“We expect to receive compensation,” said Andre Agapov, Rusoro's chief executive. “We have a few weeks to wait, and we’re hoping for the best.”

However, there may be struggles ahead. “If we don’t reach an agreement, we have to look for ways to be compensated,” said Agapov. “This has drastically changed our operations in Venezuela. We’re not exporting gold any more. Our market capitalization is on the floor. We’re in limbo and we’ll be in that state until mid-December.”

Still, Agapov is hopeful. His father, Vladimir Agapov, was a top executive at Russia’s Aeroflot airline who Andre says knows Chavez personally. “I think Venezuela will show us some respect and will take care of Rusoro,” the younger Agapov said.

“We’ve created so many direct jobs. We produce more gold than anyone else.”