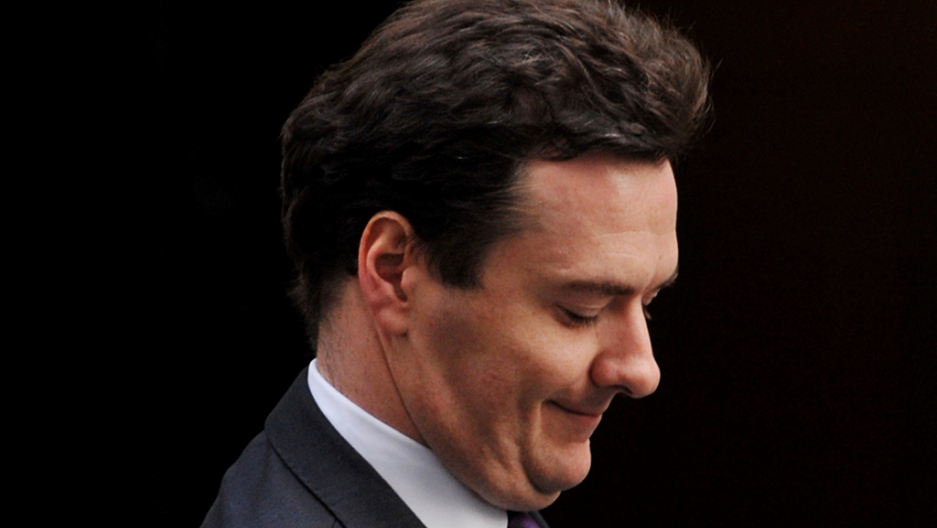 Chancellor of the Exchequer contemplates the numbers on his way to Parliament today
Credit: BEN STANSALL
Share

In Britain, the government's budget is presented to Parliament in March, by the Chancellor of the Exchequer. Then in the autumn, he makes another speech updating his plans based on half-yearly economic data. Today, George Osborne had to do more than update, he had to admit his long term goal of eliminating Britain's structural deficit by 2015 would not happen. He also had to acknowledge that his figures for government borrowing would have to be revised upwards by £39 billion ($60.9 billion).

Osborne also had to admit that the risk of recession was very real. "If the rest of Europe heads into recession it may prove hard to avoid one here in the UK," he told the House of Commons.

Blaming the euro zone's debt crisis for tipping Britain to recession may have some truth to it but the increased borrowing is strictly on the Conservative-led coalition government's head. Osborne made deficit elimination via austerity the centerpiece of his economic strategy.

He learned one lesson of political economics very well on his swift rise to prominence: if you inherit a weak economy get the painful stuff done to make it grow early in your term of office, hopefully people will forget about the pain, if the next election is held during a period of gain.

His austerity plans cut far and fast. Osborne was told this would increase unemployment and it has. Increased joblessness has led to pronounced consumer pessimism. Shops are closing, putting more people out of work. Paying several hundred thousand more people unemployment benefits is driving up debt.

So Osborne is now looking to a kind of semi-Keynesianism. He announced today there will be £5 billion for infrastructure projects - 500 have been identified. But the Chancellor said he wanted private pension funds to invest up to £20 billion in those projects. No word yet from the pension funds on whether they will invest in the projects.

The other way Osborne is planning on saving money is by holding on to the current wage freeze across the public sector through next year, and then capping pay at 1 percent per year for the following two years.

With inflation at 5 percent that is the equivalent of ordering a 4 percent pay cut.

In an interesting bit of timing, tomorrow, many public sector workers, including most of the country's state school teachers, are holding a one-day strike over their pensions. The pay freeze is like pouring oil on the fire.