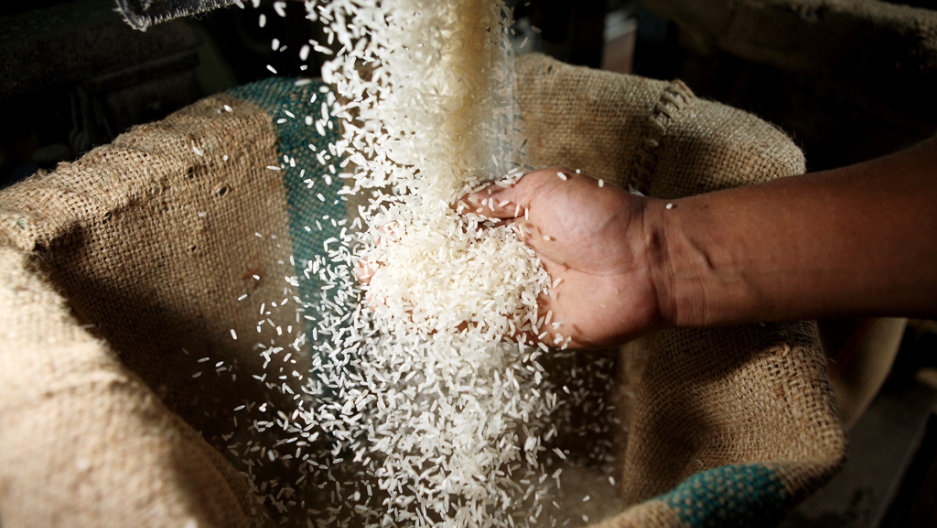 A Thai worker loads rice into a 50 kg bag at a rice mill on April 22, 2008, in Suphan-Buri, Thailand.
Credit: Chumsak Kanoknan
Share

BANGKOK, Thailand — While campaigning for office in June, Thailand’s Prime Minister Yingluck Shinawatra slipped into rubber boots, waded into a rice field and hopped aboard a rickety plow. She was flanked by two buffaloes and, of course, a photographer.

Though not much of a field hand herself — before taking power, Yingluck was CEO of a family-owned telecom firm — her photo-op sent a message to the 8 million Thai farmers who supply 30 percent of the world’s rice exports.

The message: Vote for me and I’ll take care for you. More specifically, vote for me and my government will buy every grain of rice you can harvest for nearly 50 percent above the market rate.

Her campaign pledge, which kicked in last month, has consequences far beyond Thailand’s jade-green paddies. It has already jacked up the cost of rice worldwide and price of dinner for many who eat the grain.

Elected in July, Thailand’s ruling party has promised to buy up rice at above-market prices: roughly $480 per metric ton of white rice and even more for higher-quality jasmine rice.

Depending on who you ask, this is either a compassionate welfare scheme or the end of Thailand’s grip on the global rice industry. Thailand, Southeast Asia’s second-largest economy, has exported more rice than any other nation since 1981.

Yingluck has proclaimed that Thai rice farmers — among her core political supporters — will finally be able to make a decent living. Her government has insisted that it can sell most of this rice directly to other governments.

But the plan has already hiked up global rice prices, by more than 15 percent, according to the International Rice Research Institute. The scheme forces private rice millers and exporters to compete with the government’s premium rate. The added cost is passed on to the consumer and, because Thailand’s rice price sets the industry benchmark, prices rise across the globe.

Though recent floods submerging one-third of Thailand will also drive up prices, the Thai Rice Exporters Association says this new policy is the main driver of price hikes. The group told Bloomberg that Thai rice exports from November-January will drop by half.

The plan’s opponents say the world’s poorest rice eaters may be forced to simply eat less rice or at least switch to noodles. One of the plan’s most vocal critics calls it a “crazy scheme” hinging on a false premise: that Thai rice farmers are destitute.

“Farmers have a very good racket going. It’s called ‘Farmers are poor’ ... and they’ve been living off that racket for a long time,” said Ammar Siamwalla, a former Yale University professor and president of the Thailand Research Development Institute.

Though harvesting rice is backbreaking and repetitive, most Thais regard farming as noble work that provides the nation with sustenance. As in Chinese, the word for “food” is the the same as the word for “rice.”

Laws protect the livelihood by forbidding foreigners from growing rice in Thailand’s fertile paddies. Yingluck’s government contends that they need even more protection given rising costs of pesticides, gas and fertilizer.

Some exporters, however, say the scheme could halt Thailand’s rice trade dominance — all over a plan to secure political loyalty from a rural minority.

But the subsidy, he said, is not a sorely needed lifeline for the farming poor. “I wouldn’t consider them poor,” Vichai said. “Nor would I consider them rich.”

According to Vichai, a typical Thai rice farming household can expect to pull in $320 per month. He notes that this is a typical salary expectation for a Thai college graduate’s first job. (Thailand’s 2009 per capita GDP, according to the World Bank, is roughly $3,900 or $325 per month.)

“They have a comfortable living,” Vichai said. “If they didn’t, they wouldn’t grow rice for us for such a long time.”

However, the president of the Thai Rice Mills Association, Chanchai Rakthananon, argues that a farming family getting by on that little per month is plenty poor.

Poor or not, rice farmers will ultimately suffer from the rice scheme, according to Ammar. “The minute the government takes over the rice business in any country,” he said, “the quality of the rice goes to pot.”

“We have to earn a high price by producing things of high value,” Ammar said. “The world market, whether you want it to be or not ... is a free for all.”

In recent years, Thailand has faced tougher competition from rice-growing rivals such as Vietnam. Thailand exported 9 million tons of rice last year, according to government figures, with Vietnam’s 6 million tons following not too far behind.

But all that competition, while bad for Thailand, could prove to be a blessing to world’s rice-eating poor.

Heavier output by competing exporters — such as Vietnam, India, Argentina and Guyana — may be able to stabilize the market if Thailand exports less. A leading economist at the Philippines-based International Rice Research Institute, Samarendu Mohanty, predicts that rising exporters will fill the gap and prevent a disastrous price hike.

Thailand’s rice scheme, he said, will kick in just as India erases a 2008 ban on rice exports, enacted to prevent its domestic food prices from soaring. “It’s very good that this is coming along when India’s re-entering the market,” Mohanty said. If India decided to export rice more aggressively, he said, “they could bring the market to its knees.”

Still, Yingluck, who rose to power by catering to rural voters, contends her rice scheme is a win-win.

Farmers will make a decent wage, she said, and stoke the economy by spending the government’s cash. As recent floods have submerged parts of Thailand, rotting crops and leaving more than 200 dead, Yingluck has again donned her rubber boots to inspect flood zones and reassert her devotion to rural Thailand.

But while shoring up appeal in upcountry Thailand, Yingluck may also be winning fans among Vietnamese rice exporters. Her scheme, according to US Department of Agriculture predictions, could cause Thai exports to drop by 20 percent next year — and potentially cede the world’s top exporter crown to Vietnam.