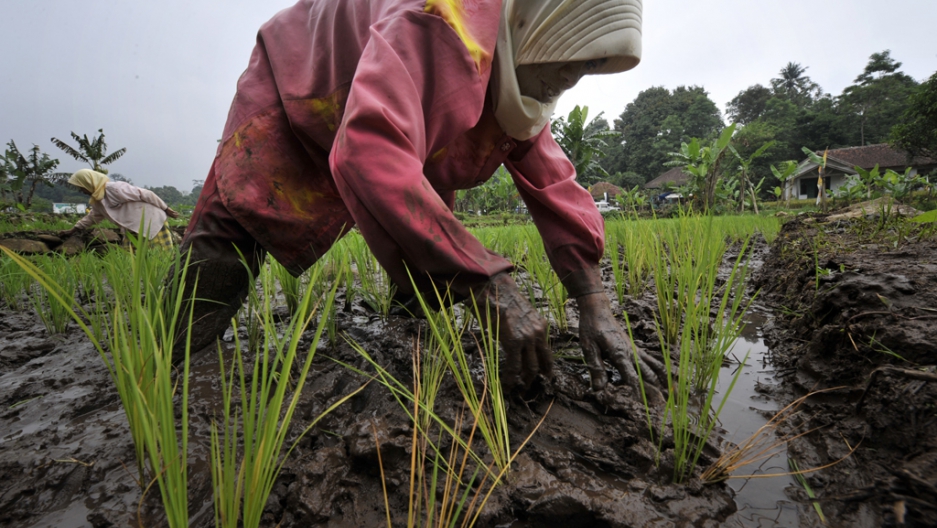 JAKARTA, Indonesia — Once the plat du jour in Indonesia’s remote province of West Papua, traditional staples such as sweet potatoes and sago have today been replaced with Asia’s favorite carb.

But with the nation overly dependent on rice, scientists say it’s high time to re-diversify.

“We have so many different types of food now, but Indonesians have to have rice three times a day,” said Indonesian journalist Desi Anwar.

For many Indonesians, breakfast, lunch and dinner is just not complete without an obligatory helping of rice.

“We have McDonald’s and KFC, but Indonesians still see these as snack foods. They go home and eat rice or nasi padang [traditional rice dish] after,” she said.

The irony is that several decades ago many Indonesians relied on staples such as potatoes, corn and sago, until former dictator Suharto forced everyone to eat rice.

Once awarded for its self-sufficiency in rice by the United Nations’ Food and Agriculture Organization, Indonesia is a now a net importer of all of its major staple food commodities, including rice, maize, cassava, soybeans and sugar.

Now the third-largest consumer of rice globally, the government imported 1.5 million tons of rice last year and is scrambling to sign more rice deals in the region and encourage the population to have one “rice-free” day a week.

The government is trying to encourage its 240-million-large population, which consumes 139 kilograms of rice per capita, to diversify their food production — a diversity that analysts say it is responsible for damaging in the first place.

Regions such as Sulawesi, Papua, Eats Nusa Tenggara, Madura and the Mentawai Islands off the coast of Sumatra, traditionally relied upon a broad range of staples other than rice.

Sprawled across some 17,000 islands covering vast ethnic and linguistic divides, Suharto’s rice policies were part of efforts to unify the Indonesian archipelago.

“The story of Suharto’s regime was the homogenization of Indonesia. From Banda Aceh to Merauke, Papua, all Indonesians had to eat rice to be in line with Suharto’s policy of nation building,” explained Yohanes Supriyono, an anthropologist from the University of Indonesia.

The policy, say analysts, has weakened the country’s food security, especially in the desperately poor region of West Papua.

“Rice cannot grow up in the moutainous areas of Papua but now people are very dependent on it. The weather and terrain make it difficult to distribute so people are starving,” said conservation scientist Ratna Supriatna.

Head of the climate change center at the University of Indonesia, Supriatna says that as rice crops are vulnerable to heavy monsoon rains and extreme weather conditions, re-diversifying is key.

Papua’s original staples — potatoes, taro and sago — were much more efficient than rice and don’t require expensive fertilizers or complex knowledge about cultivation and irrigation systems, he says.

But as rice continues to be heavily subsidized, traditional staples remain more expensive. So, there is little incentive to revert back.

“All Papuan children grow up on rice,” said native Papuan Dorus Wakum, “but it is not our culture.”

Wakum says that despite the cost, some Papuans are now returning to traditional staples in protest of what they see as Indonesian occupation of their land and culture.

While Suharto’s so-called homogenization program has fostered a dependence on rice, critics argue that his rice policy was an attempt to “Indonesianize” the native Melanesian tribes of West Papua.

Professor Supriyono spent several years researching the subject in Papua and says the local population was told that only “primitive” peoples ate sweet potatoes and sago.

“The message was conveyed by civil servants and teachers from Java. In local dialect they would say that developed people only eat rice,” he said. “In the 1980s parents told their children that if they wanted to be developed like people in Java they had to eat rice.”

Today, Few Papuans know how to cultivate rice — most rice fields in the province are owned by Javanese migrants — even though they remain dependent upon it.

It’s a policy that Supriyono argues was used to disempower Papuans and take control of the resource-rich province.

West Papua is home to one of the world’s largest gold and copper mines — an operation that provides the single largest tax payment to the Indonesian government. Suharto signed the deal on the Freeport-McMoran mine in 1967, just two years before a controversial referendum voted that Papua would become part of Indonesia.

Over recent months there has been growing discontent in the region. Workers at the giant mine are into their second month on strike, while Papuan separatists declared their independence from Indonesia at a planned congress in late October.

It is debatable how significant Suharto’s rice policies are to the current political and social havoc in Papua, but the government is under increasing pressure to resolve the issues and secure the nation’s food stocks.

The recent heavy flooding in Thailand is likely to affect future rice imports and rising rice prices are likely to hit Indonesia’s poor the hardest.

The government has planned a huge food estate in Meruake, West Papua, which is expected to produce almost 2 million tons of rice starting 2014, though it is unclear how much this will benefit local Papuans.

For conservation scientist Supriatna, the simple answer is to overcome the stigma associated with traditional staples and to eat less rice.

“Today there is a perception that if you are not eating rice you are a very poor guy and government programs for the poor are all about rice,” he said.

“But the important thing is to diversify for food security — to bananas, corn, sweet potatoes, cassava and sago… Indonesia needs to go back to its original diversity.”