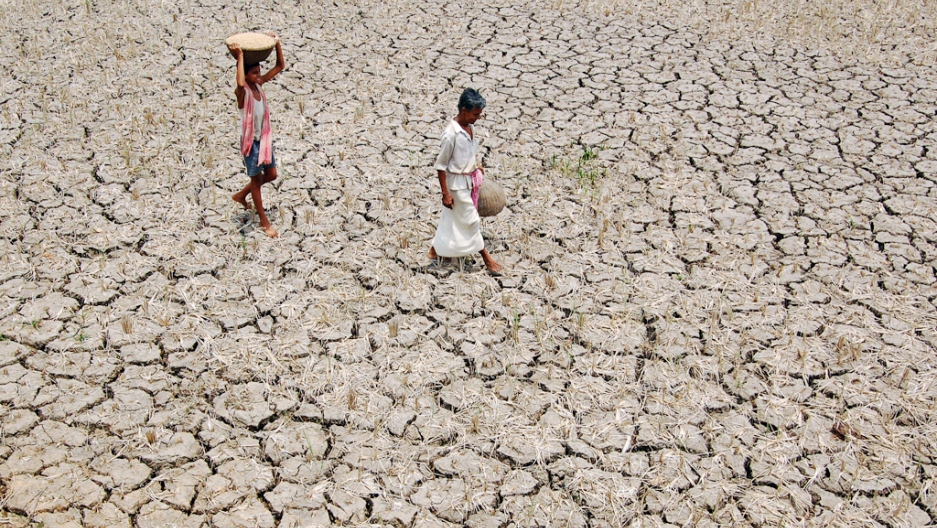 An Indian farmer and his son walk over their parched paddy field on the outskirts of Agartala. May 14, 2009.
Credit: Parthajit Datta
Share

NEW DELHI, India — When Ingo Potrykus and Peter Beyer unveiled genetically modified golden rice a decade ago, they promised to save millions of lives across India and other developing countries by providing the poor and malnourished a ready source of betacarotene.

But in India, opposition to genetically modified organisms (GMO) may well kill the initiative before it takes off.

“I have no hesitation in saying that we will make all efforts to stop it,” said Devinder Sharma, an agricultural researcher and farmers' advocate based in the Punjab.

In many respects, golden rice represents the fantastic potential of GM foods. But because of the method used to create it — piggybacking genes from maize on a kind of bacteria found in the soil to induce the plant to produce betacarotene in the rice kernel — opposition remains fierce.

Environmentalists fear the new variety might spread and overwhelm other native crops. Anti-globalization activists fear that the new technology represents the thin end of the wedge for multinational corporations seeking to make slaves of the small farmer. And advocates of organic farming fear that “tampering with nature” may result in unknown health costs.

“Sensible people should be aware that this [opposition] is not scientifically justified at all,” said Adrian Dubock, executive secretary of the Golden Rice Humanitarian Board and the architect of the project designed to distribute golden rice to the world's poor.

And those fears could be costly, according to Dubock. While the vision problems associated with Vitamin A deficiency are better known, it also causes immune system problems that are especially vicious among pregnant women and newborn children.

Proponents of technological solutions to the world's food and nutrition problems believe golden rice could be the answer.

After some tweaks to the original strain, the latest generation of the genetic modification — known as the r event — promises to provide as much as 50 percent of the recommended daily allowance of Vitamin A for poor people who consume as little as 40 grams of golden rice a day. At least one study of a theoretical plan to give the modified rice to poor farmers claims that it would be 50 percent more efficient than the current efforts to provide dietary supplements.

And the technology's inventors compelled the owners of the patent, a biotechnology company called Syngenta, to allow poor farmers around the world free access to the new variety as long as they earn less than $10,000 a year — ostensibly eliminating fears about industrialized agriculture that have plagued other GMO crops like Monsanto's Bt Cotton.

“All the normal arguments don't apply here,” said Dubock. “This is a gift from the inventors.”

Here in India, however, farmer advocates and environmental activists view that gift as a Trojan Horse.

“They are using the humanitarian window to actually push for GM acceptance. This is a PR exercise, nothing beyond that,” said Sharma. “Once you accept golden rice, you're accepting all kinds of GM crops. That's their agenda.”

How paranoid that sounds depends on your faith in the world's multinational corporations and multilateral aid agencies. According to a Golden Rice Project backgrounder, “If golden rice is successfully introduced, it will additionally facilitate similar projects in the future.”

Funded by the Bill and Melinda Gates Foundation, research is already underway on genetically modified bananas, cassava and sorghum — as well as another version of golden rice that incorporates iron, zinc, protein and Vitamin E. And Bayer, Mogen, Monsanto, Novartis and Zeneca all waived patents to allow golden rice to be given away free to poor farmers. That was not the case for Bt Brinjal or Bt Cotton.

Researchers in the Philippines are optimistic that they will submit all the necessary safety information to the government as early as 2013 and many believe that the introduction of golden rice as a staple crop will follow in short order.

But in India — where the problem of Vitamin A deficiency is much larger in scale — it promises to take much longer.

India has already introduced the golden rice gene into locally grown varieties in isolated greenhouses, as mandated by law. But before it can be distributed to farmers, researchers must conduct additional trials in real-world conditions in isolated fields and satisfy additional safety regulations.

Assuming that goes well, then planners must work out a strategy for introducing the crop without damaging India's lucrative export trade in Basmati rice — since contamination of a single shipment with a few grains of GMO rice could scare off importers in the European Union, where consumer anxiety over GM food is high.

“Currently we can say we are in the product development phase,” said S.R. Rao, who in his former role as director of India's Department of Biotechnology first pushed for introducing golden rice in India.

“The future of golden rice will depend on how we address regulatory concerns, how we communicate to the public and how we generate public acceptance. That is the challenge.”

In India, opposition to GMOs has never been stronger. Despite three years of research that cleared a GM variety of eggplant as safe for cultivation and consumption, last year activists succeeded in blocking the introduction of Bt Brinjal — a pesticide-resistant strain developed by Monsanto and Maharastra-based Mahyco.

Opposition to Bt Cotton — which now accounts for more than 40 percent of the cotton grown in India — has also gathered steam as activists link corporate control over seeds to debt-related farmer suicides that have killed upwards of 5,000 farmers in the cotton-growing region of Maharashtra since 2005, though researchers have attributed the problem to various other causes as well.

As New York Times columnist David Rieff argued recently, advocates of organic farming are gaining sway over the technology-friendly agriculturalists bred by the green revolution with the ascendency of India's right to food movement.

“Because of the Bt Brinjal fiasco, there is a lot of demoralization in the scientific community,” said Rao. “While the regulatory system is working to an extent and the guidelines are getting slowly, slowly built up, at the end of the tunnel there is no light.”

For golden rice, that leaves a complex web of opposition that goes beyond health and safety concerns that GMO proponents argue have no foundation in science.

For example, initially Indian opponents of GMOs used some cocktail-napkin math to claim poor women would have to eat seven to nine kilograms of rice per day to get the benefits that golden rice advocates promised. When researchers created new varieties to deliver more betacarotene, their opponents moved the goalposts, introducing the problem of too much Vitamin A — which can reach toxic levels through supplements, but not from the body's conversion of betacarotene.

Simultaneously, critics question whether the poor people targeted by the program have the reserves of body fat needed to absorb and process a micronutrient like betacarotene into Vitamin A. Moreover, they argue that pushing a “monoculture” that would reduce the biodiversity of rice might put India at risk of an ecological disaster like the Irish potato famine — in which a potato blight killed around a million people dependent on a single staple crop for food.

“We are faced with what happened during the potato famine at any time,” said Sharma, in a characteristic example of the activist reaction to technology-based solutions. “It can happen in the case of rice. The narrower the genetic base, the greater the problems you are facing.”

That's an alarmist view. Despite decades of industrialized agriculture around the world, there has been no event similar to the potato famine since the 19th century.

However, some farmers and health workers in India and other countries have noted detrimental effects from the so-called monocultures brought about by the introduction of high-yield hybrids — particularly during India's green revolution.

In the Garwhal region of the Himalayas, for instance, activists from Beej Bachao Andolan (Seed Savers) re-introduced indigenous strains of rice after a drought decimated the green revolution's high-yield hybrids. And in the breadbasket region of Haryana and Punjab, environmental groups allege that high rates of certain cancers are the result of the massive doses of chemical fertilizers and pesticides required for green revolution crops.

That means that, at least in India, golden rice could face a long wait.

“It's still in the advanced research stage,” said Rao. “We want to determine by the end of the year whether we are ready to enter the regulatory approval phase, through field trials. So we are scheduled for a major review in the next month.”