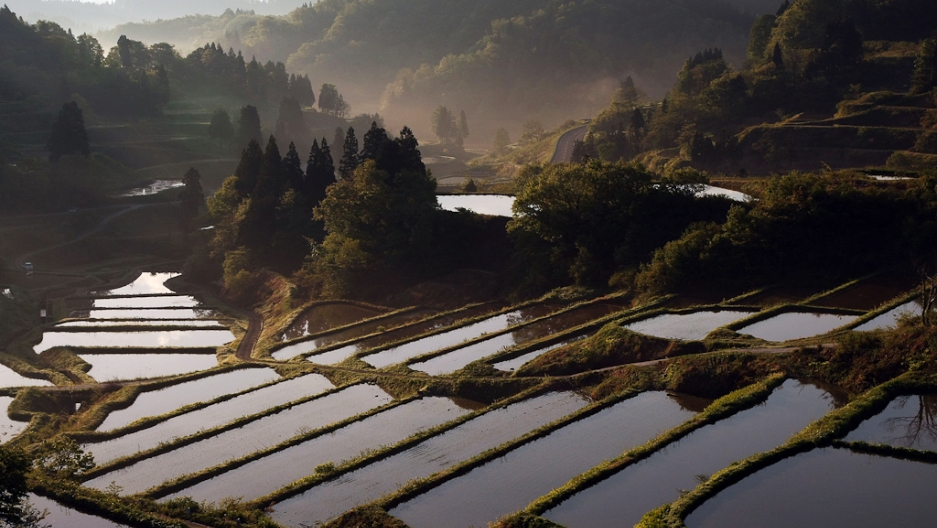 Still, ther point is rice in one place affects millions. Tainted crops in China mean two-thirds of the country's people ingest toxins everyday. In Indonesia, Suharto coaxed a people into growing rice and changed an entire culture. Rice 2.0 is GlobalPost's look at a tiny grain with a giant footprint.

TOKYO, Japan — It's impossible to overstate the importance of rice to the Japanese: the country's origins are rooted in the stuff.

The sun goddess Amaterasu, so the mythology goes, gave grains of rice to her grandson, Jimmu, before sending him off to become Japan's first emperor, 3,000 years ago.

As the annual harvest drew to a close this year in October, rice loomed large in the national consciousness for strictly temporal — and unwelcome — reasons.

Elevated levels of radiation have been found in rice grown near the Fukushima Daiichi nuclear power plant, and opposition to a Pacific free-trade deal is growing among the country's heavily subsidized rice farmers. Domestic consumption, meanwhile, is in decline as consumers make more room in their diet for bread and meat.

But there is a bigger, more insidious threat to one of the few agricultural products in which Japan is self-sufficient: global warming.

Climate change's negative effects on rice quality have been felt most on the southwest island of Kyushu since the early 1990s, but could spread as warmer climates are felt farther north in the decades to come.

Experts at Tsukuba University and the National Institute for Agro-Environmental Studies recently warned that the quality of Japanese rice would continue to decline unless changes are made in the crop's cultivation and management.

The government, they added, must encourage growers to continue developing new rice cultivars that are more resistant to high temperatures.

The Tsukuba team's statistical model predicts rice-quality response to changes in temperature. The prognosis is not good, says Masashi Okada, a graduate student at the university who led the research.

"If farmers keep the types of rice currently grown in Kyushu, then the quality will continue to decrease as the temperature rises," he told Global Post.

Japan's average annual temperature has been higher by between 0.2 degrees Centigrade and 1 degree for the past decade compared with the average base figure for the 30 years up to 2000, according to the meteorological agency.

Those rises have coincided with an increase in immature rice grains, identifiable by their milky white appearance, in newly harvested crops. "Chalky grains increase due to high temperature conditions or insufficient solar radiation during the ripening period," Okada said.

The result is a poor-quality grain containing less starch, which fetches lower prices even though, Okada concedes, the difference in taste is imperceptible to most consumers.

To counter the effects of climate change, experts have developed new grain varieties that are more resistant to rises in temperature. Several have appeared in Kyushu over the past six years, including one that was planted for the first time this spring.

The island's rice crop, however, is dominated by the traditional, trusted varieties that are bearing the brunt of scorching hot summers. It takes time for new arrivals to be accepted by conservative consumers raised on traditional, less temperature-tolerant varieties such as Hinohikari.

Some of the newly developed grains sell for less than their more established counterparts, making them an unattractive prospect for small-time farmers.

Even in these times of declining consumption, rice remains a staple of the Japanese diet and the subject of endless discussions about quality. It is usually served separately, unadulterated by soy sauce or other condiments. The Japanese word for meal and cooked rice is the same — gohan. Then there is its ineluctable role in the production of Japan's best-known alcoholic drink, sake.

TV pictures of the current emperor, Akihito, harvesting a token quantity of rice from paddies near the imperial palace is as much a part of early autumn as the turning of the leaves.

It is central to rites of the indigenous religion, Shintoism, and is a staple of New Year and other big celebrations. Take a train journey in just about any part of Japan in summer, and you will be treated to the bucolic idyll of paddies brimming with bright-green plants, heavy with grain.

Although demand for rice rose for the first time in three years in the 12 months through to June, government officials attributed the jump to people stocking up after the March 11 earthquake and tsunami.

The long-term trend is one of decline, as many younger Japanese look to other products for their carbohydrate fix. In 2008 per capita rice consumption stood at 59 kg, down by almost half from its peak in 1962.

Given those consumer trends, Masayoshi Honma, a professor in the graduate school of agricultural and life sciences at Tokyo University, cautions against panic over climate change-led damage to crops.

He believes production will simply shift farther north, as Kyushu and other southern climes warm up. "We are creating new varieties that can be grown farther north, so I am not too worried about global warming," Honma told Global Post.

"In Hokkaido [Japan's northernmost island], for example, it used to be very difficult to produce good quality rice, but now there are very good varieties available. It's popular and relatively low in cost."

Farmers in areas that are already feeling the effects of global warming will simply switch to other crops, a trend that is already well under way, Honma says. "Japan is suffering from over-production of rice, because consumption is reducing. So if climate change results in lower production, it won't really matter."

In the end, the success, or otherwise, of climate change-resistant rice varieties, will rest on the consumers' eventual verdict.

"The price depends on the quality," Okada said. "If the new rice is of a good enough quality, then its price will rise. And that can only be good for growers."