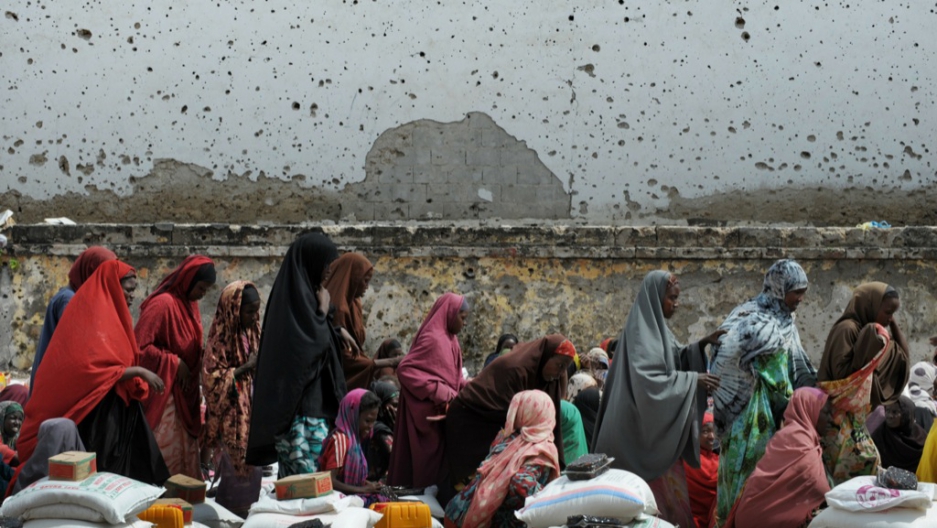 Somali women walk past sacks of rice, flour and sugar donated to them and other Internally Displaced Persons (IDP) by a Kuwaiti based Islamic charity in Somalia's capital Mogadishu on August 14, 2011.
Credit: Roberto Schmidt
Share

NAIROBI, Kenya — It has triggered riots and coups, it is reviled and loved, it is sometimes a symbol of wealth and sometimes the food of the poor, it is grown on hillsides and valley floors, but like anywhere in the world, rice is hard to get away from.

Although rice is more often associated with Asia, its history in Africa is just as long, with rice grown here for more than 3,000 years according to the Africa Rice Center (AfricaRice), the continent’s leading research and development organization.

According to International Rice Research Institute (IRRI) data, well over 10 million hectares of land are cultivated for rice in Africa, producing more than 24 million tons — but this still isn't enough to keep up with demand.

AfricaRice was established 40 years ago and now has 24 member countries. It is headquartered in the West African city of Cotonou, Benin. AfricaRice seeks to expand the cultivation and consumption of rice in Sub-Saharan Africa in order to help improve food security and alleviate poverty for mostly small-scale farmers.

Demand for rice is increasing by 6 percent per annum in West and Central Africa, which is the continent’s “rice belt,” but Africa’s own supply is falling ever shorter forcing consumers to buy expensive imported rice.

“Rice has long been the food staple in many traditional rice-growing communities and in major cities in West Africa. It has now become the fastest growing food staple across the continent,” said a recent AfricaRice report.

“Since the early 1970s rice is the No. 1 source of calories intake in West Africa and comes third after maize and cassava for the continent as whole,” the report stated.

In 2009, Africa imported more than 10 million tons of rice, roughly one-third of the rice available on the world market, at a cost of $4 billion. The previous year the dangers of Africa’s reliance on rice imports was made clear when rocketing world food prices led to riots in capital cities across the continent.

West Africa, where rice is a staple, was worst hit with occasionally deadly riots in Burkina Faso, Cameroon, Ivory Coast and Senegal. West African governments are particularly wary of fluctuations in the price and availability of rice, because they remember 1979 when rice riots contributed to political instability that preceded years of civil war that did not end until 2003.

In an ill-considered attempt to encourage domestic rice production, Liberia's President William Tolbert increased the price of imported rice by 50 percent sparking popular demonstrations in the capital Monrovia. The army moved in to put down the protests by opening fire on the crowds and killing dozens of people.

Unrest and dissatisfaction with Tolbert’s regime continued and spread until the following April when Sergeant Samuel Doe snuck into the Executive Mansion with 16 other dissident soldiers and killed the president in his bed, thus ending the old order and kicking-off decades of brutality and civil war.

Oryza glaberrima — or African rice — is still grown in some parts of West Africa although for the most part Oryza sativa — Asian rice — has largely taken over.

Africa’s rice revolution began in the mid-1990s with New Rice for Africa (NERICA), a drought-resistant, fast-growing, hardy and high-yielding hybrid rice that promises to revolutionize rice cultivation on the continent by making it possible to grow rice in uplands rather than just paddy fields.

Dubbed a “miracle crop,” NERICA was specially developed for use by poor smallholder farmers who can afford neither thirsty irrigation systems nor expensive fertilizers and pesticides by scientists combining the toughness of African rice with Asian rice’s high-yielding qualities.

The result was 50 percent higher yields (even without fertilizer), a shorter growth time of only 30-50 days, a genetically inbuilt resistance to local diseases and climatic conditions and a 2 percent higher protein content.