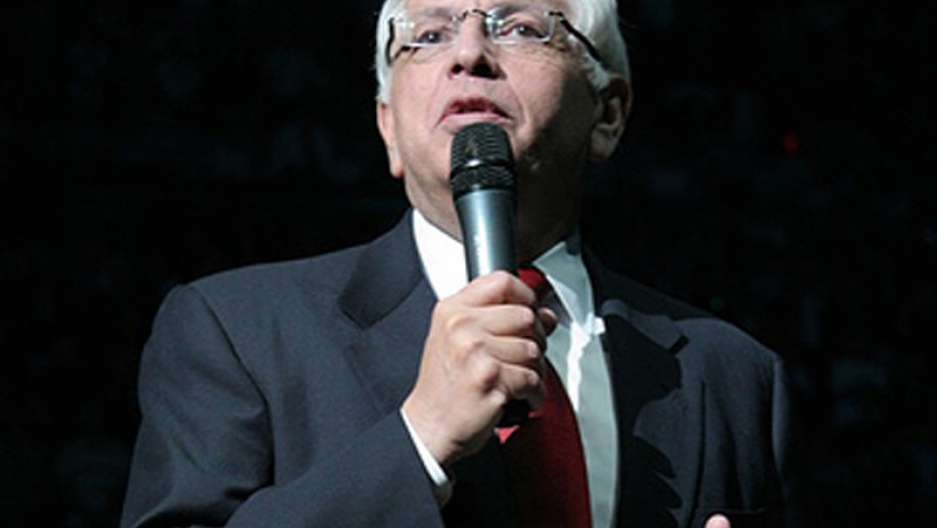 NBA President David Sten and the league's players announced that they had reached a tentative deal to end the 149 day lockout. (Photo by Cody Mulcahy, via Wikimedia Commons, cc-by-sa.)

After 149 days, the NBA lockout ended over the Thanksgiving weekend.

The owners and the players reached a deal on a new labor agreement that saw the players give back millions of dollars to the owners, who say the league and their teams have been losing money for years.

"They say they want to get back to playing for the fans," said Ibrhaim Abdul-Matin, The Takeaway's sports correspondent.

But the deal is not yet finalized, in fact it's yet to be approved by a majority of the more than 430 players.

Many players, however, told ESPN Los Angeles that they didn't think that would be a problem.

"I think for them to bring it to a vote, they definitely met some things we were asking for," Los Angeles Lakers forward Matt Barnes said to ESPN LA. "For us to even to come to a vote, because last time we weren't even close to having a vote. For us to come to a vote, it's close to as good as it's gonna get. So let's just go out there and play."

According to the Washington Post, other hurdles remaining include approval by a majority of the league's 29 owners, dismissal of the anti-trust lawsuit by the players and then the reforming of the players' union. There are a few minor details of the agreement that also remain outstanding.

Abdul-Matin said the conventional wisdom is that a shorter schedule favors veteran teams that might not be able to hold up over the longer NBA schedule, as well as because they don't have as many players learning how the game is played the NBA level. That said, in order to get in as many games as possible, 66, the teams will often play on back-to-back nights.

The remaining question is will the NBA suffer from the depressed attendance and barely simmering anger that plagued it for years after its last work-stoppage and that hit baseball after its strike in the early 1990s. For his part, Abdul-Matin doesn't think that will happen.

"There's a sort of cacophony of voices (saying) 'Yes, we can get back to watching basketball,' " he said.