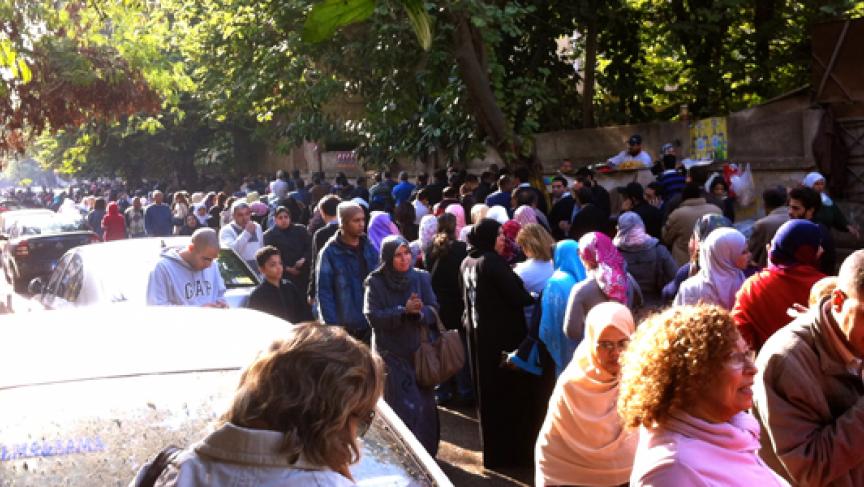 A line of more than 1,200 women lined up in Ma'adi, a suburb of Cairo, to vote on Monday. (Photo by Matthew Bell.)

Egyptians lined up and voted on Monday.

Despite a stormy run-up to the vote, the turnout was high and the atmosphere calm. These are the first free elections in Egypt since the toppling of President Hosni Mubarak. His regime buckled after massive protests demanding his ouster.

Last week, the protesters were back in Cairo’s Tahrir Square to demand that Egypt’s generals also step aside. Deadly clashes followed.

But on Monday, it was the casting of ballots that made headlines.

Just after 8 a.m., in the well-to-do Cairo suburb of Ma’adi, more than 250 men waited to cast their votes inside a middle school. A handful of Egyptian soldiers stood guard, wearing green camouflage, with AK-47s in hand. The site was crowded, but calm. People seemed excited about voting day, including school teacher Ibrahim Youssef.

“This is an historic day,” he said. “The elections process will allow a civilian government to take over from the military. And Egypt can finally claim its rightful place in the world.”

But that will take a while. Egypt’s new voting system is complicated and drawn out. It’s taking place on a staggered schedule in different parts of the country. The plan is to have both houses of Parliament in place by March. But voters here were still encouraged.

Khaled Fowzi, a 32 year-old businessman, said what’s going on here is very different from election days during the Mubarak era.

“Each candidate has his own team who hands out fliers. Usually these people are very violent with each other, they’re armed, they have knives and so on," he said. "But this morning, I saw them, they were organizing each other in a very civil way, discussing ‘you take this side of the street, we’ll take this side.’ I think this is a very positive sign as well.”

While the relative calm was a good sign, handing out fliers near polling stations is technically a violation of the ban on last-minute campaigning. In other instances, cars blasted political messages from loudspeakers. Some polling sites opened up late this morning. Many of them demanded real patience.

In another part of the Ma’adi suburb, for example, more than 1,200 women cued up in a separate line at a high school for girls. It was a mixed crowd of upper and middle class women, some more conservatively dressed than others. One of them, who gave her name as Noor, wore a full black veil that showed only her eyes.

But she said religion wasn’t the top issue for her as a voter.

“The most important thing,” she said, “is for Egyptians to be able to live together in peace and be free.” She added, “it doesn’t matter if a candidate is an Islamist or not. What Egypt really needs is better education.”

Men lined up at another polling site in the working class Cairo neighborhood of Shubra. Volunteers from the Muslim Brotherhood were there with a laptop helping voters make sure they were at the correct precinct.

Yasser Bahaa was a bit frustrated that the site opened more than two hours late and that some would-be voters went home.

“Our goal for today is that everybody here vote,” he said. “I mean, even if the time finishes, then we should put all the people standing outside inside the school, close the door and keep them even until midnight, until they finish.”

That message goes against the calls from activists in Tahrir Square. Many of them say this election is illegitimate because it’s being run by the Supreme Council of the Armed Forces – in fact by the exact same group who engineered last year’s fraud-ridden voting under Mubarak.

Demonstrators want the military to immediately hand over power to a civilian government. The square is still occupied but numbers dropped today. Staunch supporters of the protests, like Egyptian journalist Ibrahim Eissa, said they can’t stop now.

“I think there can be no half-revolution,” he said. “It should be completed. The military council is part of the old regime. The aim of the revolution is to get rid of this regime from the roots and to re-build.”

But the Egyptians who turned out at the polls today seemed to think that the best way to start rebuilding is to take part in the elections and to go from there.