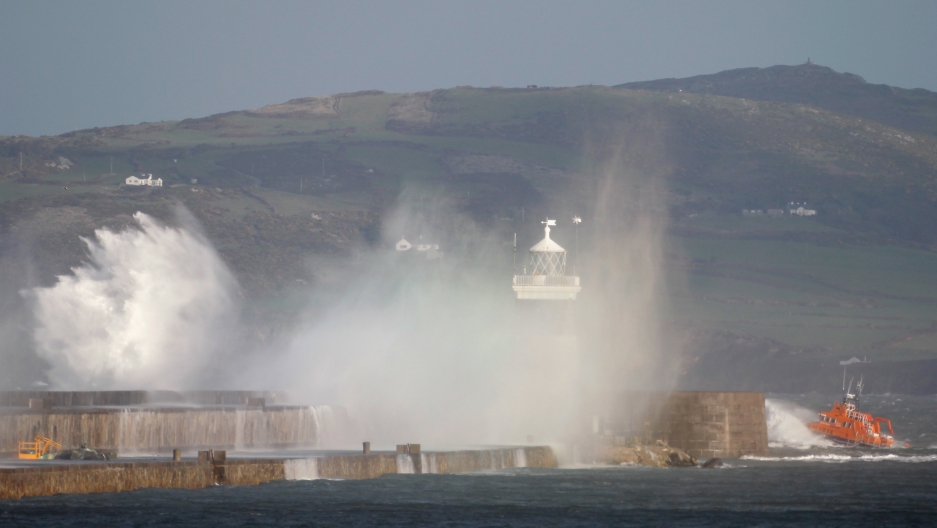 A lifeboat passes the harbour wall as the search continues for the crew of cargo vessel The Swanland which sank off north Wales on November 27, 2011 in Holyhead, Wales. Five crew are still missing aafter the recovery of one body today. Prince William is a search and rescue helicopter co-pilot at nearby RAF Valley andtook part in the rescue last night which saved two crewman.
Credit: Christopher Furlong
Share

Five crew members are still missing and some fear may be dead after a Russian-crewed cargo ship sank in the Irish Sea off the coast of Wales, Reuters reported. One man was found dead and another two men were found in a rescue mission co-piloted by Prince William.

The cargo ship, the Swanland, carrying 3,000 tons of limestone, sank 10 miles west of the Llyn peninsula on Saturday after reporting that its hull was cracking in the bad weather and taking on water, Reuters reported. The ship sank overnight, mainly due to gale force weather, according to a distress call made at 2 am, the Guardian reported.

Two men were rescued by a RAF Sea King helicopter that Prince William co-piloted and were taken to a hospital in Bangor, the Guardian reported.

"It was a four-man crew – captain, co-pilot, radar operator and winchman – and he was the co-pilot,” a Ministry of Defense spokesman said of Prince William said, the Guardian reported. “The weather conditions were described as extremely bad, with poor visibility and strong winds.”

When the lifeboats and helicopters arrived at the scene only some debris from the ship and two lifeboats with two sailors clinging to them were left, the Daily Telegraph reported.

“I think they are OK and are just suffering from shock,” said Ray Carson, watch manager of the Holyhead Coast guard, the Daily Telegraph reported. “In broken English and through drawing a diagram, the second officer told us the ship was hit by an enormous wave. It rolled the ship and it broke its back. He said this led to a catastrophic failure of the vessel.”

Rescue teams, which also included the Irish Republic, later found the body of one sailor and still looked for the remaining five. Soon after another lifeboat was found but appeared empty, although rescue teams couldn’t make their way to it due to treacherous conditions, the Daily Telegraph reported.