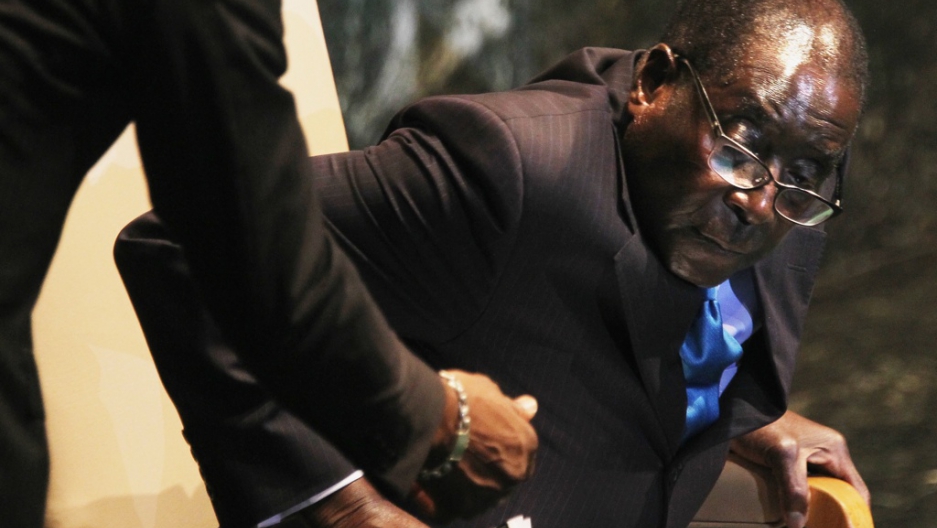 HARARE, Zimbabwe — On his eighth visit to Singapore this year — and those are just the ones we know about — it is inevitable that speculation should swirl around the topic of President Robert Mugabe’s health.

At 87, he now depends upon Malaysian and Singaporean specialists for treatment despite the fact that first-class surgeons are available in Zimbabwe.

Mugabe’s staff insist that his visits to the Far East are private — he has a daughter at university in Hong Kong – but it is clear that what ails him is more serious than his spin-doctors claim. The official diagnosis is glaucoma. But recent pictures show his aides standing close-by in anticipation of a fall.

Fuelling speculation have been WikiLeaks cables which tell of Zanu-PF luminaries lining up to inform US embassy officials that their leader is on his last legs.

“They refer to a prostate condition that varies in its seriousness according to who is telling the story,” a former official related.

These disclosures must be galling for a president who wants to manage his own departure from office — and indeed beyond.

Adding to his sense of impermanence must be the steady erosion of ideological underpinnings as his contemporaries exit the world stage one by one.

First to go was Romania’s Nicolae Ceausescu who, like Mugabe, rejected attempts by the Soviet Union to exercise tutelage. Both leaders remained firmly attached to their Chinese allies. When Ceausescu was executed in 1989, Mugabe lost a soul-mate. At the same time the fall of the Berlin Wall which saw other Communist regimes collapse deprived Mugabe of the Marxist-Leninist support structures he had taken for granted.

The release of Nelson Mandela in 1990 was also a worrying development for Mugabe’s regional authority as it challenged his narrow nationalist and exclusivist paradigm and replaced it with a constitutional order that was diametrically opposed.

Mugabe bitterly resented Mandela’s criticism of Zimbabwe’s intervention in the Democratic Republic of Congo in 1998. And more recently he has proved uncomfortable with French intervention in the Ivory Coast which upheld the election victory of Alassane Ouattara and forced Laurent Gbagbo to leave office.

In February this year, Mugabe lost another friend when Egypt’s long-time ruler Hosni Mubarak was deposed. The two men, roughly the same age and with the same time in office, had much in common as they hung on to power in the teeth of popular resistance.

Air Zimbabwe planes carrying the Mugabes to Europe and the Far East were regularly diverted to Cairo so the veteran rulers could compare notes.

The overthrow of Mubarak led in turn to Col. Muammar Gaddafi’s grisly end. His flight from Sirte, capture and execution has prompted comparisons with Mugabe’s possible fate. But such a scenario can be misleading.

Mugabe runs a tight ship but nothing like the vicious regime presided over by Libya’s ruler. He is called “Bob” by his white compatriots — not to his face, of course — and doesn’t seem to mind. Despite police crackdowns on civic protest, middle-class Zimbabweans carry on with their lives, eating out at sidewalk cafes, going to the movies and playing cricket on neatly watered pitches.

Zimbabwe was readmitted to Test status recently, a small sign of normality.

Everywhere across the capital, Harare, are the bright purple canopies of jacaranda trees. Next month the red flamboyants bloom as the rain arrives — invariably on time.

But the shadow of repression cannot be ignored. The Libyan ambassador to Harare was booted out when he changed sides. Radio and television are tightly and crudely controlled to reflect the views of Mugabe’s regime. Gaddafi is portrayed on the state media as a nationalist hero who went astray toward the end.

Gangs of Mugabe’s supporters break up the opposition Movement for Democratic Change gatherings while the police look on. The Archbishop of Canterbury, Rowan Williams, on a visit last month presented Mugabe with a dossier of human rights violations against Anglican members whose schools and churches have been occupied by a Mugabe-backed faction — again with police complicity.

Hundreds of supporters of Zimbabwe's opposition have been killed during election campaigns. Thousands more have been tortured. The murders have been carried out with impunity by Mugabe's militias or by state agents.

Gaddafi was a generous patron of Mugabe’s Zanu-PF regime but was never taken seriously in his Gilbert & Sullivan uniforms accompanied by large female Nubian bodyguards. Even in official circles Zimbabweans resented Gaddafi’s pretensions and the implication that they had been bought.

Gaddafi splashed Libya’s oil money around generously. But as South Africa’s Archbishop Desmond Tutu pointed out, “Gaddafi had this wonderful dream of a United States of Africa, but I think we are going to remember what happened in the latter days of his rule when he actually bombed his own people.”