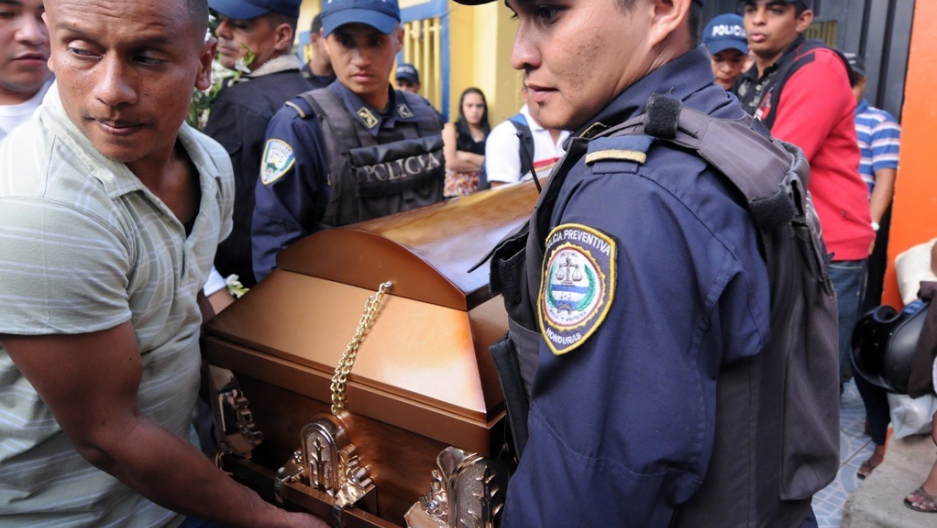 TEGUCIGALPA, Honduras — To be fair, this country is a tough place for a lawman.

Starting police pay is about $250 a month, and job duties include battling criminals armed with automatic weapons and limitless drug cash. Deep departmental corruption and disorder chock the wheels of justice even when the bad guys get caught.

But at a time when Honduras urgently needs a functional law enforcement presence capable of lowering the country’s staggering homicide rate — the highest in the world in 2010, according to a new UN report — its police force has hit a low point.

It’s not a question of bribe-taking or petty corruption, which are accepted as supplemental income for police in this part of the world. But in recent months, as transnational drug trafficking organizations push deeper into the country to secure new cocaine routes through Central America, Honduran police seem to be making matters worse.

In a case that has become emblematic of the security crisis in Honduras, the 22-year-old son of the president of the national university was murdered last month along with a friend after a late-night traffic stop by police here in the capital.

Forensic evidence gathered by the university’s own investigators pointed to four young officers, who were later taken into custody. But within days, the suspects were released.

A national outcry followed and the officers were ordered rearrested, but they had already fled, forcing the police to offer reward money for their recapture just days after releasing them. Several of the country’s top police commanders were fired as the scandal widened.

“The problem isn’t that the (police) are overwhelmed by crime. The problem is that they’re working with the criminals,” said Julieta Castellanos, the university president whose son, Rafael Alejandro, was allegedly shot at close range in the family car while returning home from a birthday party. A friend, Carlos David Pineda, was riding in the passenger seat, and Castellanos said he was driven to the outskirts of the city and executed an hour and a half later.

Honduras recorded 82.1 killings per 100,000 residents in 2010, making it the most violent country in the world, followed by El Salvador, with 66 killings per 100,000.
In the 2011 United Nations’ Global Study on Homicide released last month, Central America stands out as the most deadly region anywhere on the planet.

Police officials and security experts blame the soaring murder rate on the drug trade, as Mexican cartels look to evade tougher enforcement further north by using Central America as a primary artery for moving cocaine. But thousands of ordinary Hondurans have been killed in recent years who appear to have nothing to do with the narcotics smuggling.

Castellanos said she did not know why her son was killed, but said that kidnappings and extortion schemes targeting motorists had become common in the middle-class neighborhood where the young men were driving that night. She said she believed higher-ranking police officials were involved, and that investigators in the case were the targets of an intimidation campaign.

“They have been threatened. Their cars have been followed,” said Castellanos, a sociologist who formerly directed the country’s leading data-gathering center for violence and homicide, her own son now a statistic.

Police officials acknowledged the case has further diminished already-poor public perceptions of their officers at a particularly sensitive time. “Mistakes were made, and now we’re taking steps to correct them,” said police commander Antonio Somoza in an interview here, vowing to re-capture the officers suspected in the killing.

While it is widely accepted here among victims of crime and their families that Honduras’ legal system is stacked against the poor, the murder of Castellanos’ son has stunned many who say it shows not even the country’s elite are not spared from the cycle of murder and immunity.

In another recent case, a popular community leader in the tough Ciudad Planeta neighborhood outside the northern city of La Lima was taken into police custody in late August, never to be seen again.

“The worst thing is not knowing whether if he’s alive or dead,” said Marta Cruz, whose brother, Jose Reinaldo Cruz, had been threatened for complaining of police abuses against residents in his neighborhood. “We don’t know if he’s cold, or hungry, or sick,” she said.

Cruz’s neighborhood is a stronghold of the feared 18th Street gang, and police accused her brother of working for the criminals because he lived within their territory. “If he were a gang leader, why did he die poor?” his sister asked, saying the family was four months behind on mortgage payments and at risk of losing their home.

The US has spent at least $50 million on security aid to Honduras in recent years, with programs to train police investigators, prosecutors, prison guards and others. But many here say that corruption and institutional dysfunction has only grown worse since the 2009 coup that toppled leftist president Jose Manuel Zelaya, as that the forces of organized crime burrow deeper into the government and security forces.

“If people see crime in their communities but they don’t report it because they don’t trust the police, then where are we?” said a US official working here, who could not be identified due to security protocols. “The public trust has been broken repeatedly.”

Honduran security forces have made important gains, US diplomats note, including the largest seizure of assets in the country’s history in an Oct. 24 multi-agency raid that confiscated in $24 million in cash and property from criminal suspects.

But that operation was soon obscured by a fresh embarrassment, when Honduran officials revealed Oct. 31 that 300 assault rifles, 300,000 rounds of ammunition and other weapons had been stolen from the armory of an elite police unit in 2009, only to be kept quiet until now.

With support from the Pulitzer Center on Crisis Reporting.