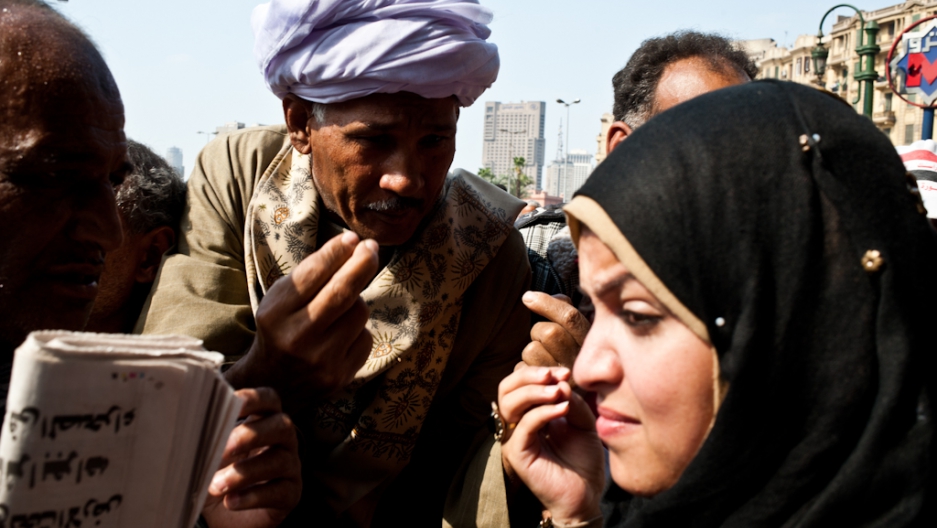 A woman argues with a group of men in Tahrir Square in October 2011.
Credit: Ben Brody
Share

A French journalist said she was sexually assaulted Thursday in Cairo's Tahrir Square, in the second such attack reported in a single day.

She and her crew were filming in Mohamed Mahmoud Street when they were jumped on by boys aged around 14 or 15, she said. The group dragged them toward Tahrir Square and she became separated from her cameraman.

"We were then attacked by a crowd of men. I was assaulted by a gang of boys and men who tore off my clothes."

The crowd molested her in a way that "would be considered rape," Sinz told Agence France Presse.

"A few people tried to help me but didn't succeed. I was lynched. It was about three-quarters of an hour before they got me out. I thought I was going to die."

Sinz was eventually rescued by some Egyptians and taken back to her hotel. Her cameraman, Salah Agrabi, was also attacked, she said.

The scene was captured by Egyptian TV, in a clip shown by Le Nouvel Observateur magazine:

Sinz's account came shortly after Egyptian-American commentator Mona Eltahawy described what she called the "worst sexual assault ever" at the hands of Egypt's Central Security Forces.

The reports have prompted press freedom group Reporters Without Borders to issue a safety warning to journalists covering the events in Tahrir Square:

"It is more dangerous for a woman than a man to cover the demonstrations in Tahrir Square. That is the reality and the media must face it. It is the first time that there have been repeated sexual assaults against women reporters in the same place. The media must keep this in mind when sending staff there and must take special safety measures.

"We are not saying the international media should pull out and stop covering events in Egypt. But they need to adapt to the threats that currently exist."

The group initially urged media organisations to stop sending female journalists to Egypt, but changed its advice after a storm of complaints from reporters, the Guardian said.