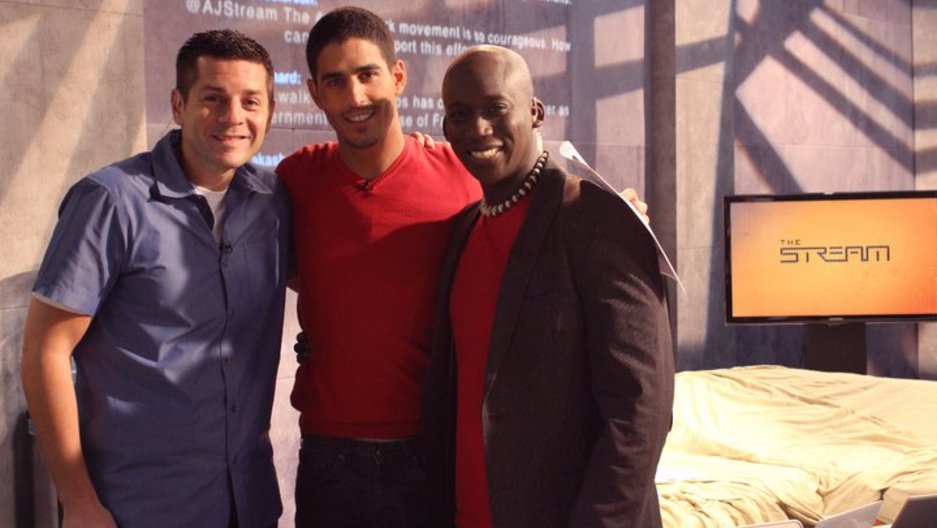 Derrick Ashong, right, one of the hosts of "The Stream" takes a photo with members of the crew from their first show, earlier this year. (Photo courtesy of The Stream, via Facebook.)

It's hard to find Al-Jazeera English on American TV systems.

But on the web, the network is a burgeoning news competitor. So what did the network do? They created a social media show that has a TV component.

The Stream is a self-described “social media community with its own daily TV program.” It has a number of hosts, including American Derrick Ashong, an orange couch, and producers with lap tops on air bringing up Twitter feeds, Facebook, Skype and YouTube. They cover everything from the death of Moammar Gadhafi to a debate in Australia over a possible carbon tax.

"In a nutshell, we source our content from the social media space and we curate it to determine what we think our audience wants to hear, what they say they want to hear and what we think they ought to know," Ashong said.

The show has been in the public realm for less than a year, and it burst onto the scene in a big way. Their first show was the day after President Barack Obama announced the capture of Osama Bin Laden.

The Stream hooked up with a man (@reallyvirtual) who'd "live-tweeted" the raid, unknowingly, and interviewed him.

"It was Monday, it was our first day on air. We got ahold of him and had him on live via Skype before any other international network," Ashong said.

Ashong said the show producers and hosts often get questions about how they can be sure the information they're presenting is accurate. Sometimes, they'll point to specific examples of social media gone wrong, like when NPR tweeted that U.S. Rep. Gabrielle Giffords had been killed, when in fact she was only gravely wounded.

Ashong said that's an issue journalists always face, verifying information and making sure it's accurate. He said it's always important, but not in a way that is any more or less important than other kinds of reporting.

He said they have strategies that help them do that.

"You actually look to the community, because the community tends to be self-vetting," Ashong said. "We don't think that just because something is being said on social media, we have to get to it first. We take our time and vet it, check, cross-check reference and contact the people who are seeing it, then we present it."

Ashong said they're able to take their time because, often, they're reporting stories days and weeks before more main stream media outlets would be interested in the story.