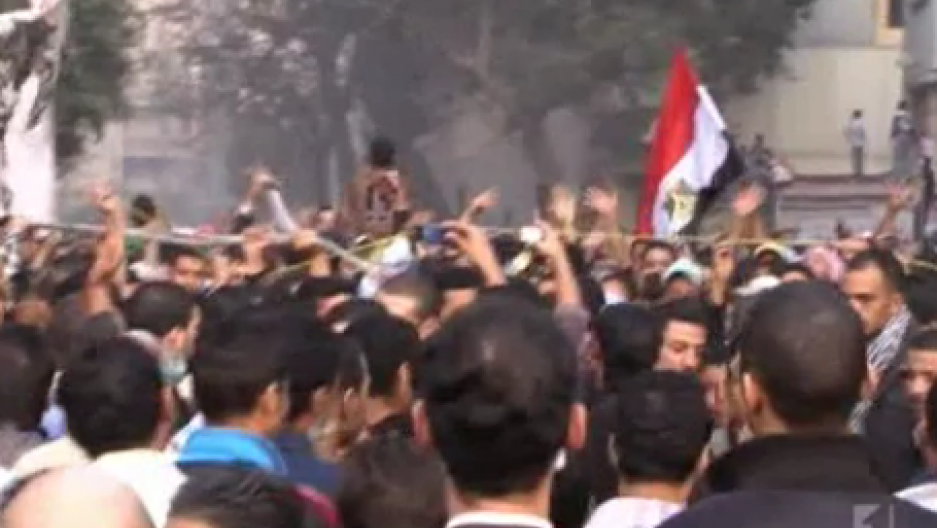 Protests in Tahrir Square have Egypt in turmoil at this hour. This if the fifth day of protests there. (Photo from ABCau video.)

An Egyptian court on Thursday ordered that three Americans students detained in Cairo during the Tahrir Square riots be released, the Associated Press reported.

There was no word immediately, however, on when Derrik Sweeney, Gregory Porter, Luke Gates, U.S. students studying at the American University in Cairo, would actually be released from custody, however.

But, as that decision was being announced, two other Americans, including dual-citizen journalist Mona Eltahawy and Jehane Noujaim, a documentary filmmaker, were both detained by Egyptian authorities.

Elthaway tweeted a chilling recounting of the violence and threats Egyptian police inflicted on he while she was in custody.

"I can barely imagine what my family and loved ones were going through those 12 hours-I know they were worried about me to begin with. Sorry" she tweeted.

Elthaway said in the 12 hours she was held, she beaten by authorities to the extent that both of her arms were broken. She said she was sexually assaulted as well.

"5 or 6 surrounded me, groped and prodded my breasts, grabbed my genital area and I lost count how many hands tried to get into my trousers." she wrote.

Elthaway said she was rescused from the Egyptian police who sexually assaulted her by soldiers from Egypt's Military Intelligence. However, while they didn't beat her, they did blindfold her and interrogate her four hours.

"Another hour later I was free with apology from military intelligence for what CSF did. Took pics of my bruises and recorded statement On sexual assault and said would investigate it and said they had no idea why I was there. Then who does??! WTF!" she wrote.

Nourgiam, however, has not yet been released. According to her producer, she was taken into custody on Wednesday and her camera was seized. Her friends have taken to Twitter to agitate for her release.

According to the U.S. Embassy in Cairo, the State Department has been engaging with Egyptian authorities to try and gain Noujaim's release.

Check back later for updates.