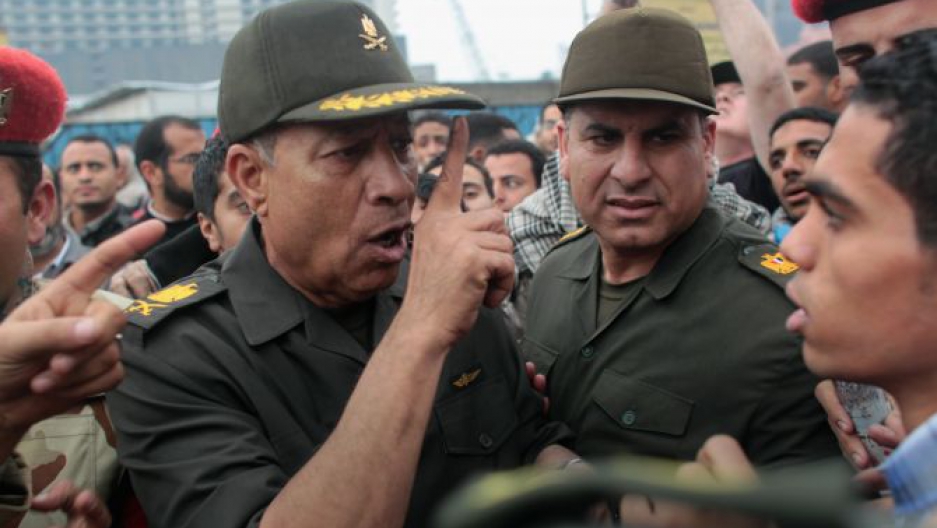 An Egyptian army general lectures anti-government demonstrators while touring Tahrir Square on February 5, 2011 in Cairo, Egypt. The army had been widely viewed as an ally of the revolution but that perception quickly faded once the army took power.
Credit: John Moore
Share

CAIRO — Through three decades of iron-fisted rule, Hosni Mubarak suspended the rights of 2,000 civilians and ordered them to face military tribunals in a campaign to crush the Islamist opposition that threatened his rule.

The military courts, which were empowered by Egypt’s so-called Emergency Law, were seen as a violation of the Egyptian constitution and of international law and their use ignited a firestorm of criticism by human rights activists around the world.

Now in the aftermath of demonstrations against such human rights abuses that led to the toppling of Mubarak in February, Egypt’s ruling military council has hauled 12,000 civilians before similar military tribunals — six times the number under Mubarak in just 10 months, according to a report by Egypt’s leading human rights organization.

So it’s understandable that human rights activists in Egypt and abroad are asking what has really changed, and whether the ‘January 25 Revolution’ has ushered in a military coup that is far surpassing the Mubarak regime’s erosion of civil rights. On the eve of the November 28 election, a mounting anger directed against the military has triggered more protests and more violent crackdowns in and around Tahrir Square.

And the role of the military in a new Egypt is now perhaps the central question in the upcoming series of parliamentary elections and the process of adopting a new constitution.

“We thought it was a transitional period and the change is happening. We found out that the transition hasn’t even begun,” said Hossam Bahgat, director of the Egyptian Initiative for Personal Rights, which led independent investigations into violations committed by the military and police.

A leading presidential candidate Ayman Nour found that out the hard way. After a conviction on trumped-up charges related to signatures on petitions for his party which challenged Mubarak in the 2005 election, Nour lost his appeal on October 16. Now calling for a more independent judiciary, Nour has vowed to continue his political career even though a prison sentence hangs over his head.

“The use of military trials and emergency law is a threat to the fairness and transparency of the upcoming elections and unfortunately the military is using the same Mubarak policies we revolted against,” said Nour.

And throughout the nine months since Mubarak was toppled, the arrests of civilian protesters who are forced to face military tribunals is continuing at an aggressive pace.   One political activist was arrested by military police on October 18 for taking part in the Black Circle Campaign sponsored by April 6 Youth Movement to highlight members of Mubarak’s National Democratic Party who are still running for the upcoming elections.

Mubarak’s military trials were used to crush an Islamist opposition and were only heard in cases of terrorism. Judgement was swift, there was no real process for appeal and sentences ranged between lengthy jail terms and death sentences.

SCAF has now broadened the use of military trials, putting civilians in front of the tribunals for unlawful gathering and a long list of charges like weapons possession, violating military facilities and attacking military personnel. Sentences are shorter,but affect many more civilians and their families.

General Hassan el Rowini, Commander of the Central Military and member of the Supreme Council of the Armed Forces indicated in June 2011 that military prosecutions are justified “because Egypt is ruled by the military, it is a military jurisdiction.”

After months of pressure by human rights activists and organization, the military softened its tone, but activists say its actions remain largely unchanged.

“Now they only apply military laws in cases of violations against the military, such as protesting in front of the military court or prison,” said Ragia Omran, lawyer and top officer of the “No Military Trials” movement, which produced the finding that more than 12,000 civilians have been brought before military tribunals since February 11 when the Supreme Council of the Armed Forces (SCAF) took power. “In other words, they are applying military laws on protesters and opinion holders.”

“Yes they are accepting appeals and less people are standing military trials,” she added. “But it remains a great violation to civil and human rights, even if it’s used against criminals.”

Despite the military’s decreasing use of military law to prosecute civilians, around 9,000 people remain in different prisons across Egypt serving military terms they were handed in the months following the revolution.

Members of “No Military Trials,” reported that hundreds of protesters were charged with violating military forces that were dispersing protests. They faced speedy trials which human rights activists say denied them due process and they received sentences of between 3 to 5 years in jail.

Abul Maati Ahmed, a 21-year-old martial arts champion was protesting with the rest of his family on Tahrir Square starting January 25. On February 3, he was arrested coming into the square and taken to the nearby Egyptian Museum, which was used by the security forces as a processing center for those arrested.

“We filed to the Military Prosecutor and we were informed on February 18 that he was sentenced to 5 years for assaulting the military,” said Abu Arab, the father.

Ahmed Abu Arab visited his son for the first time on February 20. At that time, the father learned that his son didn’t even know that he had been sentenced.

“He told us that he was never taken to court, he never saw a judge, he was shocked when we told him that he was sentenced to 5 years,” said Abu Arab.
Activists against military trials condemned the military prosecutors for the lack of proper and thorough investigations into the cases.

“Some of the trials took three days in total, from arrest and sentence, it is absolutely illegitimate,” said Omran of the “No Military Trials” movement.
Despite accepting some appeals, Omran points out that compensating those who are acquitted in their retrial was never a subject of discussion.

“They arrested my son and tortured him, they destroyed his life by their injustice. He is now a smoker in jail instead of a Kung Fu champion,” said Abu Arab.

“We called for a civil state during the ‘January 25 Revolution,’ said Omran. “And if we accept military trials we might as well accept the military in power for long years.”