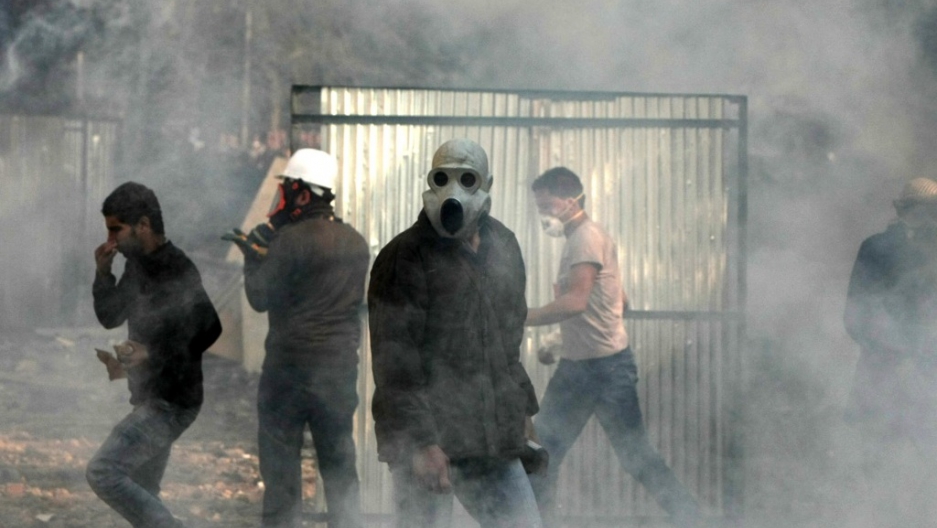 Egyptian protesters wear masks for protection against tear gas during clashes with riot police along a road which leads to the Interior Ministry, near Tahrir Square, in Cairo on November 23, 2011.
Credit: Mahmud Hams
Share


Health workers volunteering at bloody protests in Cairo’s Tahrir Square have come under fire from security forces for treating wounded anti-government demonstrators, facing injury, arrest and, in at least one confirmed case, death, in the five days of clashes.

Doctors, nurses, medical students, pharmacists and other health professionals poured into Tahrir Square, the focal point of Egypt’s uprising in February, to assist the battered and bruised on both sides, after activists calling for an end to military rule began battling riot police on a nearby street on Nov. 19.

They have been on the front lines ever since, fashioning seven make-shift field clinics, retrieving the wounded, performing basic surgery and administering medicine amid chaotic scenes.

Volunteers even established a corridor from the battlefront to an improvised hospital at a mosque just outside the square, to allow the free movement of ambulances and motorcycles ferrying out the casualties.

But the medics’ readiness to treat the protestors — whom the government dubs as thugs and foreign agents bent on sowing unrest ahead of elections next week — has also put the medical workers in the crosshairs of Egyptian security forces.

“Security forces are not respecting their [doctors’] neutrality. Not at all,” says Amani Massoud, a public health expert and researcher with the Egyptian Initiative for Personal Rights (EIPR), a Cairo-based rights group. Massoud is currently collecting testimonies on direct attacks on health workers and field hospitals in and around Tahrir.

Attempts by GlobalPost to seek comment on the matter from the Egyptian government were unsuccessful.

On Thursday, the Egyptian military brokered a cease-fire between protestors and police, and erected a high, concrete wall on the frontline to separate the two sides. But thousands, including the injured, remained in the square.

At least 38 protestors, in Cairo and in smaller demonstrations elsewhere in the country, were killed, and nearly 3,000 wounded by rubber bullets, tear gas, and live ammunition, health officials and demonstrators said.

The unrest was sparked when police charged a peaceful sit-in against the country’s ruling military council on Saturday.

Egypt’s army, led by the Supreme Council of Armed Forces (SCAF), seized control of the country during an 18-day uprising against autocratic leader, Hosni Mubarak, earlier this year.

“We have accounts of tear gas canisters falling directly in the field hospitals, even when they are not close to the clashes,” Massoud says. “When the army went in [to the square] on Sunday, they chased after doctors and seized medical supplies. It is very evident that security forces have made many attempts to prevent doctors from carrying on with their duties.”

Massoud said there is no estimate on how many medical volunteers are in the field, nor on the number wounded.

But YouTube videos posted by workers and protestors appear to show medical personnel writhing in pain from police-induced injuries, and medics interviewed in Tahrir spoke of the ill effects of tear gas inhalation and threats.

On Tuesday, security forces allegedly began firing a more potent form of gas, causing immediate incapacitation as well as convulsions. Doctors struggled to treat the new symptoms, while often suffering from them as well.

“While we were working, they shot gas at us,” said 31-year-old Hussein Murad, resident surgeon at a nearby hospital and who was managing volunteers at one of the larger triage facilities in the middle of the square. “We didn’t know what it was, everyone was fainting.”

The open-air dirt mound where Murad performs surgery — to extract rubber bullets and buck-shot from protestors’ bodies — looked far from sterile. Surgical tools soaked in a bowl of disinfectant, but Cairo’s dust was frequently whipped up by the wind, settling on the clinic.

His white lab coat smeared with filth and blood, Murad was visibly exhausted and at times incoherent.

“When I’m working on a patient now, sometimes I lose my nerves. I start to twitch, and I can’t concentrate,” he said.

Another doctor, Rania Fouad, 24, was reported dead yesterday from asphyxiation by breathing in the gas, a local newspaper reported. Massoud, however, said she was getting reports that Fouad may still be alive.

But Mohamed Samy, a pharmacist helping pick-up the wounded on the frontline, was shot dead last night by live ammunition, EIPR says.

Other doctors have been arrested or simply disappeared. Two doctors were arrested by security forces but released hours later. Another two volunteers, who turned down a Tahrir-area side-alley to assist two policemen injured by protestors, never returned, one doctor told EIPR.

He did not know their names, so he had no way to find out if they had in fact been arrested.

Massoud says while these types of attacks on medical professionals are unprecedented in Egypt, she does not believe the security forces are targeting doctors because they are doctors.

Health workers are being arrested along with others in the same area, while doctors have rushed to the aid of security forces and regime-hired plainclothes thugs.

Indeed, one of these thugs, according to bystanders managed to infiltrate the largest of temporary hospitals at a mosque outside the square yesterday.

He poured boiling water on one of the patients before a crowd of demonstrators carried him away in a frenzy of kicks and blows.

Finally, he emerged from the mob under the arms of two paramedics who hefted him into an ambulance.

“They do not respect us,” said 24-year-old, Ali Shai, a first-aid-certified volunteer, in reference to the regime. “This whole situation, it is unbearable.”