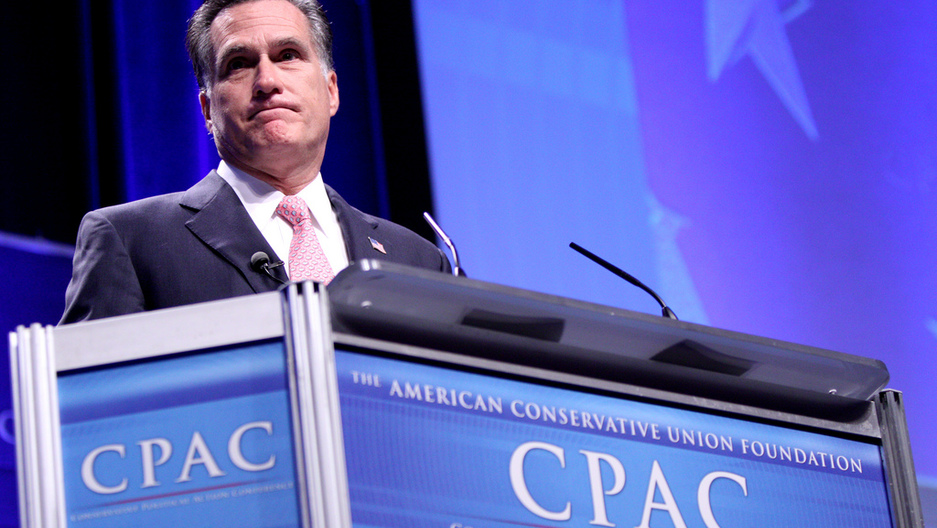 Former Governor Mitt Romney of Massachusetts speaks at CPAC 2011 in Washington, D.C. Romney has struggled to get conservative Republicans to rally behind him. (Photo by Flickr user Gage Skidmore, cc-by-sa.)

As the Republican primary elections come closer, conservative dissatisfaction with the idea of electing Mitt Romney as the Republican nominee appears to be persisting, if not growing.

On Monday, the Huffington Post discussed the idea of an alternative candidate running under the banner of a thid party. In the Los Angeles Times, Mark Meckler was quoted saying that some Tea Party members were discussing the idea of a third party candidate, if Romney wins the Republican nominee. He's hardly the first, though. Pat Buchanan, a previous presidential candidate himself, said back in October that should Romney be nominated, there was real risk of a third party candidate coming forward.

Now, as Newt Gingrich becomes the latest candidate to pick up the mantle of conservative challenger to Romney, more conservatives are willing to at least discuss what it could mean to have a Tea Party-backed candidate independent of the Republican candidate. On it's face, though, it could bring about the exact thing conservatives are most opposed to: another term for President Barack Obama.

In a recent poll, if Texas Rep. Ron Paul or New York Mayor Michael Bloomberg were to run under the banner of a third party against Republican Romney and Democrat Obama, Obama would win a second term. But not so far said Meckler, who's not ready to support an alternative candidate yet, but did acknowledge the discussions going on right now.

"I also think we have to realize we're in a-historic times. There are things that are happening in the political sphere that we've never seen before in this country," he said.

He's pointing to the 2010 election, which saw an unprecedented shift of seats and power in the House of Representatives as well as in state legislatures.

The big complaint against Romney, and even against Gingrich, for that matter, is the lack of principle. With Romney, Meckler said he's concerned that Romney seems to have changed his mind a number of times, particularly with his healthcare proposal (which became the model for President Obama's healthcare plan) and his support for the idea that man has caused global warming.

With Gingrich, it's more of a concern that if Gingrich can't be faithful to his wife (he's on his third marriage) and has been the subject of ethics inquiries, is he the sort of person Tea Party activists want to support.

"We're looking for a candidate who is principled and who has been consistent in their lives," he said.

Meckler said it's hard to predict whether enough members of the Tea Party movement would be upset by a Romney candidacy to support a third party contender.

"They very question on whether there would a third party candidate is still up in the air. The Tea Party movement is not a monolith," he said.

Meckler said he's open to supporting one of the current, non-Romney candidates. But he's waiting for someone to assert themselves and stick around.

"I'm enjoying watching this go back and forth, but no favorite yet."