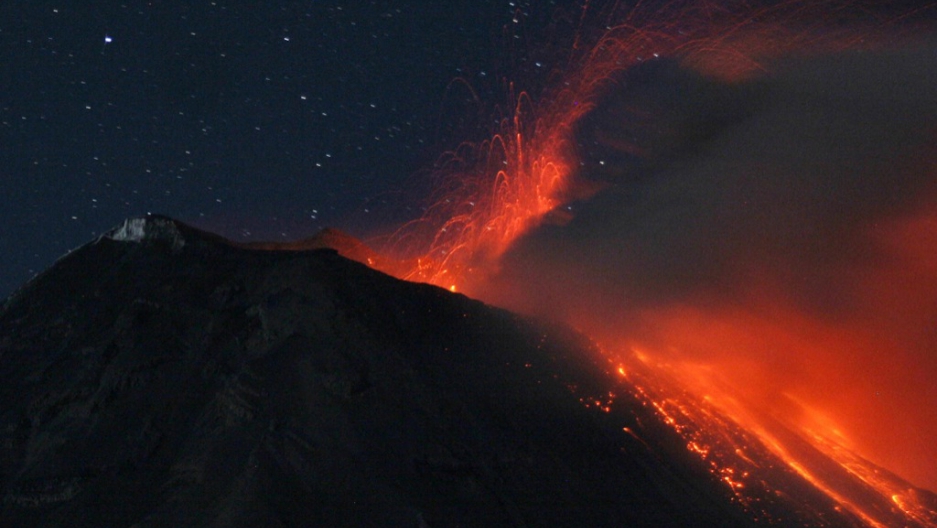 Pyroclastic flows run down the side of the Tungurahua volcano 18 July, 2006 in southern Ecuador.
Credit: Rodrigo Buendia
Share

SAN JOSE, Costa Rica — After Costa Rica's Turrialba volcano awoke last year from more than a century of sleep, Jorge Andres Diaz reckoned it was a fine time for a picnic on the slopes of the 11,000-foot gas-spewing mountain.

His wife, Ana Gabriela Chaverri, thought the idea was a bit mad — but, then again, Diaz always likes to get what seems a little too close to the hot mouth of active volcanoes.

“In situ” volcano measurement — a hairy endeavor that involves sampling gases and particles right as they shoot out of a crater — is a life study for the Costa Rican physicist. The closer he gets to the volcano, he believes, the closer he comes to the data that can ultimately predict eruptions.

Material emitted from volcanoes hints at what's going on down below, says Diaz. If hot magma is stirring underground, he says, that changes the composition of gas and ash flowing up above. Better understanding of the makeup of those signals would perfect prediction capabilities, helping authorities warn nearby residents when to evacuate and airlines when to reroute their planes.

Read more Futurists: Milk from clothing? It does a body good

Diaz's wife may take solace in his latest strategy.

He has begun sending small, unmanned aircraft to hover over Turrialba, keeping him at a safer distance from the volcano, still fuming since its ash eruption in January last year.

The Vector Wing 100, Diaz's 8-foot-by-5-foot aircraft, is a high-density foam wing that contains an advanced computer system that can be programmed to cruise the volcano, snap photos, take video in color or infrared, and collect data on the composition of the volcanic plume.

Coupling the in situ data collected by the Vector with analysis made by remote sensors and satellites in space, Diaz aims to map out a clearer picture of plume activity and composition. The study could greatly improve the way scientists predict which way volcano plumes will move, potentially saving lives and money.

In April 2010, the menacing cloud that spread from Iceland's Eyjafjallajokull Volcano grounded some 100,000 flights across Europe. Airlines said that they lost over 1.3 billion euros (then $1.7 billion), according to The Economist.

"The Icelandic eruption demonstrated the lack of validation that they have on satellite information," said Diaz, who believes that some of the flight cancellations might have been avoided with the right technology in place.

"The images showed part of the volcanic plume, but they were worried about what they could not see. What is the concentration of that plume? At what point does it fall below the detection limit of the instrument? The only way to know is by in situ measurement," he added.

Diaz's seeming obsession with on-the-ground data has roots in breakthrough research he conducted in 1998 at Kilauea, Hawaii.

It was common practice for investigators to bottle up gas samples and take them back to a laboratory to be examined, but ferrying samples around provided incomplete results, Diaz explains.

Helium, which could be a key indicator for predicting eruptions, is so light that it slips through the container seal before reaching the lab.

Diaz's stroke of genius: bring the lab to the volcano.

He took the concept of the mass spectrometer — an instrument that measures the composition of samples and weighs up to 100 kg — and built a miniature, portable version. Bringing it to Hawaii’s Kilauea Volcano to sample chemicals at the site, Diaz wowed volcanologists, won awards and even caught NASA's eye.

After earning his PhD from the University of Minnesota, he took on post-doctoral work in 2000 with the Kennedy Space Center, using the device and his plume-savvy to detect hazardous gases at a spaceship launch site.

"There were very few 'post-docs' at NASA from this area of the world," he said proudly during a recent interview at his lab at the University of Costa Rica.

Diaz was determined to bring his fine-tuned knowledge back to Costa Rica, home of hundreds of volcanoes, about a half-dozen of which are active.

He began studying his country’s volcanoes from above, first on the NASA WB-57 that flew about 12,000 feet over the mountain, and later on a smaller aircraft known as a Cessna that came within 5,000 feet.

But Diaz wanted to get closer.

When Turrialba erupted last year, dozens of nearby residents were evacuated.

Diaz put on a protective mask and went along with a team of researchers, including a NASA investigator, to monitor the activity near its vent.

"It was very dangerous, you could see the ground shaking," Diaz said. "It's like a jet engine, in terms of the noise you hear, and it's just degassing from the magma. And you say, if that's the amount of gas coming out, imagine how much magma is below that."

"He's very brave," David Pieri, investigator of NASA's Jet Propulsion Laboratory, said of his Costa Rican volcano research partner. "It comes with the territory of being a volcanologist. You want to get the data, and it's always a calculated risk."

At that point, Diaz knew the risk had grown very high. He wanted to continue to monitor the volcano but without having to set foot so close to a potentially damaging ash eruption, or worse. Pilots refused to fly him near the plumes, afraid of crossing through particles that could wreck their aircraft engines.

Diaz needed smaller, inexpensive aircraft — and a way to cut out the pilot.

He unveiled his robotic VW-100 in October and put the video of its test flight to the Top Gun theme “Danger Zone”:

The university purchased the UAV from Maryland Aerospace for $40,000. Now Diaz is working on a new model that would slash the price to $2,000.

That’s probably a good thing. Diaz has crashed his plane 20 times already, so destroying the current model would put a serious dent in his research budget.

At the very least, perhaps there’s some reassurance in knowing that no men will have been harmed during the study of that volcano.