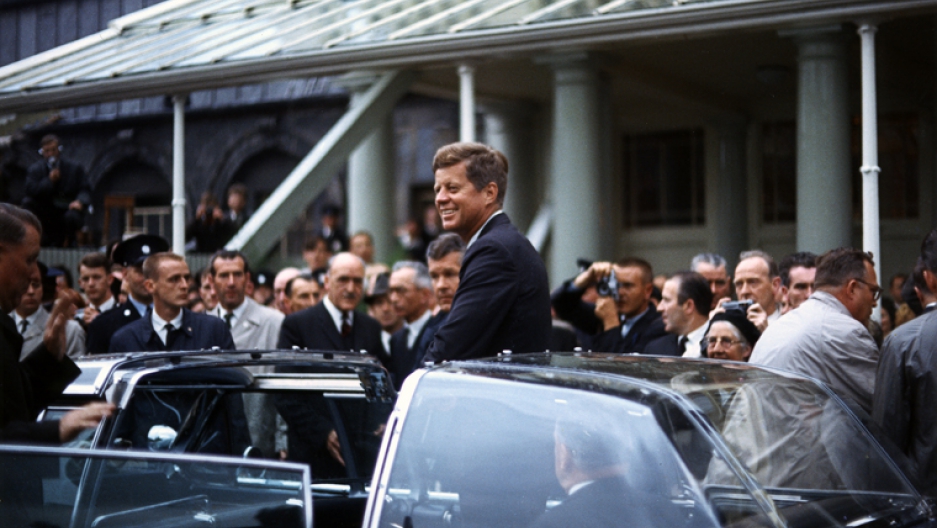 President John F. Kennedy peers out of his limousine during his trip to Ireland in June 1963. Kennedy was treated like a returning hero during his visit. (Photo by Robert Knudsen for the White House, via Wikimedia Commons.)

On this day 48 years ago, in Dallas, President John F. Kennedy was assassinated by Lee Harvey Oswald.

That shooting set into motion a series of conspiracy theories the like of which the United States has not seen, perhaps outside of the controversy over Area 51. But a few months before he was shot, Kennedy took a trip to Ireland. Kennedy was descended from Irish Catholics and for him it was a journey to his ancestral homeland.

He arrived in Dublin on June 27, 1963. Historian Arthur Schelisinger wrote “I imagine he was never easier, happier, more involved and detached, more completely himself.”

Kennedy's trip to Ireland came immediately after his famous speech in Germany where he declared "I am a Berliner."

"For people in Ireland, this was an important moment. This young man of Irish heritage, the first sitting U.S. President to visit Ireland, was sitting among them," said Frank Rigg, the former curator of the JFK Library.

During his trip, Kennedy visited County Wexford and New Ross, his family's ancestral home and the port from which his relatives left for Boston.

"I think it was a very moving moment for Kennedy," Rigg said.

Kennedy also met with members of his extended family that still lived in Ireland.

It was a relaxed and unofficial sort of event, Rigg said, "just like a family gathering."

Kennedy visited major historic sites in Ireland, including the location where leaders of the Easter Uprising were hanged to death, as well as other towns.

He boarded a plane back to the United States, but not before reciting a poem and vowing to come back and see Ireland again.

He never made it.