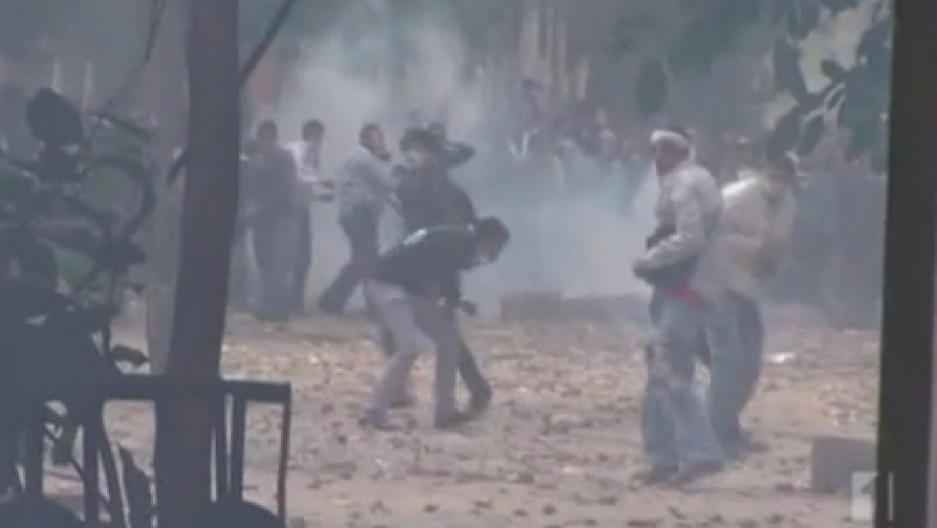 Protesters and Cairo's Tahrir Square are battling with Egyptian soldiers and police after their demands for a more rapid transition to civilian rule were not met. (Photo from ABCau video.)

For the third day in a row, protesters in Cairo's Tahrir Square clased with police and the military as Egyptians press the country's military rulers to move more quickly to civilian rule.

This is the longest, bloodiest protest in Egypt since the Egyptian military forced former President Hosni Mubarak from power back in February, the New York Times reported.

"A representative of the ruling military council, Said Abbas, visited Tahrir Square on Monday and spoke in a brief news conference, where he said that the council respected the protesters’ right to peaceful demonstrations. He declared that the security forces had not initiated any violence but only defended themselves, and he insisted — despite a sweep of the square Sunday evening by hundreds of soldiers and police in riot gear — that the security forces had not entered the square," the Times reported.

According to the BBC, said large crowds were streaming into Tahrir Square Monday evening, in defiance of a military order to stay away. Tear gas was being used on the protesters, the BBC said, while protesters were hurling fire bumbs and concrete and rocks back at soldiers and police officers.

"Amr Moussa, former secretary-general of the Arab League and now a presidential candidate in Egypt, told the BBC World Service that the use of force against the protesters could not be justified.'The way the police deals with the protesters... we're all against this kind of violence and this treatment of the people,' he said," the BBC reported.

That was a common theme among protesters. Many also said that the revolution never ended and this is just a continuation of the original protest from January.

As it stands now, the military plans to retain extensive powers at least through 2013, when presidential elections are scheduled. They've also laid out a recommendation that would see the military retain authority long after the country officially returns to civilian rule.