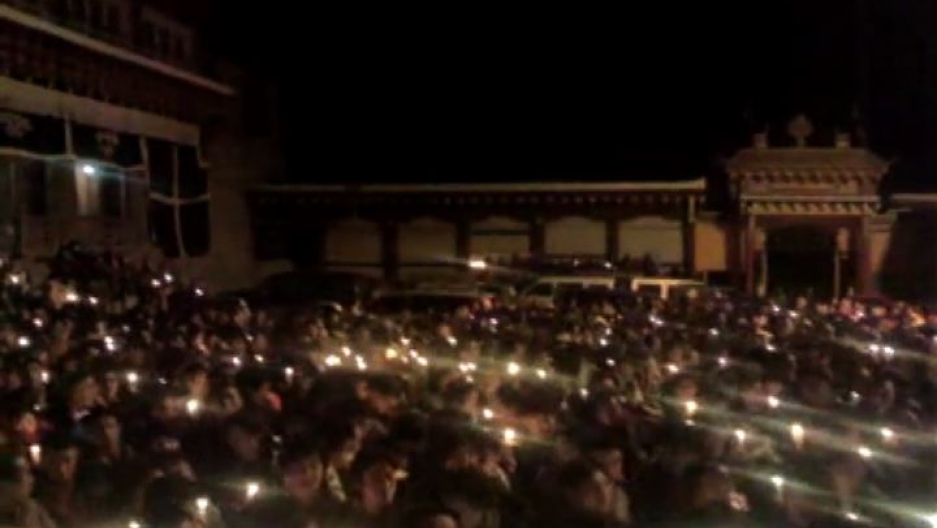 An activist group says 10,000 Tibetans gathered for a candlelit vigil after a nun set herself on fire to protest Chinese policies earlier this month.
Credit: Students To Free Tibet
Share

NEW YORK – Shocking new video that Tibetan activists said they smuggled from the country shows the most graphic images yet seen of a growing protest movement spurred by monks and nuns setting themselves on fire in often fatal displays of dissent against Chinese rule.

The footage — released Monday by Students for a Free Tibet — purports to show a burning figure they say set herself alight Nov. 3 in the town of Tawu, in a Tibetan region of Western China. According to the group, the woman was Palden Choetso, 35, a nun from Geden Choeling Convent, who died of her injuries.

She is one of 11 monks and nuns who have self-immolated since March to protest Chinese crackdowns on Tibetan religion and culture.

Other nuns witnessing the self-immolation in the video are chanting “Freedom to Tibet," according to a press release accompanying the footage. The release said the video also shows thousands of Tibetans gathering in a candlelight vigil early on the morning of Choetso's funeral, and it depicts Chinese security forces converging on Nyitso Monastery, where Students for a Free Tibet said Choetso’s body was taken.

More from GlobalPost: Tibet is burning

Kirti Rinpoche, the exiled spiritual leader of the Kirti Monastery, which witnessed the first self-immolation in March, told GlobalPost in a recent interview that the recent deadly protests are a sign of an oppressed minority pushed to its limit.

“This is something that is being ignited by suffering which people have endured for so long," Kirti Rinpoche said. “Now it has came to a point where they can not endure it any more.”