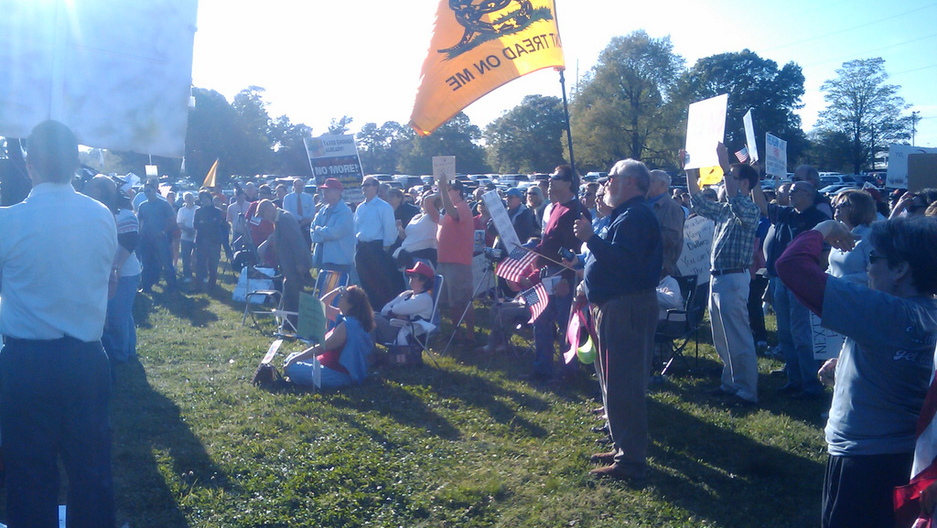 Members of the Tea Party movement in Memphis (some of whom are pictured in this photo from a Memphis Tea Party rally in 2009) invited members of the Occupy Memphis movement to have a conversation with them. (Photo by Flickr user Mick Wright, cc-by-sa.)

In Memphis, the Tea Party activists and Occupy Memphis protesters got together to see if they could better understand each other and find common ground.

Jim Tomasik is one of the organizers of the Mid-South Tea Party and his group invited members of Occupy Memphis to meet with his group after an online discussion started. Malloy Pope and Tristan Tran took up the invitation and met with the Tea Party folks.

"I think there were reservations on both side. We hadn't heard any problems out of Occupy Memphis people, but it's all over the news — stuff going on in other places," Tomasik said.

Pope agreed, but said she has conservative and libertarian friends and was optimistic good conversations could happen.

"I know it can be civil," she said. "There's a lot of misinformation that goes on to both groups."

And, while the discussion was confrontational and strained at times, no violence broke out and the two groups did find some common ground.

“I really do like the point that… the voice of the people is being lost by special interest groups," Tomasik said. "(But Occupiers are) taking their fight to the wrong place in that they’re going after banks and people on Wall Street when they should be going after the government that allows things to happen.”

Pope said there was also some agreement over crony capitalism and bank bailouts.

"They obviously don’t want bank bailouts because that’s just another government expenditure as well as I’ve heard many conservatives ... say that’s not letting free markets be free, that is picking winners and losers,” she said.

The two sides also had a spirited discussion over the presence of a Communist flag at the Occupy Memphis camp. Tran, who is a veteran of the war in Iraq and Pope, whose husband is a veteran, both said they were very patriotic. They said the Communist flag's presence was a divisive symbol within the Occupy movement itself.

"I love the American flag, I’d rather wave that than any other as well. It’s a conflict we’re trying to work on," she said.