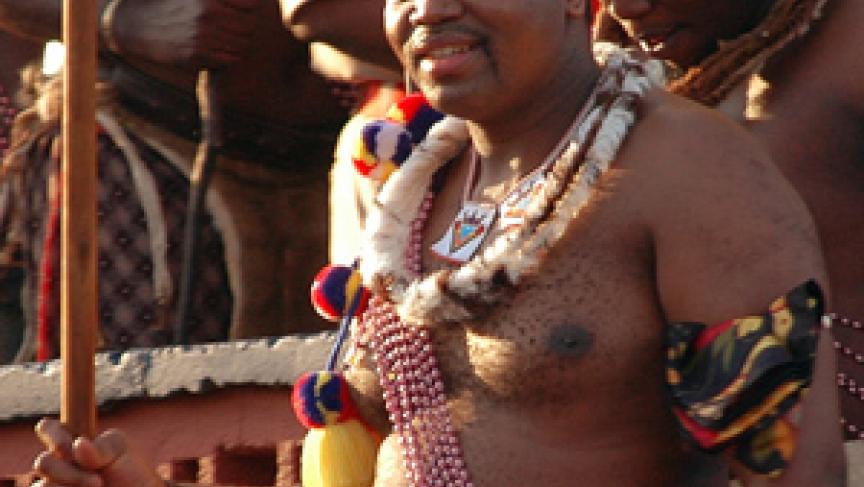 King Mswati III is the last absolute monarch in Africa. He rules over Swaziland. (Photo by Amada44 via Wikimedia Commons.)

The Arab Spring has shaken the foundations of regimes from Egypt to Libya. But so far, Africa's last absolute monarchy hasn't been gripped by uprising.

Swaziland is one of the smallest countries in Africa, positioned between South Africa and Mozambique.

It faces big challenges: a crumbling economy, a devastating HIV/AIDS epidemic and one of the lowest life expectancies in the world.

Swaziland is the continent’s last remaining absolute monarchy: King Mswati III rules with few constraints but presides over a people growing in anger.

A few years ago, King Mswati agreed to be interviewed for an American documentary, called Without the King. At the time he said his country could only succeed if everyone was in it together.

Today that ideal of the Swazi nation pulling together rings hollow for people like Sizwe, a youth leader in the country’s largest city. He lays the blame for Swaziland’s troubles squarely at the feet of the King.

King Mswati III, 43, inherited the crown from his father in 1986, along with a fortune that’s now estimated at about $100 million. He’s taken fourteen wives, and his critics say he enjoys a lifestyle of palaces and plenty.

In contrast, most of his subjects live on less than $2 a day. Some have taken to the streets in protest.

Swaziland’s constitution provides for freedom of expression. But in practice, political parties are banned and authorities have often met political demonstrations with violence.

Still, the protests continue. In recent weeks trade union members, students, and even lawyers, have gathered in their hundreds to vent their frustrations.

But King Mswati is in no immediate danger of being overthrown by his people, partly because he commands a powerful security force. But that’s not the only reason.

Many, like 21-year-old Zama Simelane, believe he’s not to blame.

“It’s the people who are close to him that are actually making these huge decisions,” she said. “It’s just the way the government is being run.”

The way the government is being run is the King’s way. But there’s another reason why Mswati remains strong despite his critics.

“It is a struggle by the people within people,” said Mario Masuku, who leads a banned political group, the People’s United Democratic Movement.

“There [are] no racial concerns, there [are] no ethnic concerns. It is just a people within themselves,” he said.

Masuku’s point is that almost all Swazis share a common heritage, including a common tribal link with the king. Mswati isn’t a colonizer, or even an exotic strongman like Muammar Gaddafi.

But Masuku said he’s not above reproach either.

“Our culture in Swaziland has been politicized,” he said.

For example, King Mswati has taken to appointing tribal chiefs instead of allowing titles to be handed down through birth. That’s shored up his position, Masuku said.

But most Swazis aren’t aware of such political machinations. They just want their voices to be heard, and expressed freely. That’s not an easy thing to achieve, said Hleli Luhlanga, who directs the Swaziland Young Women’s Network.

“When we go to the communities to empower people we have to answer to the police,” she said. “They want to know what our agenda is all about.”

Talking about politics directly isn’t possible, said Luhlanga. “That’s a no-go zone. You are not allowed.”

But change may be only a matter of time. It's eventually come to Swaziland’s neighbors: South Africa, Malawi, and Mozambique. Recently it’s come to some north African countries too.

But Sizwe, the youth activist, said for democracy to come to Swaziland, the country needs help from outside. Even if it’s only the oxygen of international attention.

“We are not getting the attention the other countries are getting, solely because we don’t have anything in hand,” he said. “If you look at Libya, you look at Tunisia, almost all those northern countries, they are rich in oil, they have minerals. So when you bring up the Swazi case, what does Swaziland have? If I try to help Swaziland, what will I get in return?”

For neighboring South Africa at least, there would be something in return: stability across its border. Recently, the South African government offered Swaziland a financial lifeline in exchange for a set of reforms, some fiscal, others political.

Those political reforms would amount to baby steps only. So far, King Mswati has rejected the offer.