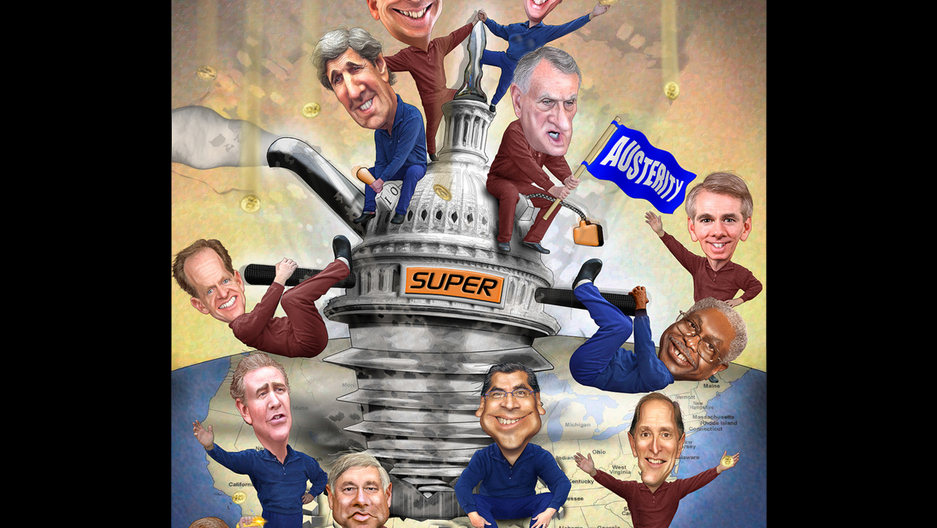 The Deficit Super Committee was supposed to reach an agreement on how to cut the deficit that would be palatable to both Democrats and Republicans. With just hours left before a deal must be reached, all signs point to failure. (Political cartoon by Flick

What was supposed to be a shining moment of bipartisanship in Washington, where Democrats and Republicans would come together to slash the deficit and cut back on the debt, has wound up as just one more example of partisan rancor. With only three days left before their deadline to cut $1.2 trillion from the federal debt, 12 super committee members made the rounds of the Sunday political news outlets and aired their grievances.

Though it's not official — and announcement is expected Monday afternoon — it seems virtually certain the much maligned sequestration of the federal budget will go into effect, with $1.2 trillion in cuts, about half to defense and half to domestic spending and Medicare.

Takeaway Washington correspondent Todd Zwillich said it was those cuts, which everyone hates, which provided the faint glimmer of hope that a deal could be struck.

"Many people thought the enforcement mechanisms hanging over this thing, which are draconian cuts that no one said they wanted...would force people to make a deal," he said. "Both sides will be doing their very best to blame the other side and, again, this is now about the election."

According to Zeillich, Democrats decided 10 days ago that no deal was, politically, better than a deal that wasn't going to get them "shared sacrifice."

There's another problem with the failure to reach agreement. In the coming weeks, several pieces of expensive legislation, like fixing the alternative minimum tax so it doesn't capture more members of the middle class and making sure doctors receive the payments they should from Medicare. All of those pieces of legislation were supposed to be wrapped up in the grand deficit reduction compromise.

Unfortunately, with no deal there, Congress will have to address all of those very expensive bills individually, and they'll have to pass them without adding to the deficit.