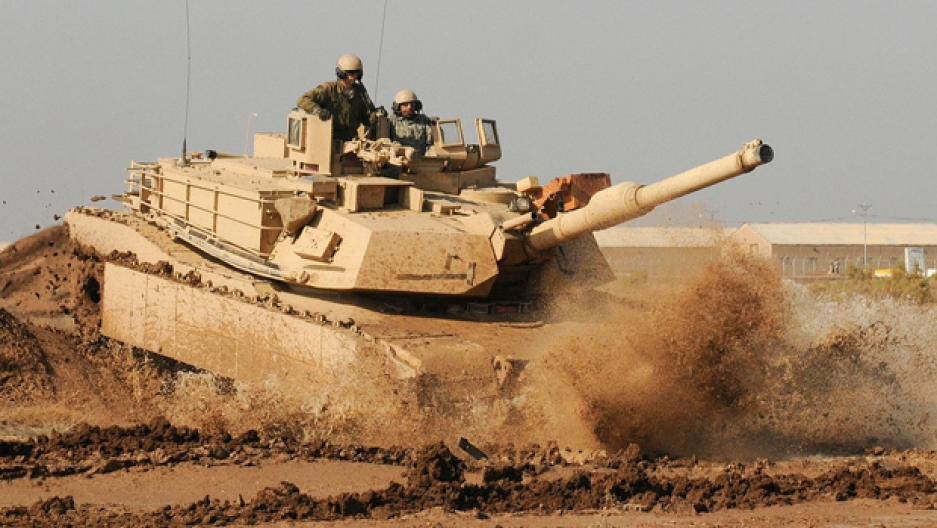 Share
The so-called Congressional Supercommittee is calling it quits. The members cannot agree on a plan to cut the ballooning deficit. That failure supposedly triggers automatic spending cuts, $1.2 trillion dollars worth. The big loser would be the Pentagon. It's slated to be hit with an additional $500 billion in cuts. How that might affect military readiness is one debate. But there's also the question of how defense cuts would affect the wider economy. The World's Jason Margolis takes a look. 800,000 jobs lost. That's what many Republicans estimate would happen if the current military budget is cut by $500 billion. I asked Michael O'Hanlon if that sounds about right. He's author of the new book "The Wounded Giant: America's Armed Forces in an Age of Austerity." He started working thru the numbers. Michael O'Hanlon: "We have about a million and a half people in uniform in the active force. We have about another million in the national guard and reserve. So that's two-and-a-half million total." Michael O'Hanlon: "Roughly another 3 million who are in defense industry or the contractor workforce…" Michael O'Hanlon: "And then on top of that of course you have all the people locally who near a military base run a hot dog stand or a sandwich shop…" So when you add it all up…. Michael O'Hanlon: "You've got 10 million jobs that depend on the department of defense in one way or another at this moment." And if the Pentagon's budget is cut by 10 percent, roughly what the automatic cuts would amount to… Michael O'Hanlon: "So yes, you could in theory, in the short term at least, lose a million jobs or more." That's a scary number, especially in a down economy. But that doesn't necessarily mean a million jobs would be erased from the overall economy. The money saved on military spending could be spent elsewhere. Stephen Biddle at the Council on Foreign Relations says consider the sandwich maker near a military base who loses his job. Stephen Biddle: "If you spend less on defense and in exchange you spend more on, let's say, education. And the result of that increase in education expenditure downstream is some well-educated person who otherwise wouldn't have been, opens a successful software company in New Jersey, hires a bunch of people, those people will eat sandwiches at lunch." Of course that's down the line a few years. And Biddle says it's hard for policymakers to think this way. After all, the sandwich maker near a military base is a real person, with a real story. The hypothetical sandwich shop in New Jersey is an economic statistic. And further, what if that dollar saved on defense spending isn't put toward the education budget? Stephen Biddle: "Maybe they take that defense cut and they use it to reduce deficits. It's generally believed that the higher the federal deficit, the more disadvantageous interest rates are in the economy." So, cutting defense spending could lead to easier borrowing for small businesses and potential homebuyers. Point being, there are clear economic losers if military spending is cut. But there are also winners. They're just harder to see. Overall, Biddle says, military spending isn't the best way to stimulate the economy. For instance, a great deal of military spending goes toward buying capital equipment, things like tanks, guns and fighter planes. Now compare an Air Force purchase with a commercial airliner. Stephen Biddle: "When United Airlines buys an airliner, they're making an investment in a piece of capital equipment that's going to generate more income and more economic activity in the United States when they sell tickets to fly people from point to point in the airliner. When the Air Force buys an F-35 — unless they're going to sell joyrides in the cockpit, which they're probably not going to — that's not a purchase of capital equipment that's going to generate more income and more economic activity within the United States." That's not to say military spending doesn't help the economy in many ways. Loren Thompson with the Lexington Institute says it all depends on what you're trying to accomplish. Loren Thompson: "If you're trying to stimulate technological innovation, defense spending is very important." Things like satellites, jet engines, and the Internet — drivers of the modern economy — all got started by the military. But… Loren Thompson: "If you're trying to create jobs, large numbers of jobs, it's not as efficient because the money tends to go into a relatively small number of high-paying jobs, rather than a larger number of jobs in areas like construction or education." Michael O'Hanlon agrees that military spending is not the best job creator… in the long term. Michael O'Hanlon: "But in the short term, when we're in this kind of a fix, and we're almost looking for excuses to stimulate the economy — and of course the 2009 stimulus bill did just that — it makes sense to be attentive to the fact that any kind of cut in government spending could have a negative effect right now. So you've got to balance these two concerns." Of course, these are all economic arguments. And at the end of the day, policymakers are most vocal about what it takes to keep the nation safe. In recent years, however, there's been little acknowledgment of the costs. Even now, some members of Congress who want to lower the deficit are, at the same time, talking about repealing the automatic cuts to the military before they've even happened.