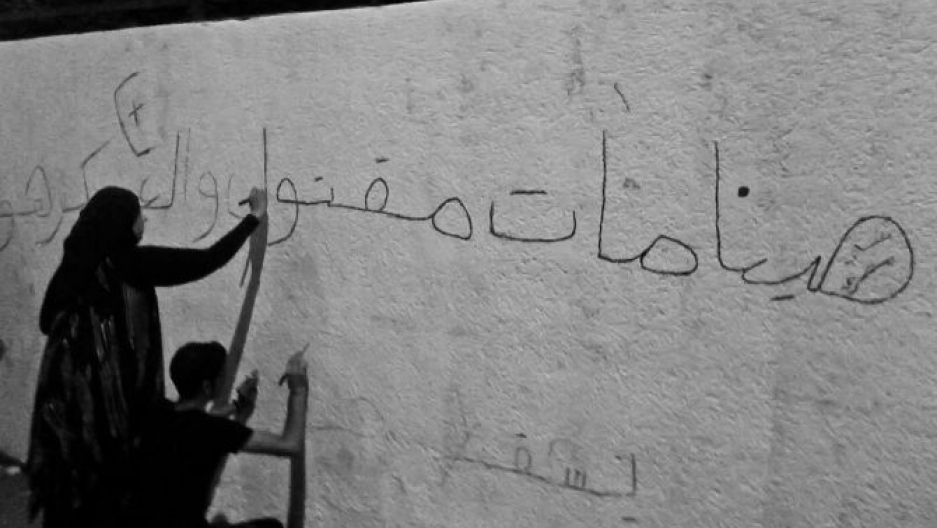 A young woman paints grafitti on a wall next to the Coptic Hospital a day after Maspero clashes between army & protesters killed 27, including young activist Mena Daniel. The grafitti reads, "Mena was murdered and the [military] council is responsible."
Credit: Ben Brody
Share

CAIRO – So, is it a revolution? With running battles taking place once again in Tahrir Square, this question still tumbles and smolders in Egypt like a verbal tear gas canister. It’s hard to say whether the protest movement that toppled Hosni Mubarak in February is in fact a revolution. I guess it depends how you look at the word ‘revolution.' So let’s start with the definition. The Merriam-Webster’s dictionary definition of revolution, in the political sense, is as follows:

REVOLUTION ( noun) a : a sudden, radical, or complete change b : a fundamental change in political organization; especially : the overthrow or renunciation of one government or ruler and the substitution of another by the governed.

We asked our GlobalPost/Open Hands Initiative reporting fellows and our editing team on the ground to answer whether or not the events of the last nine months in Egypt are indeed a revolution.

Here are their answers:

No, it was not a revolution. It was an 18-day uprising and a popularly-inspired transfer of power from one military leader to another.

It is an ongoing revolution. Hopefully it will not turn into a coup.

It’s not a revolution, just an uprising that turned into a coup d'etat. It has a chance to become one if people have the real "will".

I still ask this question to myself on a daily basis "Is this a revolution?"

For me, I think it is a bit unfair to ask this question now, it has been only 8 months, in which it is going to be so difficult to describe the nature of what's going on. But from what I have seen, it is so difficult to call it anything but a revolution still in the making. Many waves of the revolution are yet to come, so I think it is better for us to answer this question after a couple of years.

I believe it is a revolution. Not only because Egyptians would never bow down for a tyrant again. But mainly because of the thousands of protests and strikes organized by people who were never politicized promise that this revolution is destined to triumph sooner or later.

Yes. But it was a revolution of a people, not of a country. Egyptians have changed, and now it is Egypt's turn to experience a revolution.

Nope, at this stage, not a revolution.

A "revolution" would be a much deeper turnover of power than we've seen so far.  There's a member of the former regime still controlling almost every state institution — including the ruling military council.

It is the beginnings of what may be a revolutionary shift in Egyptian society - the system is changing, what it will change to remains to be seen.

Yes, a revolution...but one that is not over.

It's a revolution in the making. The removal of Hosni Mubarak was cosmetic. Its inherent political and economic power structure remains almost intact.

No, it was an uprising. The revolution is still ongoing and it seems, inevitably there will have to be another round in order to counteract SCAF who has hijacked the movement.

No. Not yet. Removing a leader is not a revolution. There has been no fundamental change, just a change of figurehead.

Depending on how things progress, it will either be a successful revolution, or a full-on military coup. I think right now, it is a bit of both: Half revolution, half coup.

Yes. It was a revolution because there was a fundamental shift in society that empowered Egyptians and changed the way they interact with their government.

This looks like a revolution in the making. The people’s uprising has set Egypt on course for a new way of life. Free elections, a new constitution and a civilian president must be achieved before it can be considered a successful revolution. It looks like this will take years not months, but it should be expected that such a massive democratic project will take time.

It should have been expected in the land of the pharaohs that once the head of the pyramid was removed, those under him would still run the show. So in response to this question, if this were to be called a revolution it would be appropriate to call it a half-ass one. Excuse my "French."

Change is unlikely to occur overnight especially in a land of such a rich cultural heritage. This is especially true of a culture deeply embedded in traditions and religion.

It will take generations to resolve, as one of our speakers [Human Rights Watch’s] Heba Morayef so eloquently put it.