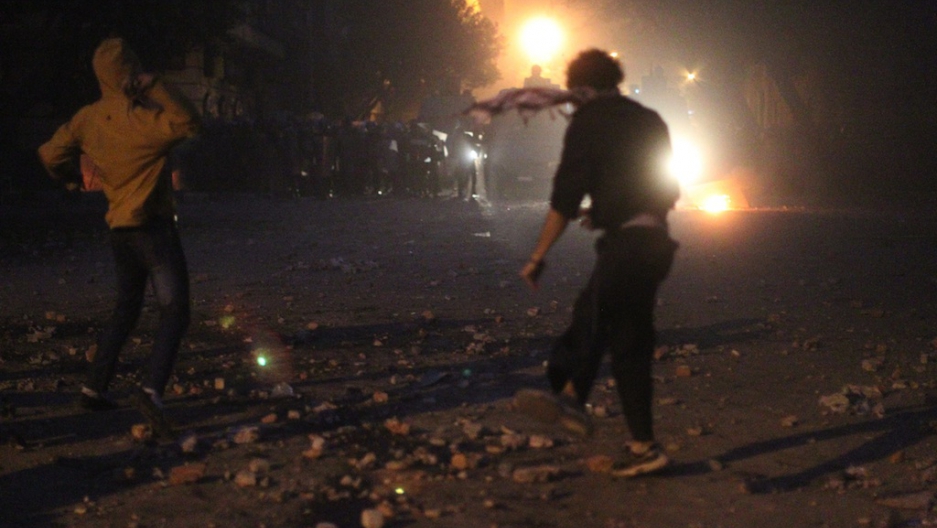 Egyptian protesters throw stones during clashes with riot police at Cairo's landmark Tahrir Square on November 19, 2011, as Egyptian police fired rubber bullets and tear gas to break up a sit-in among whose organisers were people injured during the Arab Spring which overthrew veteran president Hosni Mubarak.
Credit: Khaled Desouki
Share

CAIRO, Egypt —Hundreds of Egyptian riot police fired teargas to forcibly disperse a crowd of protesters in Cairo’s Tahrir Square on Saturday, less than two weeks before the nation’s first democratic election in the post-Mubarak era.

The streets near Tahrir were blanketed in thick white tear gas all afternoon and shotguns rang out into the evening, as police and protesters waged an intense, hours-long battle for control of the iconic square.

Police forces, armed with shields and wooden batons, fired shotguns with rubber pellets in the direction of the demonstration.  The crowd of young protesters returned fire with rocks and molotov cocktails, and eventually torched a large security vehicle they had commandeered earlier in the day.

By nightfall, the square had exchanged hands at least twice - and clashes were still ongoing.

At least 80 people were hospitalized for injuries, according to Ahram Online. Al-Jazeera reported 4 arrests, but more than a dozen detainees could be seen in police custody by evening on Friday. Many of them were beaten and punched by riot police as they were dragged away.

An Egyptian security official said the clashes were the result of "chaos, not activism.”

“The actual revolutionaries left the square yesterday. Those who are currently there, are instigators sent to create problems," said Sami Sidhom, an assistant to the minister of interior, according to Ahram Online, which cited an Al-Jazeera interview.

Hundreds demonstrators had been camped out in Tahrir since Friday evening, following one of the largest rallies in the square in recent months.

Tens of thousands of Egyptians - mostly Islamists - converged in Tahrir Square on Friday, criticizing military rule in the country.

But in the nine months since the ouster of Mubarak, many Egyptians have increasingly wondered how much has actually changed. Critics accuse the military of impeding political reform while bringing back the more autocratic hallmarks of Mubarak’s rule, like torture and arbitrary arrest of citizens.

More from GlobalPost: Live coverage of the Tahrir Square protests

The latest clashes in Cairo come less than two weeks before Egypt’s first election since the fall of Mubarak.

Egyptians head to the polls next week in the first phase of an election for the lower house of parliament.

The latest clashes in Cairo may leave some voters concerned about the security situation in Egypt.

“The main problem facing Egypt during this election is the lack of security. This could be a dangerous scenario. I’m not optimistic,” Judge Amir Adel Ramzy told GlobalPost last week.