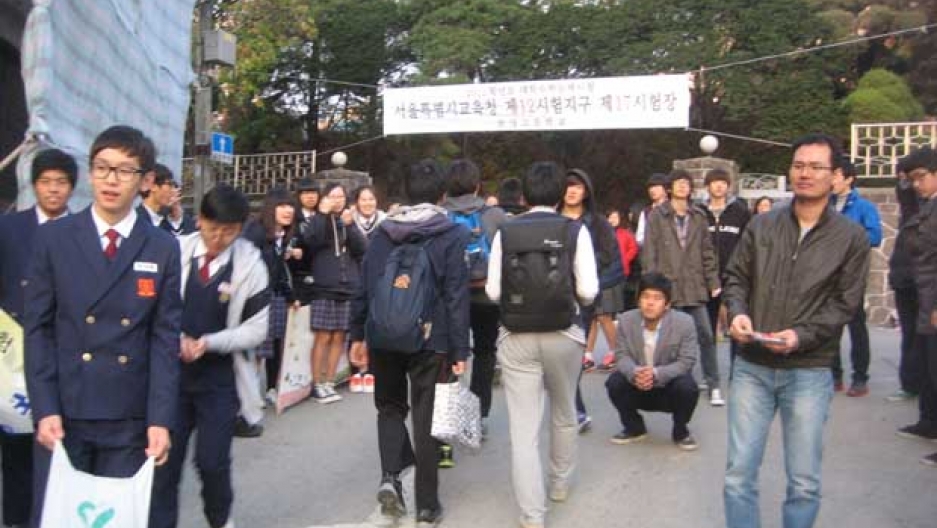 Share
Korea has won a lot of praise, in particular from President Obama, for its rigorous education system. Up to 80 percent of high school graduates there go on to college. But there aren't enough jobs for all these highly educated students. So now the Korean government is trying something new. It's encouraging families to consider something other than college for their kids. Lee Gun-young, a 19-year-old college student, headed toward In Jang Boys High School. Lee was about to take Korea's high-stakes university entrance exam for the second time. "I feel confident," he said. "This test will determine the rest of my life" Famous Universities Lee wasn't the only student taking the test for the second, and in some cases, third time. Many hope to improve their test scores so they can transfer to a better university. Still, for most Korean families, there are only four schools in the entire country that really matter. Bae Tae-il, who dropped off his son at the testing center, said a college's name really means a lot in South Korea. "If you get into a famous university, you have more opportunities to define your life," he said. "You get more respect from other people depending on what school you go to." But some observers warn that Korea's obsession with getting into "the right school" is out of sync with the job market. Jasper Kim, a visiting scholar at Harvard who teaches East-West comparative studies, said Korea is experiencing "educational inflation." "There are a lot of highly educated, arguably over-educated people, but on the flip side, the demand side, they all want to work for a narrow bandwidth of companies, namely the LGs and Samsungs of the world," Kim said. "But they only need a few people and they only pluck those people from a certain narrow bandwidth of schools. So the question is what happens to the rest of the pack who don't get selected." According to Kim, they become second-class citizens, with fewer opportunities for employment and even marriage. Government figures indicate that less than half of 2010"²s university grads have found full time jobs. And Korean media regularly feature stories about master's degree holders taking low-skill jobs away from those with only high-school diplomas. One way the South Korean government is trying to address these problems is to promote vocational schools as an alternative to college. Meister Schools Even the South Korean President is getting involved. Lee Myung Bak was on hand in 2010 for the opening of the Sudo Electric Technical High school in Seoul. Sudo is one of 21 so-called Meister Schools, which are modelled on German academies. They're fully funded by the South Korean government. All Meister students are guaranteed a job once they graduate, through an agreement with Korea's electric power authority. Some, like 17-year-old Lee Se-kyul, have already been offered jobs, in his case, with Samsung's electronics engineering department. Lee said if he went to a normal high school or university, I would've had a much harder time finding a job, especially at Samsung. "I have no regrets about going to this type of school," he said. Getting South Korean companies to accept students without a university degree is one thing. Getting acceptance from Korean society may be more difficult. Geum Donghoe, who teaches in Sudo's IT department, said the technical education here is as good as you get at some universities. "I don't see that much difference between our students and those who have some special degree," Geum Donghoe said. "Maybe once our students' performance comes out, then maybe people would admit they don't have to go to a prestigious school or graduate school" But deciding to skip college is still a hard choice for young Koreans. Sudo student Seo Hyun Joo said she'll keep her options open. "I'll still be young and have many options to choose from after I graduate," she said. "I'll start work and see how I like it. If I don't, I'll just study for the university exam."