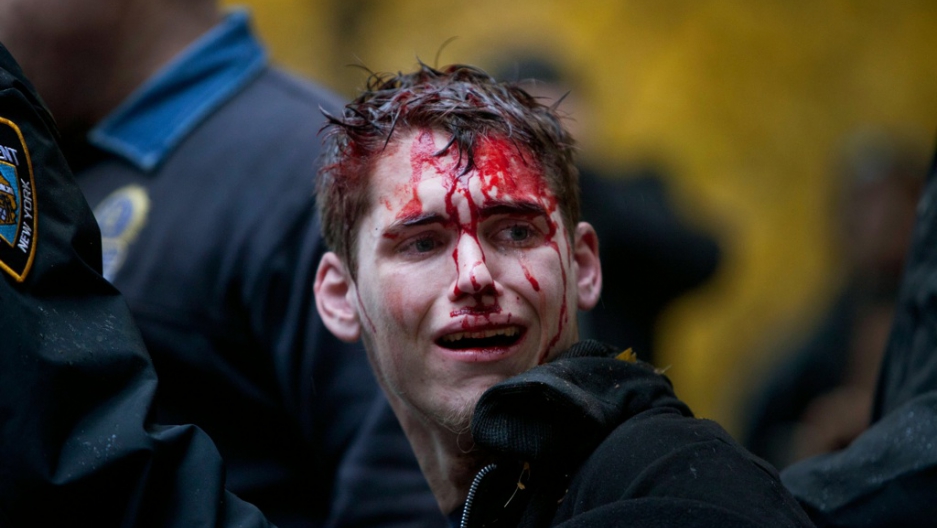 A man who identified himself as Brendan Watts is seen with blood on his face while surrounded by three police officers in Zuccotti Park on November 17, 2011, in New York City. A fight broke out between protesters affiliated with Occupy Wall Street and police, in which Watts was injured.
Credit: Andrew Burton
Share

BOSTON — For nearly our entire history as a country, Americans have shared a social contract.

One of the cultural characteristics that makes America great is the fact that we celebrate winners in our society. We look at people like Bill Gates and Steve Jobs and we say to ourselves, "If I work hard enough, I can be like them."

So we look in the mirror each morning and ask, "How am I doing? Am I working hard enough? Do I have the right education, skills and talent to succeed in this country?"

We don't blame the rich for their successes, this cultural norm goes, because we know they worked hard and got what they deserved.

Instead, Horatio Alger-like, we turn these impulses inward in the name of self-improvement. We turn the success of others into models for our own behavior. We do not direct our personal frustrations and hostilities onto others.

This cultural reality in the US — this shared belief that hard work leads to economic success — has helped promote political stability and propel economic growth through the decades.

This idea has helped hard-working Americans grow richer, regardless of where they started and is perhaps the most important economic contribution the US has made to human society.

The critical assumption here, of course, is that the system needs to be fair. The rules of the game need to apply to all.

And that's where the trouble starts.

The Occupy Wall Street movement is rising up against the reversal of this largely unstated social contract.

Right on cue, protesters nationwide are massing. They are demanding change. They are standing up to what has become — to the perceptions of far too many Americans — a rigged game.

A glance at the many protest signs from around the country makes the point:

"I am a human being, not a commodity"

In short, the social contract in America is broken. The optimistic glue that has successfully held together so much diversity, so many disparate dreams, for so long, is coming undone.

This is the unspoken message behind the Occupy Wall Street movement — in New York, Boston, Oakland, Portland and in all the other unhappy cities around the US. Its echoes can be heard around the world, from Tahrir Square, to London, to Tokyo, to every other place where economic inequality is today rearing its ugly head.

This is the larger point that so many people are trying to make, in so many different places.

Understanding this root cause is critical to addressing the problem, and finding a potential solution.

Unfortunately, the 99 percent and the 1 percent appear to be miles apart.

Read the following statement attributed to Dennis Gartman, author of the popular financial industry newsletter the Gartman Letter, that was published Thursday on the FT Alphaville blog:

"We celebrate income disparity and we applaud the growing margins between the bottom 20% of American society and the upper 20% for it is evidence of what has made America a great country. It is the chance to have a huge income… to make something of one’s self; to begin a business and become a millionaire legally and on one’s own that separates the US from most other nations of the world. Do we feel bad for the growing gap between the rich and the poor in the US? Of course not; we celebrate it, for we were poor once and we are reasonably wealthy now. We did it on our own, by the sheet dint of will, tenacity, street smarts and the like. That is why immigrants come to the US: to join the disparate income earners at the upper levels of society and to leave poverty behind. Income inequality? Give us a break? God bless income disparity and those who have succeeded, and shame upon the OWS crowd who take us to task for our success and wallow in their own failure. Income disparity? Feh! What we despise is government that imposes rules that prohibit or make it difficult to make even more money; to employ even more people; to give even more sums to the charities of our choice. That is what we despise."

Yes, Gartman is tapping into this rags to riches tradition in America. But this argument — which is a common refrain among those fighting for the staus quo — ignores what every child on every playground in the US intuitively knows: the rules of the game have to be fair.

Prior to this chaotic moment in our history, most Americans could turn their personal frustrations into productive energy. They could work harder. They could plot, plan and dream about riches. And, god bless America, millions succeeded in these endeavors.

But this social contract only worked if there was reasonable hope that these human energies would produce results. This only worked, in other words, if fairness was the norm.

This is also the larger point that Nobel Prize-winning economist Milton Friedman — the free markets heavyweight champion of the world — made regularly.

In his seminal 1960 work Capitalism and Freedom, Friedman wrote the following:

"The existence of a free market does not of course eliminate the need for government. On the contrary, government is essential both as a forum for determining the "rules of the game" and as an umpire to interpret and enforce the rules decided on.

In 1970, Friedman was at it again, this time on the social responsibilities of business as it relates to profit:

"There is one and only one social responsibility of business — to use its resources and engage in activities designed to increase its profits so long as it stays within the rules of the game, which is to say, engages in open and free competition without deception or fraud."

So long as it stays within the rules of the game, Friedman believed, business was the best mechanism for producing social harmony.

According to most OWS protesters, this is precisely the problem: the American system is no longer free or fair (bankers win). The rules of the game no longer apply equally to all (lobbyists hired by the most powerful write the laws). The government's umpire role is non-existent (Washington is staffed with former Goldman Sachs CEOs who bail out banks instead of helping "regular people").

But goverment has a role to play, even if it's the limited one of allowing a sense of fairness back into the American story.

Vitriolic rampage against government only creates more division. Vilification of the less well-off is no answer to this country's rising inequality problems. Triumphalism from society's winners breeds abhorrence from the rest.

Taken together this toxic mix of anger, frustration, and rising contempt from all sides threatens everything that America — the most successful economic engine the world has ever produced — once represented for all.