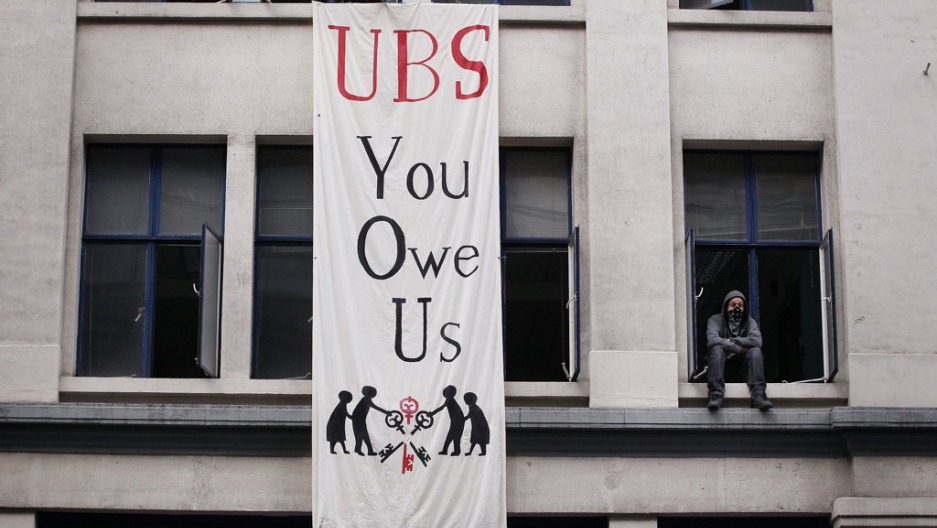 They describe the occupation as "public repossession."

"As banks repossess families' homes, empty bank property needs to be repossessed by the public."

Activists took over the abandoned office block in Hackney, east London, on Thursday night, according to their statement. They claim they now have a legal claim to the building, which they say has lain empty several years.

The protesters plan a "non-residential occupation," meaning that they will not camp inside the building, but instead open it to supporters as a "Bank of Ideas" with discussions and events.

They have contacted the UBS subsidiary that owns the offices in a bid to come to an agreement over the site, the occupiers said in a press conference Friday afternoon.

UBS is aware of the occupation and currently pursuing legal action, a spokesperson told the Guardian.

According to reporter Peter Walker, who was at the site Friday morning, the company sent its own private security guards, who stood outside the building but did not enter.

A team of armed police then arrived, Walker said, followed by a police helicopter. They reportedly left without making any arrests.

Walker gave this description of the site:

The new building is a huge, four-storey office building of, I'd guess, 1970s vintage. It was occupied last night, and has a notice in the window saying it is being squatted. Those inside say there are just under 30 people in there.

The UBS occupation is the protesters' third in London.

They remain at their original encampment outside St Paul's Cathedral, having ignored a City of London eviction order that told them to leave by 6:00 PM Thursday. They now face being taken to the high court. They also have a campsite at Finsbury Square in central London.