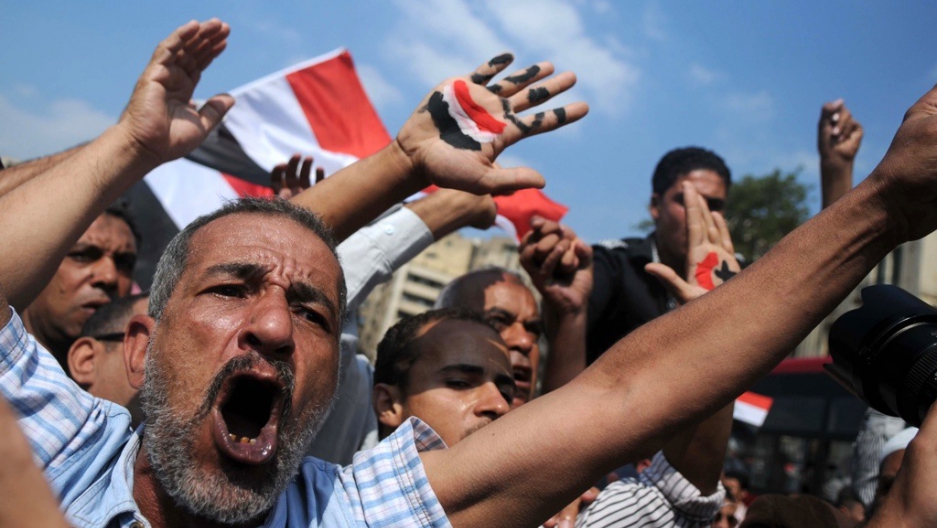 An Egyptian demonstrator shouts slogans during a rally in support of national unity in Cairo's Tahrir Square on Oct. 14, 2011.
Credit: Mohamed Hossam
Share

CAIRO, Egypt — When Gameela Ismail brought her tiny political campaign to the winding back alleys of Boulak on a recent weekday night, the otherwise quiet working-class neighborhood erupted into an impromptu and raucous celebration of democracy.

An old man jumped onto the candidate’s makeshift stage and belted out a patriotic song. Dozens of men at nearby sidewalk cafes joined in, laying down their hookah pipes to clap along to the revolutionary lyrics.

Ismail, a 45-year-old former TV presenter who is now running for parliament, took questions from the lively crowd on subjects ranging from unemployment to rising food prices to security.

Of course, Ismail didn’t have all of the answers. But it didn’t really matter to the people listening. They were just happy to be participating in the kind of political activity would have been impossible during the reign of former president Hosni Mubarak.

“Last year was the end of an extremely dark age we were living in. We didn't have any horizon,” said Ismail, who also ran and lost in 2010. “This election is going to be different. Now there is something for Egyptians to look forward to.”

But beneath the surface are worrying signs that some of the old electioneering habits of Mubarak and his National Democratic Party (NDP) are alive and well, among both candidates and the transitional military rulers, who appear increasingly reluctant to give up too much power.

For decades, Egypt’s legislative elections were dominated by the NDP, which won most elections by landslide margins, but always amid allegations of vote-rigging, fraud and state-sponsored violence at the polls.

Egypt still has a vibrant marketplace of “vote-traders,” he wrote this week in a local newspaper, who can buy blocs of votes for any candidate.

“The challenge we've faced is how to stay away from the election market and its corruption, and be able at the same time to reach areas under their control and communicate with the voters on the base of a political project, not on the platform of electoral bribery,” Hamzawy wrote in the independent Sharouk newspaper on Nov. 12.

Mahmoud Salem, a young candidate making his debut run in the same Cairo district, said he had also seen evidence of these “election markets.”

“Suddenly now, you get offers from people willing to sell you thousands of votes. Or people who are saying we can forge stuff for you. Or we can beat up anybody,” Salem told GlobalPost last month, adding that he would rather quit than win through corruption.

Some candidates have also cried foul at the apparent use of food to influence voters.

Earlier this month, several Muslim Brotherhood candidates gave away free lamb and beef as a charitable act to celebrate the Islamic holiday of Eid al-Adha. Islamists also sold half-priced vegetables to residents in some Cairo districts.

“They give people free meat, then they take their phone numbers and call voters on the day of the elections. It may not be illegal, but it’s unethical,” said Ziad el Elaimy, 31, who is running in Helwan, an area south of Cairo.

Egypt’s military-led government, which assumed power after Mubarak’s ouster in February, has repeatedly pledged to hold “free and fair” elections as the first step in a transition to civilian leadership.

But the army has prevented most foreign observers from monitoring the vote, calling it an affront to the nation’s sovereignty. Only one foreign group, The Carter Center, was granted limited access to “witness” the vote, not observe it. During Tunisia’s election last month, by comparison, hundreds of foreign election observers were present, as well as thousands of local ones.

Many Egyptian nongovernmental groups monitoring the election said that they too were denied any real authority to intervene in the event of fraud.

The most cynical Egyptians believe that such moves show how reluctant the military is to hand over power to democratically-elected leaders that would have oversight of the army’s massive, and secret, budget.

Delays by Egypt’s election commission in releasing a comprehensive candidate list have also eroded public confidence in the electoral process. With just under two weeks before the vote, many in Cairo still have no clue who is actually running in their districts.

“The way they have managed this election process has astonished even the people who were optimistic about these elections,” said Negad el Bora, an Egyptian human rights lawyer. “They don’t want to listen to anyone. We tried and tried and can’t force them.”

Many Egyptians are hinging their hopes on the country's judicial branch, which will dispatch about 10,000 judges and other officials to administer the voting process, which is scheduled for Nov. 28.

But even the judges have their doubts. Many are worried for their safety, according to Amir Adel Ramzy, one of the lead judges in the northern city of Tanta.

Police officers who fled their posts after Egypt’s January uprising, leaving the unstable nation with a dangerous security vacuum, have yet to return.

And last month, thousands of police officers went on strike across the country to demand better wages and benefits. Some threatened to leave polling stations unguarded if their demands were unmet, according to local reports.

“The main problem facing Egypt during this election is the lack of security. This could be a dangerous scenario. I’m not optimistic,” Ramzy said.