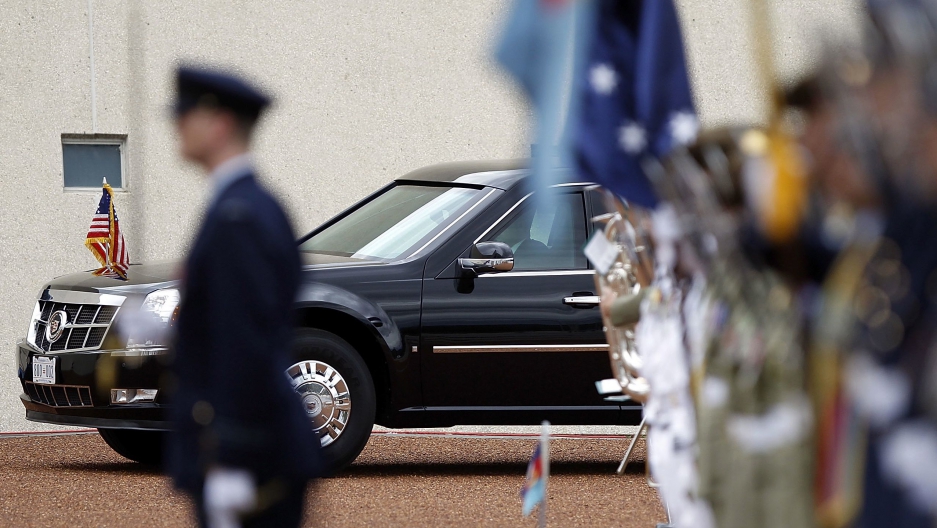 President Barack Obama arrives at the forecourt of Parliament House in Canberra, Australia, on the first day of his 2-day visit Down Under, Nov. 16, 2011.
Credit: Stefan Postles
Share

All that's missing is the stamp that reads:

Top Secret! (If found, please return to US Secret Service)

A booklet detailing Barack Obama's security arrangements during his Australian visit this week has been found lying in a gutter in Canberra, the Australian capital.

Obama left Australia late Thursday, after a high profile — and highly controversial — visit during which he announced a build-up of US troops on Australia's northern border with Asia.

(GlobalPost reports: Obama tells Asia that US is "here to stay" as Pacific power)

The Sydney Morning Herald, whose reporter happened upon the booklet — titled "Overall Program and Orders of Arrangements: Program for the State Visit to Australia by President of the United States Barack Obama" — considers it "a significant and hugely embarrassing security slip-up."

''If that had got into the wrong hands it would certainly put the President and some of his entourage at risk, if someone could respond quickly enough to having the information,'' said Dupont, from Sydney University. ''Even if you were an ordinary crim, there would be a market for that kind of book, so it's not good news.''

The booklet describes Obama's Australian schedule "down to the minute, as well as the breakdown of his security convoy, and the mobile numbers of dozens of senior US and Australian officials," the SMH reported.

The cover of the 125-page booklet even reads: "is not to be communicated either directly or indirectly to any person not authorized to receive it."

The booklet names a long-standing member of the secret service and details seating arrangements for the presidential motorcade, even even describing from which limousine door the President will enter and exit.

Oops. Or, as the Aussies would say, crikey.