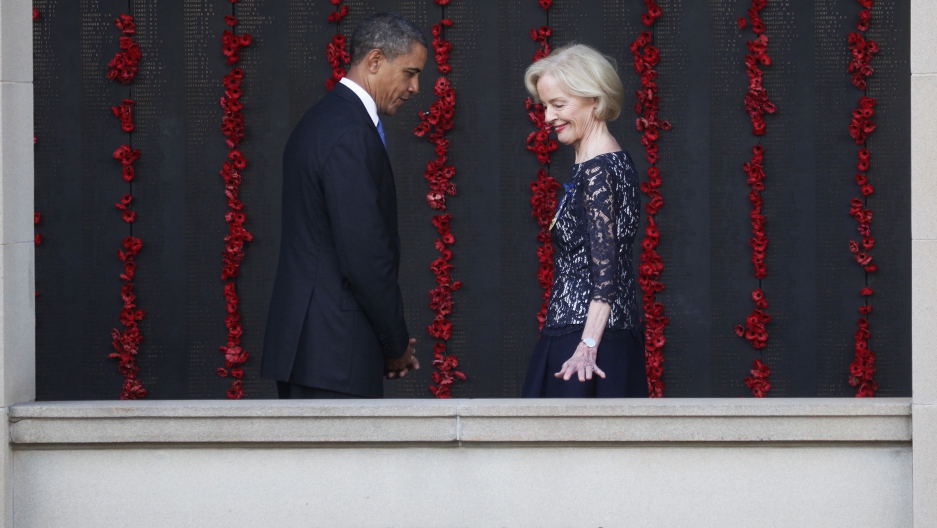 BRISBANE, Australia — President Barack Obama said Thursday that the US would make the Asia-Pacific region a "top priority" as the wars in Iraq and Afghanistan wound down, and that despite budget constraints America was "here to stay" as a Pacific power.

In an address to Australian lawmakers in Canberra, Obama said Asia-Pacific countries would play a vital role in shaping the world in the 21st Century.

"With most of the world's nuclear powers and some half of humanity, Asia will largely define whether the century ahead will be marked by conflict or co-operation, needless suffering or human progress," he said.

He stressed that any reductions in US defense spending would not come at the expense of maintaining a strong military presence in the region to protect America's "unique ability to project power and deter threats to peace."

"After a decade of extraordinary growth in our military budgets — and as we definitively end the war in Iraq, and begin to wind down the war in Afghanistan — we will make some reductions in defense spending," Obama said in remarks seen as an attempt to allay concerns that intensifying pressure to cut the US budget deficit would lead to a weakened U.S. footprint in Asia.

However, he added, "reductions in U.S. defense spending will not — I repeat, will not — come at the expense of the Asia Pacific.

In fact: "As a Pacific nation, the United States will play a larger and long-term role in shaping this region and its future, by upholding core principles and in close partnership with allies and friends."

On Wednesday, Obama and Australia's prime Minister Julia Gillard announced an agreement to boost the presence of U.S. forces on Australian soil.

Australia has agreed to host a force of 2,500 U.S. Marines to be based in Australia's Northern Territory for rotating six-month deployments.

In addition, Canberra will allow greater use of Darwin air base by US military aircraft, including jet fighters and bombers, and of Western Australia's Stirling naval base by U.S. vessels.

China reportedly reacted swiftly, suggesting the deployment of U.S. troops to Australia may not be appropriate and should be discussed within the international community.

The Australian newspaper, meanwhile, quoted an editorial in China's state-owned People's Daily as admonishing Australia for relying on China for its economic interests while turning to the United States for political and security purposes.

The editorial also warned that Australia risked being "caught in the crossfire" if the United States used new Australian-based military forces to threaten its interests.

"Australia surely cannot play China for a fool. It is impossible for China to remain detached, no matter what Australia does to undermine its security.

"If Australia uses its military bases to help the US harm Chinese interests, then Australia itself will be caught in the crossfire."

In his speech to lawmakers on Thursday, Obama insisted there was nothing inappropriate about the US troop deployment Down Under.

Rather, he said, it would provide new opportunities to train with allies and partners and also improve US responsiveness to humanitarian crises and disaster relief in the region.

He repeated comments made Wednesday that the US welcomed the rise of a peaceful and prosperous China and would "seek more opportunities to work with Beijing, including greater communication between each other's militaries to promote understanding," VOA reported.

The U.S. president addressed the Australian Parliament on the second day of his visit to the country, which falls midway through a nine-day Asia-Pacific tour.

He goes next to Bali, where according to Reuters "he will seek to underscore a focus on Asia by becoming the first U.S. president to participate in the East Asia Summit, a diplomatic bloc that admitted the United States and Russia this year."

In his speech, Mr. Obama also said human rights violations persist in Burma despite progress there, and said the United States will continue to speak clearly about the steps that must be taken for Burma's government to have a better relationship with the United States.

Later Thursday, Obama visits Australia's air base in Darwin, becoming the first U.S. president to do so.

Late Wednesday night, Obama praised the enduring bond between Australia and the United States, telling dignitaries gathered in the Great Hall at Parliament House that it is about "knowing we've got each other's backs."

During a speech to dignitaries gathered in the Great Hall at Parliament House for an official dinner, Obama said Australia and the US had been able to rely on one another as allies in times of hardship, and referred directly to some seminal points in history.

"In some of our darkest moments when our countries have been threatened, when we needed a friend to count on, we've always been there for each other at Darwin, at Midway, after 9/11 and after Bali," he said. "It's that moment in the midst of battle, when the bullets are flying, and the outcome is uncertain, when Americans and Aussies look over at each other knowing that we've got each other's backs . . . Knowing in our hearts no worries, she'll be right."