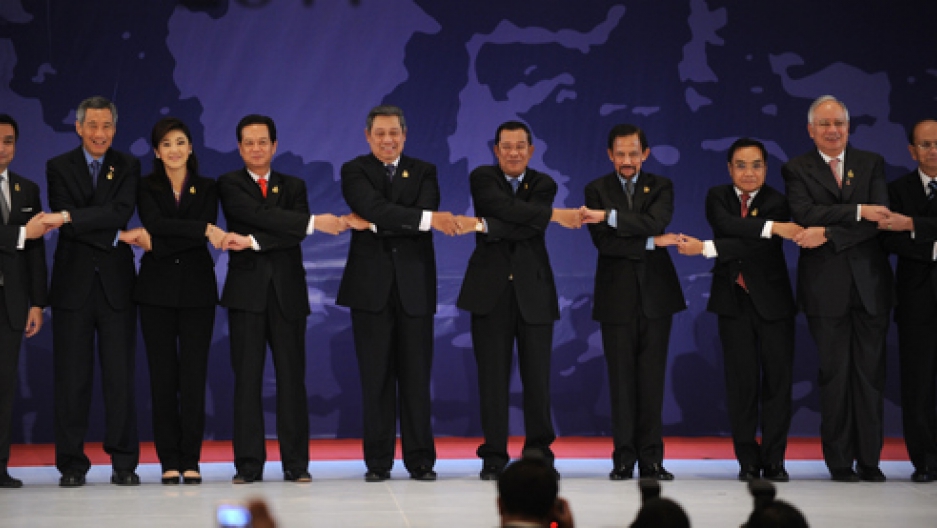 Believe it or not, this is serious business. Shown here linking hands for a publicity shot during the opening of the 19th summit of the Association of South East Asian Nations (ASEAN), the leaders and representatives of ASEAN may be poised to take on greater importance as Obama reboots America's Asian agenda.
Credit: ROMEO GACAD
Share

The Association of Southeast Asian Nations (ASEAN) has never been all that important.  But U.S. President Barack Obama's pledge to reboot America's role in Asia could change that, as well as offer a new opportunity for India to broaden its influence over world affairs.

Here's India's C. Raja Mohan on what it means:

Unlike in the past, India need not be a mute spectator to the changes in the balance of power around it. It is in a position to influence the direction and shape of the content of the structural change unfolding in Asia and elevate its own standing as a great power.

The Bali summit marks the emphatic return of the United States to Asia’s centrestage. After being the anchor of Asia’s security system since the end of World War II, the US seemed to turn its back on the region in the last two decades.

Mohan goes on to detail how and why the U.S. withdrew from Asia-Pacific affairs, and why Beijing's moves to stake territorial claims in the East and South China Seas have increasingly united the region's powers against it.

So what's the deal?

The first is the economic. Until now, East Asia accepted the centrality of China in promoting regional economic integration. The principal vehicle for this has been the “ASEAN Plus Three” structure that brought the 10 Southeast Asian nations together with China, Japan and South Korea. The region is now actively considering an alternative, the so-called Trans-Pacific Partnership.

Launched originally as a modest initiative for deeper integration among the most liberal trading nations by Singapore, Brunei, Chile and New Zealand, it has now been adopted as the future template by the US. Japan, Australia, Malaysia, Vietnam are among those backing the TPP. Beijing sees it as a mechanism to exclude China in the name of tougher standards of trade liberalisation.

The second is in the political arena. Only a few years ago, even the closest allies of the US, including Japan, Australia and Korea, were drifting towards neutrality between Washington and Beijing. Today, they are all eager to reinforce their longstanding alliances with the US.

The traditionally non-aligned Southeast nations too are drawing closer to the US as they contemplate the future of East Asia under China’s shadow. Washington in turn is ready to build new strategic partnerships with countries like Vietnam, Indonesia and Malaysia.

Washington is also standing up with the smaller nations of Asia in their intensifying maritime territorial disputes with China. While the US does not take sides in these disputes, it has emphasised American interest in a peaceful resolution of the competing claims in the South China Sea according to accepted principles of international law.

Beijing in contrast prefers to talk with its neighbours bilaterally and is likely to oppose any discussion of the territorial disputes and the larger question of maritime security at the East Asia Summit this week.

The third is the military. There has been much concern in Asia about the military staying power of the US amidst the economic crisis and the growing pressure to cut the defence budget.

The Obama administration has outlined plans to reorganise its global military deployments in order to ensure a credible presence in Asia and its waters. Before arriving in Bali, Obama will announce the establishment of new military facilities closer to Southeast Asia in north-western Australia.

Washington is also rethinking its military doctrine. As it confronts China’s rising naval and missile capabilities in the Western Pacific, Washington is expected to announce a new doctrine called “air-sea battle” that will counter Beijing’s attempts to push the US navy away from the Asian littoral.

All that could be important for Manmohan Singh.  India is the pre-imminent naval power in the Indian Ocean and already playing for the loyalties of neighbors like Burma and Vietnam -- who are souring on China as it pushes harder and harder.