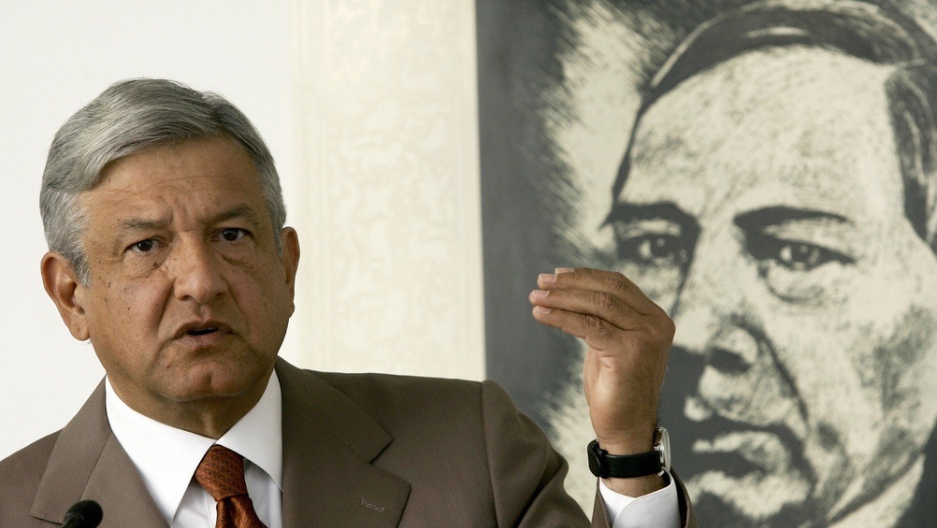 MEXICO CITY, Mexico — The death toll in Mexico’s drug war has topped 50,000 in five years. Soldiers and marines are accused of widespread human rights abuses. Officials have been assassinated or died in mysterious air crashes.

But the whole mess can be cleared up in the first six months of a new administration. At least, that's the campaign pledge of Andres Manuel Lopez Obrador, the silver-haired presidential hopeful of the Mexican left.

Lopez Obrador, also known as “El Peje” after a tough fish from his native state of Tabasco, has jumped into the drug-war debate this week after winning the candidacy of three leftist parties for the 2012 presidential race.

A lifelong defender of Mexico’s poor and downtrodden, the 58-year-old Lopez Obrador argues that soldiers should be sent back to their barracks and replaced by social workers and jobs.

Read More: Cartels reach into the US

“You can’t fight violence with violence,” Lopez Obrador said on national radio Wednesday. “We need a loving republic. We need opportunities for young people so they don’t fall into the arms of organized crime.”

Between now and the election day in July, Lopez Obrador says, he will convince the Mexican people for a new peaceful approach — as opposed to the military policies of the present President Felipe Calderon or the former ruling Institutional Revolutionary Party.

Calderon's war on drug cartels, the leftist candidate said, has been a disaster for Mexico, unleashing more bloodshed and destroying the economy.

Lopez Obrador has a history of deep rivalry with Calderon.

In the 2006 presidential election, Calderon and Lopez Obrador ran against each other in a tight race that was characterized by mudslinging.

Calderon, who is from the conservative National Action Party, accused Lopez Obrador of being a raving populist who would plunge Mexico into crisis.

After Calderon won by less than 1 percent — the closest margin in Mexican history — Lopez Obrador alleged electoral fraud and blocked the streets with tent cities in protest.

As he led demonstrations, Lopez Obrador called Calderon a “fascist” and said the president was part of a “mafia of power.”

However, since winning the candidacy again, Lopez Obrador has moderated his comments, switching his focus to pacifying Mexico and fighting corruption.

“The biggest enemy of Mexico is dishonesty. That is the cause of so many of our problems,” he said.

A former mayor of Mexico City, Lopez Obrador said he would govern along the lines of Brazil’s former president Luiz Inacio Lula da Silva rather than Venezuela’s more polarizing Hugo Chavez. He won’t wage class war, he says, but will work with businesses for social democracy.

Lopez Obrador does not explicitly argue for legalizing drugs but on changing priority from law enforcement to the causes of violence.

“Rather than just trying to capture the gangster Joaquin 'Chapo' Guzman, he wants to look at why young people follow Chapo,” said historian Lorenzo Meyer.

Running against Calderon’s war on drug cartels will likely prove popular in a country where many are fed up with daily shoot-outs between soldiers and gangsters.

Calderon himself is prohibited by the Constitution from running for a second term, but all potential candidates from his party trail in the polls.

Calderon’s administration is also in disarray after the interior secretary — the equivalent of a vice president — died in a helicopter crash last week and has yet to be replaced.

While officials say it was a tragic accident, many on the street say he could have been assassinated. Back in 2008, another former interior secretary died in a plane crash, stoking conspiracy theories.

But Lopez Obrador also has to face off against the very popular candidate Enrique Pena Nieto, the former governor of the State of Mexico.

Pena Nieto is a leading figure in the Institutional Revolutionary Party or PRI, which held the Mexican presidency from 1929 to 2000.

Amid so much insecurity, many Mexicans feel they would be better off returning to the past and a government that was strong, if authoritarian.

Pena Nieto has publicly promised to continue to fight drug gangs. However, privately, many Mexicans believe that a new PRI president would be able to negotiate peace between cartels — since that was the case during seven decades of PRI rule.

The PRI governs the majority of Mexico’s states, and recently won important strategic victories in the State of Mexico and Michoacan.

A telegenic politician with a soap-opera star wife, Pena Nieto has also been boosted by relentless media coverage, on both political and celebrity shows.

However, some observers say that Lopez Obrador's popularity could mushroom and Pena Nieto's appeal could fade. The race between candidates he could be competitive in the lead up to the July election.

“Pena Nieto is at his peak now, but he can fall,” said Meyer, the historian.

“Seven months is a long time in Mexican politics.”