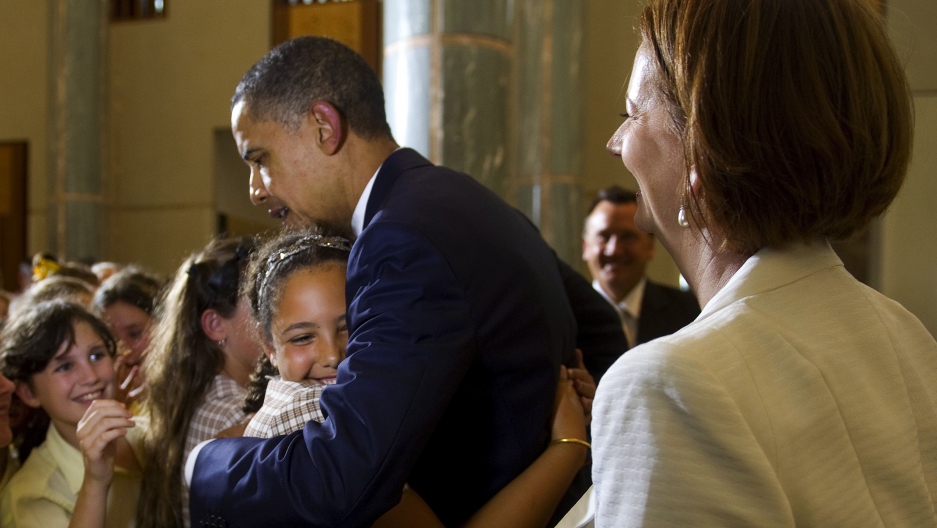 US President Barack Obama is hugged by a student as he arrives with Australian Prime Minister Julia Gillard (R) at Parliament House in Canberra on November 16, 2011.
Credit: Jim Watson
Share

President Barack Obama arrived in Australia on Wednesday on a twice-postponed visit and confirmed plans to increase the US military presence Down Under.

An increase in US troop numbers in the region is being viewed as a response to China's rising economic and military significance.

Obama flew in direct from last weekend's Asia-Pacific Economic Co-operation (APEC) forum in Honolulu, where he pronounced that "American leadership is still welcome" in the region.

"The United States is a Pacific power and we are here to stay," Obama said emphatically. "There's no region in the world that we consider more vital than the Asia-Pacific region."

Obama touched down in the Australian capital, Canberra, at 3:09 p.m. local time for what is essentially a pit-stop — due to last about 27 hours — on his way to the Association of Southeast Asian Nations (ASEAN) Summit in Bali, Indonesia.

Australian Prime Minister Julia Gillard began a joint press conference with the president by confirming that a 2,500-strong US Marine air-ground task force would based in the Northern Territory (NT).

Gillard, sounding nervous, announced "joint initiatives to enhance our alliance" and went on to detail defense co-operation measures previewed in GlobalPost and other media.

(GlobalPost reports: Why are US forces headed Down Under?)

Meanwhile, Marines will begin using facilities in Darwin, the NT capital, for training and war games, while American warships will increasingly utilize naval facilities near Perth in Western Australia.

Obama, who opened his address to the press conference with "G'day everybody," said of the deployment:

"This rotational deployment is significant because what it allows us to do is to not only build capacity and cooperation between our two countries, but it also allows us to meet the demands of a lot of partners in the region that want to feel that they're getting the training, they're getting the exercises, and that we have the presence that's necessary to maintain the security architecture in the region."

Obama, will also discuss a range of regional economic and security issues during a speech to Australian legislators in Canberra.

As far back as 2010, Obama  indicated that his administration felt the US had an "enormous stake" in the region and intended to play a leadership role in Asia.

According to Bloomberg, Obama told ASEAN leaders gathered in New York that US exports to Southeast Asia supported millions of jobs and that Washington would be pursuing additional trade relationships.

Predictably, the first question asked of Obama from press gathered for his arrival in Canberra on Wednesday was about China.

Asked whether the security agreement was a direct attempt to counter China's rise in the region, the president responded:

"We welcome a rising peaceful China. What they've been able to achieve in terms of lifting hundreds of millions of people out of poverty has been nothing short of remarkable.

"The main message that I've said not only publicly but also privately to China is that with their rise comes increased responsibility.

"It is important for them to play by the rules of the road."

Obama said he would give details for a "deepening of the alliance" with Australia in his speech to parliament on Thursday. He would then fly north to Darwin, and the Australian military facilities intended to accomodate the majority of the future US troop deployment Down Under.

He twice canceled visits to Australia — in March 2010, in order to pass healthcare reform legislation, and in June 2010 amid the Gulf of Mexico oil spill.

A home page photo of Obama hugging a schoolgirl in the Sydney Morning Herald ran with the headline, "POTUS gets the love."

Little wonder that Obama said he felt "thrilled to be Down Under."