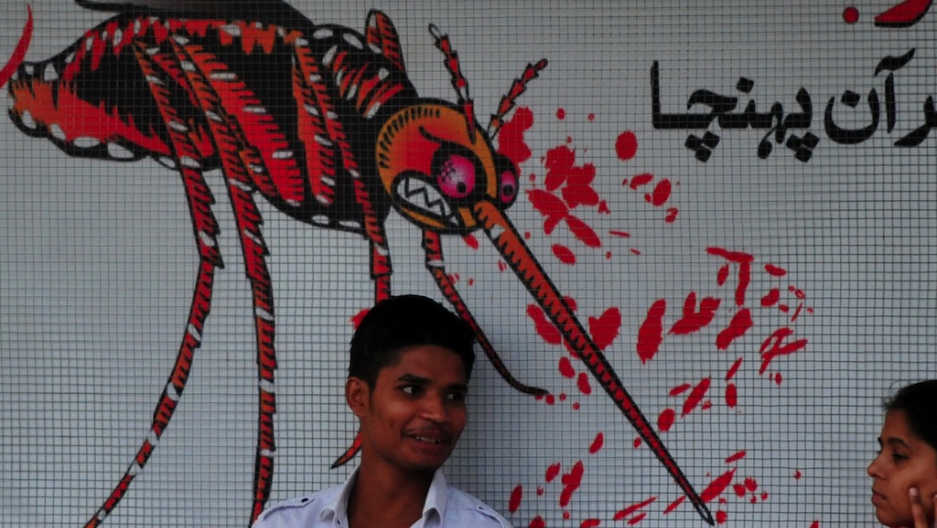 A Pakistani man sits in front of awareness advertisement against the dengue fever, a deadly tropical disease, in Islamabad
Credit: FAROOQ NAEEM
Share

Spiking fever, searing muscle and joint pain, shock, blood seeping through the skin, and possible death—the most severe form of dengue fever can inflict unspeakable misery. As a pediatrician in my native Kenya, it’s incredibly troubling to see the pain and suffering caused by the recent outbreak of dengue.

Dengue, also known as “breakbone fever,” is a painful and sometimes fatal viral disease characterized by headache, skin rash and debilitating muscle and joint pains. In some cases, it can lead to circulatory failure, shock, coma and death. I recently spoke at the 9th International Congress of Tropical Pediatrics in Bangkok, Thailand about the dengue situation in Africa. Neglected tropical diseases threaten the lives of millions, primarily poor populations living in tropical and subtropical climates, with children being the most vulnerable to infection.

In my own country of Kenya there is a rash of dengue fever in Mandera mushrooming rapidly and overwhelming healthcare systems, with at least 5,000 cases reported and 10 deaths since the epidemic started in early September. And the problem isn’t just in Kenya. Pakistan is reeling from its own epidemic, a particularly acute outbreak of dengue fever that has killed over 60 people, with more than 8,000 cases to date. And more dengue cases have been reported this year in the Bahamas than in any seasonal outbreak in their history, with more than 1,500 confirmed cases this year.

Today, at least 2.5 billion people – two fifths of the world’s population – are at risk of contracting the disease, making dengue the most prevalent mosquito-borne viral disease known to mankind.

While dengue is known to be endemic throughout Sub-Saharan Africa, its exact toll has been unknown, largely because effective disease surveillance systems are not in place to accurately track the disease, and its symptoms are commonly misdiagnosed as other febrile illnesses like malaria. Despite poor surveillance for dengue in Africa, however, it is clear that epidemic dengue fever caused by all four serotypes has increased dramatically.

Pandemics do not discriminate or recognize borders – and when disease carriers can crisscross the world on airplanes, everyone has a stake in global health. The immediate risk of a dengue epidemic rapidly crossing borders should be a signal that infectious diseases must be addressed with concerted efforts from all countries.

Currently there is no specific treatment or cure for dengue fever. Patients with access to medical care typically receive only fluids to help stave off dehydration and medication to help ease the pain. This fact only underscores that a safe and effective vaccine to protect against dengue is needed.

Vaccines have been widely touted as public health best buys. A pipeline of dengue vaccine candidates currently exists, and a viable dengue vaccine could be available as early as 2015, providing a much needed public health intervention for this growing, worldwide threat. Countries should start preparing now for a vaccine once licensed, and international groups like the Dengue Vaccine Initiative are working to help them lay this important groundwork.

Kenya can do this by developing plans for procurement and introduction, mobilizing and budgeting financial resources, and making necessary health system improvements to ensure that vaccines can be delivered swiftly and efficiently once available. The adage is that if you fail to prepare, you prepare to fail. Staying ahead of disease – and fear – requires a continued commitment to funding the breakthroughs that have already saved millions of lives. Dengue anywhere is a threat everywhere.

Were is also Associate Professor of newborn medicine at the University of Nairobi and Aga Khan University (Nairobi). He joined the University of Nairobi in 1994, where he still serves as a senior lecturer in the Department of Pediatrics. Were was the principal investigator of a PneumoADIP small grants project aimed at enhancing health worker and health administrator awareness of pneumococcal disease and vaccination in Kenya. Were is a recognized expert in pediatrics and has written extensively on newborn health.