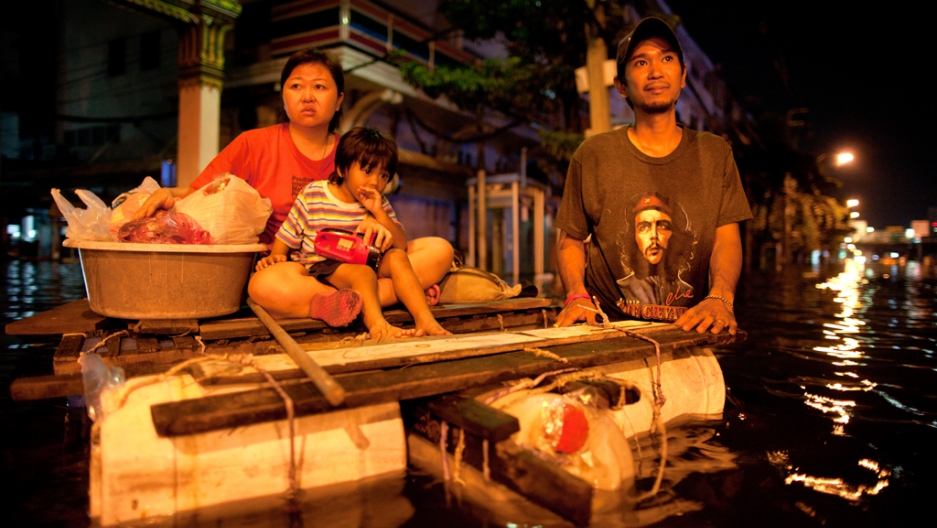 Tassaporn holds her 3-year-old son Poonawat on a makeshift raft as they wait for more supplies to bring home, Oct. 31, 2011 in Bangkok.
Credit: Paula Bronstein
Share

So, it's still flooding in Thailand.

A sad reality that has been true now for months (flooding began in late July).

The waters show no signs of abating, and will likely take months to clear out.

That fact, coupled with the reality that — independent of any floods — Bangkok has been sinking between 2 and 5 cm each year, have prompted lawmakers, apparently, to think of moving the capital elsewhere.

"The capital will face more and more problems from natural disasters and the environment," Sataporn Maneerat, one of 20 legislators from the ruling Puea Thai party behind the motion, told AFP. The main options for a new a capital are reportedly in the eastern and northeastern provinces.

According to reports, lawmakers have since tabled the motion.

Still, the idea that Bangkok would no longer be home to the nation's capital is far from the only creative solution floating around Thailand these days.

Think boats made out of empty water bottles and sporting home-made jet skis to get to school on time.

Thai Flood Hacks — a site with the tag line, "Necessity is the mother of invention" — has chronicled a slew of creative responses among Thais to the rising floodwaters.

After months of flooding, Thais are simply doing what they have to do.

More coverage of the Thai floods from GlobalPost:

Video: Will Bangkok be spared?