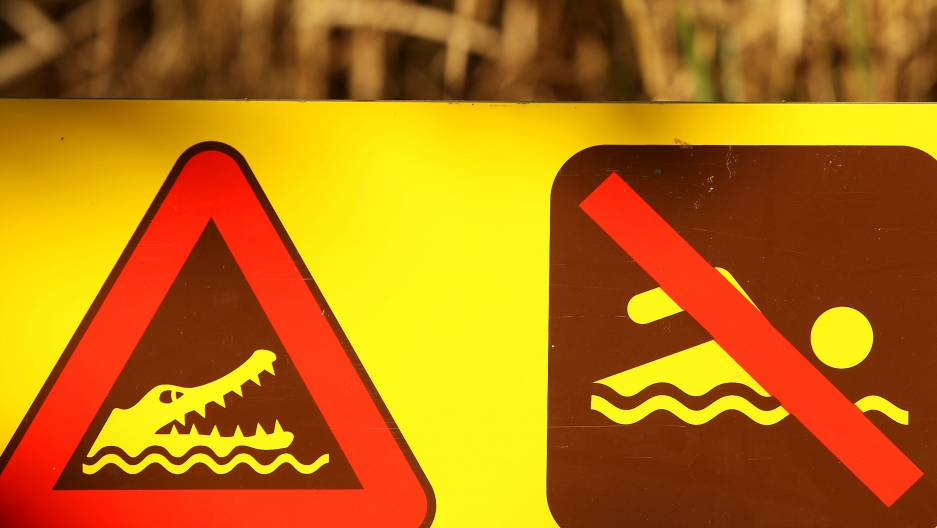 A no swimming sign warning of crocodiles is seen at Finch Bay on June 20, 2011 in Cooktown, Australia, where saltwater crocodiles make swimming and other water activities extremely dangerous.
Credit: Mark Kolbe
Share

President Barack Obama may have thought his people had thought of everything, but...

Ahead of his arrival in Australia today for a two-day official visit, the Northern Territory Government has announced that it will insure him against crocodile attack.

(More from GlobalPost on the president's Australia visit: Why are US forces heading Down Under?)

The policy from Darwin-based insurer TIO will pay out 50,000 Australian dollars if Obama — who flies into Darwin with his family on Thursday — is fatally attacked by one of the reptiles.

Darwin is the capital of the Northern Territory — the heart of "Crocodile Dundee" country, as News 24 helpfully puts it — home to a good proportion of the country's deadly estuarine (saltwater) variety of crocs.

An average of two people are killed each year in Australia by "salties," which can grow up to 23 feet long and weigh more than a 2,200 pounds, according to News 24.

"The president will have total insurance against crocodile attack whilst he's here in the Northern Territory," Australia's ABC News quoted the NT chief minister Paul Henderson as saying. "And if he gets too close to the cliff's edge there overlooking the harbor [where crocodiles are reportedly routinely spotted], he will have insurance in the event of any crocodile attack."

"It's a unique product for a unique environment and we're excited to be issuing one of these policies for Obama as a memento of his time in the Territory," chief executive Richard Harding said.

TIO — which stands for Territory Insurance Office — has been selling $10 crocodile attack cover notes for 23 years.

Naturally, the NT government will pick up the tab for the first US president to visit their fair (and fairly dangerous) shores.

According to News 24, park Territory park rangers harpooned a 14-foot "monster" that had been terrorizing fishermen at a waterhole northeast of Darwin.

It was one of nearly 200 of the man-eaters trapped in the territory in the first half of the year.