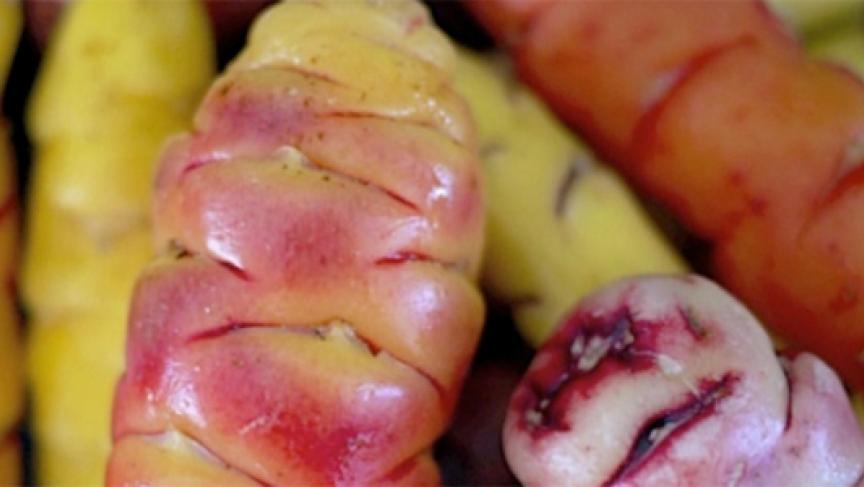 Ocas are just one of the native crops in Peru that are experiencing a resurgence in popularity. (Photo by Cynthia Graber.)

If you’re like most people, when you think of Peru's most famous food, you probably think of the potato.

Potatoes originated in Peru, and there are thousands of varieties in the country. But there’s a lot more to Peruvian food than potatoes — even at the International Center for the Potato.

In an ICP research field near the Andean mountain town of Huancayo, a group of local men and women rip into a patch of dark soil and yank up tubers in a shocking array of colors. They range from fuchsia to dark orange to a light yellow that fades all the way to dark purple, and they’re among the 700 hundred or so varieties of indigenous Peruvian crops known as oca, olluco and mashua.

Peru has one of the most varied food cultures in the world, with highly diverse growing regions from the Andes mountain range to the Amazon rainforest in the east to the Pacific coast in the west. If you’re a foodie, you may have noticed that Peruvian cuisine is suddenly popular in the United States.

Not long ago, many of the country’s indigenous crops were falling out of favor. But that trend is being reversed through the cooperation of Peruvian chefs and ICP researchers like Ivan Manrique.

Manrique and his colleagues grow Andean crops in research plots here in Huancayo, and then analyze them in the lab.

“We’ve done DNA studies,” Manrique said, “and we’ve found that each one is different.”

Some crop varieties are high in proteins or antioxidants, Manrique said, others in vitamins or medicinal properties. Some, he said, even contain chemical compounds that haven’t been found in any other species in the world.

That’s important because, as in much of the rest of the world, agriculture in Peru is facing big challenges from temperature and precipitation changes as a result of climate change. Many of the ancient crops being studied are hardy ones that grow in tough conditions.

Manrique points to a bulbous root called maca as an example of a hearty and highly valuable crop. For hundreds of years, he said, it was valued as a high-energy food. Incan warriors even carried it with them on trips to expand their empire.

Manrique said it’s also exceptional because it grows at altitudes nearly 15,000 feet, almost three miles, above sea level, where no other crop can prosper. It’s also very nutritious, Manrique said, and there are signs it can improve libido and fertility in men.

It’s that last quality that’s helped save it, Manrique said. Twenty years ago, maca was on the verge of extinction, but today, it’s grown on more than 5,000 acres in Peru. The ICP’s goal is to save as much more of Peru’s rich crop biodiversity as possible.

Meanwhile, down from the mountains in Lima, the effort is getting help from the man who just might be the most popular Peruvian alive today — Gaston Acurio.

Acurio is a chef and entrepreneur, with dozens of restaurants here in Peru and around the world and a cooking show on TV.

His flagship restaurant in Lima, called Astrid y Gaston, was recently named one of the top 50 in the world. Until a few years ago, Acurio said, it leaned French, because Peruvians felt they were a third world country that had to import culture from Europe.

But one day, he said, “we discovered we have a very rich cultural diversity.”

It was an epiphany.

“We understood that as cooks we have a big glorious responsibility of representing our biodiversity and our culture with what we are doing, which is cooking,” Acurio said.

In only a few years, Novo-Andina took Peru – and the world – by storm, and the demand for Peruvian crops took off. Consumption of native potatoes, for instance, increased 50-fold between 2005 and 2010.

“That’s cooks, that’s my generation,” Acurio said. “We did that.”

And the appetite for native Peruvian foods didn’t stop with potatoes. Acurio pointed to a native fruit called the camu camu as another example.

“This fruit, camu camu, was all the time in the Amazon,” he said, “but nobody knew of it in Lima. So as cooks we started to tell the customers about this product. And now you can see camu camu in the supermarkets ... in every bar there are sours with camu camu.”

There are some native foods, however, that Peruvians haven’t yet embraced.

The grain quinoa, for instance, is quite popular in the United States, but it can be hard to find in restaurants in Lima, because many consider it a poor man’s food.

Like Manrique, Acurio believes changing that mindset will help preserve Peru’s food biodiversity for the future. And he relishes the challenge.