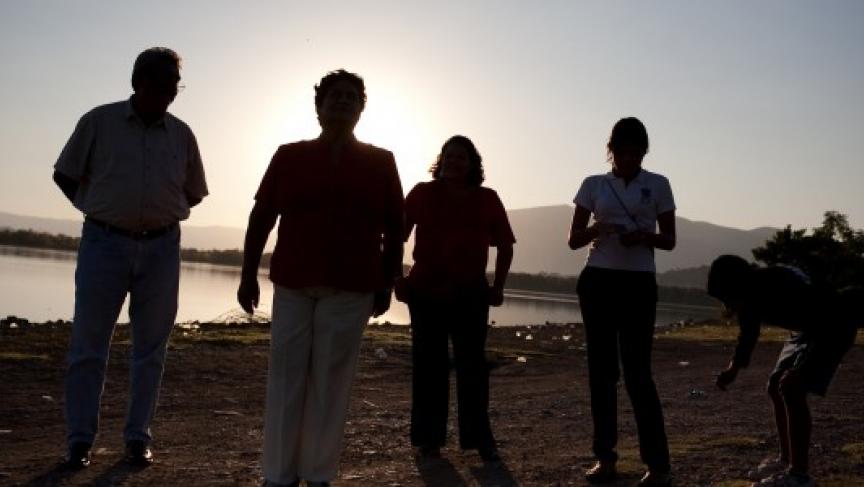 Family members of Francis Alejandro Garcia Orozco and Lenin Vladmir Pita Barrera say they have no idea where the Army took their family members, or why. (Photo by Myles Estey.)

As Mexico's war against drugs spirals violently out of control, the death toll has climbed above 40,000.

Increasingly, the military has been called upon to keep order in the most dangerous locations. Recently, violence hit the state of Veracruz — popular with tourists.

The area surrounding tourist-friendly Acapulco in traditionally violent Guerrero has become one of the most murderous in the country..

The Mexican government has responded by launching military operations in both states.

While the army retains a fairly positive image in Mexico, it also stands accused of human rights violations.

Inland Guerrero, a few hours from Acapulco, is home to one of these cases, which has torn apart six families.

It was late afternoon when Laura Garcia Orozco arrived at a nightclub in the town of Iguala. Her brother, Francis Alejandro Garcia Orozco, used to run this club.

But on a Monday night in March last year, she arrived just as a military convoy was pulling away. She hasn’t seen her brother since.

“It’s incredibly sad to be in this place, to remember the disappearance, to remember his face, the last time he looked at me that day,” Orozco said. “It’s horrible. Horrible. The only thing I want is that, in one way or another – that they bring him back.”

Francis — and five other men who worked there — disappeared from the club that night. According to their families, none had criminal records, nor were they under any official investigation.

After the men went missing, all six families say they went straight to military base 27 in Iguala to ask where their sons were.

The families say a soldier told them they didn't have anyone from the club. The families looked at each other. They hadn’t said anything about the club.

Orozco, 35, sits at her computer, reviewing footage taken that night by a security camera across from the club. The video appears to show the men being taken from the club by a convoy that includes soldiers in military vehicles.

Most disappearance cases are difficult to prove. This case stands out because there’s some formal evidence. But Orozco's older sister, Rosario, says it hasn’t helped.

“We’ve asked everyone,” Rosario Garcia Orozco said. “The federal prosecutor’s office, the defense department, the national human rights commission – all say they have no idea or that they are unable to help.”

In the last five years, more than 6,000 official complaints of human rights abuses have been filed against Mexico’s security forces. According to Nik Steinberg, Mexico investigator for the group Human Rights Watch, convictions are rare.

“No matter whether the case is investigated in the military justice system, or the civilian justice system, there is almost never a solider or police officer held accountable for these crimes,” Steinberg said. “So no matter how much evidence there is, and how clear it is that security forces have perpetrated these horrific abuses, they’re never held to book.”

“One of them, for example is that all soldiers, who commit human rights abuses, must be prosecuted in a civilian court, because the military justice system in Mexico has proven to be completely biased, and unable to punish soldiers who commit abuses,” Steinberg said. “Mexico, year after year, has failed to meet these conditions, and year after year the United States has given them these conditional funds anyways.”

There's a new security operation in Guerrero. State Spokesman Arturo Martinez Nunez said an additional 2,000 soldiers and federal police have been deployed in the last few weeks to improve safety in Guerrero. He says respecting people’s rights is a top priority.

“The Mexican Army is extremely attentive and respectful of the human rights of the local population,” Nunez said. “The proof of that is that during this operation we have not had a single complaint. If there was one, we would be the first to address it, because we need the people on our side.”

Back in Iguala, the Garcia Orozco family doesn’t feel entirely safe. They say they’ve been followed, intimidated, threatened and repeatedly told to stop pursuing the case of their son and brother. Four of the other five families involved have already given up.

But Rosario Garcia Orozco, echoing the rest of her family, said for the sake of her brother and the other missing men, they will not stop, despite the risks.

“You know what, a lot of people are scared – I am also scared,” Rosario Garcia Orozco said. “But it makes me more scared to think that tomorrow it would be my kids, or my grandkids, that they take away, if I don’t open my mouth and say “today, this is happening, this is a reality, and that this is how they are hurting many families.”