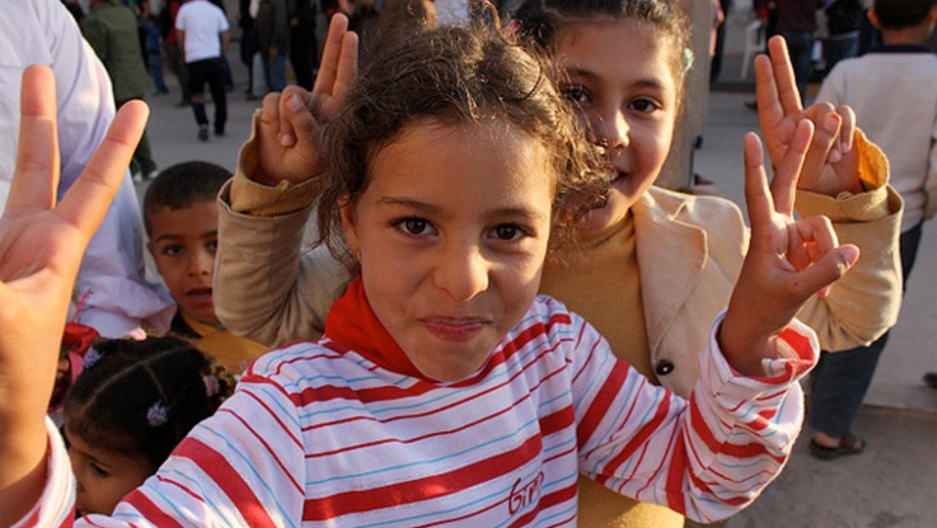 Young girls in Benghazi accompany their father to a one of the many demonstrations in support of the rebels near the city's main courthouse. (Photo from Al Jazeera English.)

Since the toppling and death of former Libyan president Moammar Gadhafi, change is the watchword in Libya.

A new prime minister has been named, a new transitional government is expected, and portraits of fallen martyrs are replacing pictures of Gadhafi in public spaces.

But perhaps one of the most crucial changes is happening in more discrete locations: in schools, all across the country.

Over his more than four decades in power, Gadhafi used schools to indoctrinate Libyan citizens.

From primary to university level, Libya’s curriculum is being cleansed of Gadhafi’s influence.

“We don’t want anything that signifies him – neither his name, his family, nor his symbols and signature green color,” said Mohammed Sawi, director of the National Curriculum Reform Office, which is based in Tripoli.

For now, Libyan experts are doing an initial, rapid purge of the most flagrant pro-Gadhafi ideas. According to Sawi, the larger task of long-term revision will start when a new government is elected in eight months

“There are no foreign experts because what we are doing is provisional, for one year,” Sawi said. “After that, experts will be brought in from abroad and we will do an international conference to see what we can do in term of broader changes to the curriculum.”

For now, the easiest change is getting rid of subjects like Al-Mujtama Al-Jamahariya, the study of the “Green Book” – Gadhafi’s treatise on politics and civic life.

But beyond that, many others subjects require changes. Gadhafi, a strident anti-colonialist, refused to allow what he considered “Western” symbols – for instance, “cm” for centimeters and “kg” for kilogram. Hatem Mhenni, a member of the reform committee, said all symbols in Libyan education will be changed to meet international norms.

“We changed all the symbols that were in Arabic before into Latin script,” Mhenni said. “We corrected many spelling errors and technical errors as well.”

History is being rewritten from scratch. Until then, the subject has been removed entirely from the national curriculum.

“Gaddafi was afraid that the students or their parents could revolt at any time, so it was important that they feel far from each other,” Chawadi said. “So in the maps, he created a big separation between east and west Libya – a vast, impenetrable desert – to disorient people and make sure they felt divided, not united.”

Officials have said that schools won’t have a more Islamic bent, though they will add a subject called Islamic Consciousness. But like everything else in Libya now, it’s hard to predict how schooling will change until a constitution is written and a new government is chosen.

These days, the Ministry of Education’s focus is on more immediate goals: the new, temporary curriculum and textbooks set to roll out to one million Libyan students by Jan. 14.

Until then, classes continue at places like the Rixos Technical High School in Tripoli.

“I think a lot about the future of the students and the children of this country,” Al Hajaji said. “The big challenge is the little kids who love Gaddafi and don’t know why they love him.”

Epthal Abu Bakker, 17, said whenever she used to criticize Gadhafi, other kids would tease her and beat her. Now that power has changed, Epthal can express her opinions without danger.

With the dictator gone, Libya’s future is uncertain – the country is awash in weapons, and revolutionaries are finding it hard to be politicians.

But in the country’s schools, the horizon is relatively bright.