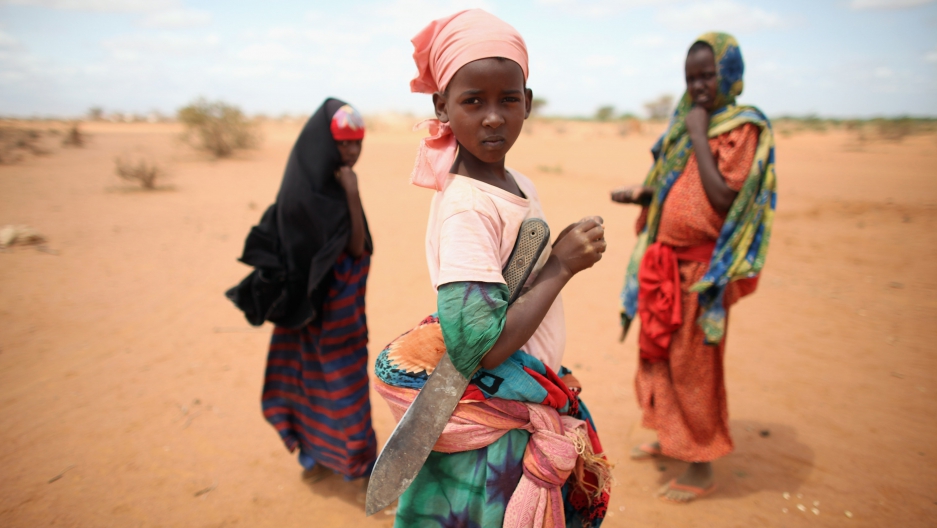 Somalian refugee children collect firewood on the edge of the Ifo refugee camp which makes up part of the giant Dadaab refugee settlement on July 22, 2011 in Dadaab, Kenya
Credit: Oli Scarff
Share

NAIROBI, Kenya — Kenya plans to use its recent invasion of Somalia to carve out a semi-autonomous client state in the south of the country, say observers whose analysis is backed by leaked US diplomatic cables.

A secure buffer state, to be called Jubaland, would be headed by a former Somali defense minister and secured by an Islamist warlord in a bid to contain Somalia’s violent chaos protecting Kenya’s borders and its tourist-driven economy.

It could also remove Kenya’s costly obligation to host Somali refugees, more than half a million of whom have fled war and famine and now live in a cluster of refugee camps at Dadaab.

But diplomats, analysts and US cables published recently by Wikileaks cast doubt on Kenya's chances of success.

“Kenya wants to inoculate itself against the threat of Al Shabaab and that is understandable, but creating a buffer state like Jubaland is the wrong way to go about it,” said Rashid Abdi, an analyst at the International Crisis Group in Nairobi.

Kenya blamed Somalia’s Taliban-like Al Shabaab militants for the kidnappings of four foreigners and, citing its right to self-defense under Article 51 of the UN Charter, sent its troops into Somalia in mid-October.

The speed of the invasion and widespread skepticism of Kenya’s claims of Shabaab involvement led many to suspect the operation had been planned for sometime. For its part, the Shabaab denies any involvement in the abductions.

“There is no doubt the Kenyans were desperate for a pretext to go in,” Abdi said.

Kenya’s government has admitted the operation was planned for “several months,” while analysis of diplomatic cables released by Wikileaks show discussions of a Kenya-backed state, called Jubaland, in southern Somalia date back to 2009.

Jubaland (also sometimes referred to as Azania) existed in colonial times and was ceded to Italy by Britain in 1924.

The modern version would comprise the southern regions of Lower Juba, Middle Juba and Gedo with its capital in the lucrative Shabaab-controlled coastal town of Kismayo, which brings in a large portion of the estimated $50 million a year the Shabaab earns in port revenues.

Its armed forces are the Ras Kamboni militia, a Kenya-backed group commanded by Ahmed Madobe, a bearded hardline Islamist and former governor of Kismayo. His base is the ramshackle border town of Dhobley through which Kenya’s troops entered Somalia last month.

Related: Israel gets in the mix

According to a series of leaked diplomatic cables, American and British officials were against a Kenya-backed breakaway state in southern Somalia, while the leaders of Uganda and Ethiopia privately scoffed at Kenya’s lack of military experience.

China, however, was more supportive. According to a leaked US cable in January 2010, Kenya received from China “weapons, ammunition, supplies, and textiles for making uniforms in support of the… Jubaland initiative.”

Early this year, around 3,000 Kenyan-trained Somali fighters were deployed across the border, but had less success in battling the Shabaab than hoped for. Analysts say the militias’ failure to secure the buffer zone drove Kenya to look for a reason to deploy its own troops to do the job.

“The initial Kenyan strategy was to use the boys recruited from refugee camps to push Shabaab back, but when Plan-A did not work they had to find Plan-B,” said Abdi.

Up to 2,000 Kenyan troops, backed by tanks, jets and helicopter gunships are fighting alongside the Ras Kamboni militia, planning to launch their first major assault on the town of Afmadow in the coming days before continuing a slow advance through heavy rain and thick mud towards Kismayo.

The presence of Kenyan troops in the frontlines has changed the face of the Jubaland plan, removing the mask of Somali control. Diplomats and analysts are worried that it might condemn the initiative to failure, or worse, provoke further conflict.

Foreign forces have a poor track record in Somalia. Their presence often becomes the catalyst for unifying splintered clan-based militias against a common enemy.

Somalia’s President Sheikh Sharif Ahmed has expressed anger at Kenya’s military intervention, seeing the establishment of another self-governing region as a further diminution of his already meager authority.

Ethiopia’s Prime Minister Meles Zenawi is concerned that a powerful administration in southern Somalia might embolden or even support Somali irredentists in the Ogaden.

“Kenya is playing a dangerous game,” warned Abdi, pointing out that there is already friction between Madobe, the bush-fighter, and Gandi, the politician. “Even if [Jubaland] was created, there is no guarantee that Madobe would not rise up against Professor Gandi if he is declared president,” he said.

Already Gandi seems out of the loop: sources say he was not consulted ahead of Kenya’s invasion, while on the ground, Madobe’s forces are advancing alongside Kenyan troops.

“If Kenya reaches Kismayo, then turns to its Somali allies and says, ‘Now you govern’ it will invite a war,” predicted Professor Ken Menkhaus, a Somalia expert at Davidson College, North Carolina.

Menkhaus pointed out that clans have fought over Kismayo almost non-stop for the last 20-years. Like diplomats in Nairobi he is concerned at Kenya's apparent lack of an exit strategy.

Jubaland’s inspiration is the breakaway state of Somalialand and self-governing administrations of Puntland, Galmudug and Himan and Heeb in northern Somalia, all of which enjoy a degree of stability not seen elsewhere in the country.

Roger Middleton, an analyst at London’s Chatham House, says that their legitimacy is based on grassroots support established between the clan elders and warlords who have held power locally since the collapse of the Somali state in 1991.

A Jubaland administration seen as a Kenyan proxy will not enjoy the same local backing.

“This is now completely driven by Kenya, with Somali politicians following behind an armed intervention, and that is not a good recipe for earning legitimacy in local eyes,” said Menkhaus.